UPDATE: Get a taste of the action in the clip below!

UPDATE: Check out the latest images from the film via ENTERTAINMENT WEEKLY! 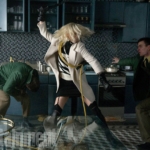 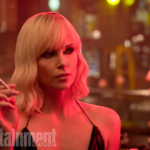 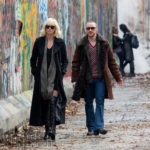 UPDATE: The FIRST Poster (above) is here revealing the new title of the film as ATOMIC BLONDE (formerly known as ‘The Coldest City’).

OFFICIAL SYNOPSIS: Oscar® winner Charlize Theron explodes into summer in Atomic Blonde, a breakneck action-thriller that follows MI6’s most lethal assassin through a ticking time bomb of a city simmering with revolution and double-crossing hives of traitors.

The crown jewel of Her Majesty’s Secret Intelligence Service, Agent Lorraine Broughton (Theron) is equal parts spycraft, sensuality and savagery, willing to deploy any of her skills to stay alive on her impossible mission. Sent alone into Berlin to deliver a priceless dossier out of the destabilized city, she partners with embedded station chief David Percival (James McAvoy) to navigate her way through the deadliest game of spies.

‘Atomic Blonde’ is set to open in theaters on July 28th.

UPDATE: According to VARIETY actor JAMES MCAVOY (X-Men: Days Of Future Past, Wanted) will be joining Charlize Theron in THE COLDEST CITY! 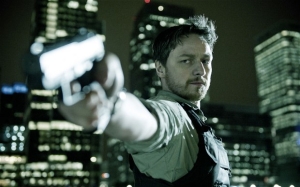 Written by KURT JOHNSTAD (300, Act Of Valor), the film follows “an undercover MI6 officer who turns up dead on the eve of the fall of the Berlin Wall, and a female super spy by the name of Lorraine Broughton (Theron) must find the list he was smuggling into the West – a log containing the names of every espionage agent working undercover in Berlin. Broughton delves into an underground world of counter-intelligence, defections gone awry and secret assassinations to recover the list, risking her own life to save the lives of the British agents. But, in this world of deceit and double-crossing, one never knows who is working for whom or can really be trusted.”

UPDATE: With the recent announcement of Chad Stahelski helming ‘John Wick 2’ on his own, now we know why David Leitch left the project. With the conflicting production schedules of ‘John Wick 2’ and ‘The Coldest City’ set for this fall, the duo had to make the decision to split apart to handle BOTH projects. LEITCH will now direct Charlize Theron in ‘The Coldest City’ solo.

The film starts shooting November 16th in Budapest on a $30 million budget.

Based on a graphic novel by Antony Johnston, THE COLDEST CITY is set to star CHARLIZE THERON (Monster). Joining Theron on the project are action maestros, directors DAVID LEITCH & CHAD STAHELSKI! The two most recently directed the highly received Keanu Reeves’ action vehicle ‘John Wick’ and also previously served as second unit directors on such blockbusters as ‘Captain America: The Winter Soldier’ and ‘The Wolverine’.

‘The Coldest City’ will see Theron playing “a super spy who springs into action after an underground MI6 officer is killed just before the fall of the Berlin Wall. She must find a list he was smuggling into the West to protect herself and the counter intelligence community. It becomes a game of double-crossing as agents play out global agendas.”

Combine a $30+ million budget with action direction from two of the BEST in Hollywood today (Leitch & Stahelski) with a bonafide leading lady in Theron, this could be another franchise in the making.

Theron can next be seen alongside Tom Hardy in next weekend’s ‘Mad Max: Fury Road’.

David Leitch and Chad Stahelski is also in the process of developing a sequel to ‘John Wick’ with star Keanu Reeves set to return.

Stay tuned for more details on ‘The Coldest City’!