The English-subtitled trailer for the 2-part epic live-action adaptation of the popular Anime series ATTACK ON TITAN is here!

SYNOPSIS: Mankind is under the terror of titans, a beast in which feast on human flesh. Eren Yeager, a young boy determined to make change when he himself could transform into one. He is humanity’s last hope.

Think of this as a more violent post-apocalyptic version of ‘Jack and The Giant Slayer’. 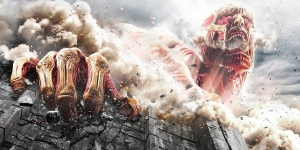 ‘Attack On Titan’ is directed by SHINJI HIGUCHI (The Floating Castle) and is set to be release in Japanese theaters on August 1, 2015, followed by the second installment ‘Attack On Titan: End Of The World’ on September 19th.

No words yet on a U.S. release, but FUNimation CEO GEN FUKUNAGA has announced that it will hit U.S. theaters later this fall.