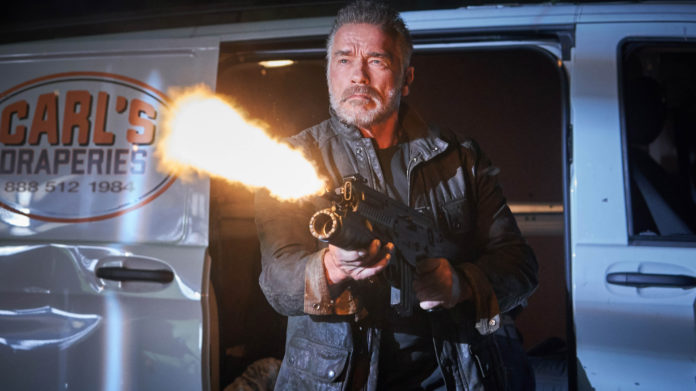 UPDATE: Check out the latest Poster and Trailer for Terminator: Dark Fate below!

UPDATE: Get behind the action in the Comic-Con exclusive featurette below!

Get a behind-the-scenes look at Terminator: Dark Fate below.

The film is now scheduled for release on November 1, 2019.

UPDATE: An official image has arrived featuring the women of ‘Terminator 6’ including Natalia Reyes as “Dani Ramos”, Mackenzie Davis as “Grace” and Linda Hamilton as “Sarah Connor”.

UPDATE: ARNOLD SCHWARZENEGGER confirmed to TheArnoldFans.com that the production start date has been pushed back:

“We are starting to shoot Terminator 6 in June to the middle of October, so I am in that. I am looking forward to coming back as the T-800 model. It’s gonna be great with Tim Miller as the director and Jim Cameron is kind of supervising the whole thing.”

UPDATE: Another familiar face is returning to the franchise and it is none other than LINDA HAMILTON!

Hamilton will reprise her iconic role of the tuff-as-nails ‘Sarah Connor’ in a new ‘Terminator’ trilogy taking place right after the events of ‘T2: Judgement Day’.

Regarding her age (60) and concerns of her jumping back into the action genre, franchise mastermind JAMES CAMERON stated:

“As meaningful as she was to gender and action stars everywhere back then, it’s going to make a huge statement to have that seasoned warrior that she’s become return. There are 50-year-old, 60-year-old guys out there killing bad guys, but there isn’t an example of that for women.”

Hamilton and Schwarzenegger will also be joined by a younger central character as Cameron added:

“We’re starting a search for an 18-something woman to be the new centerpiece of the new story. We still fold time. We will have characters from the future and the present. There will be mostly new characters, but we’ll have Arnold and Linda’s characters to anchor it.”

He kept his words when he said “I’ll be back”. Action superstar ARNOLD SCHWARZENEGGER is set to return to his most iconic role in TERMINATOR 6!

Despite the negative reception from 2015’s ‘Terminator: Genisys’, series creator JAMES CAMERON (Avatar) is determined to right the ship and produce a new trilogy in the ‘Terminator’ franchise. Directing duties on ‘Terminator 6’ will be handled by TIM MILLER (Deadpool) with a production start date in March 2018.

Confirmation came from Schwarzenegger himself stating: “In March next year, I am shooting Terminator 6. James Cameron and David Ellison are back on board.”