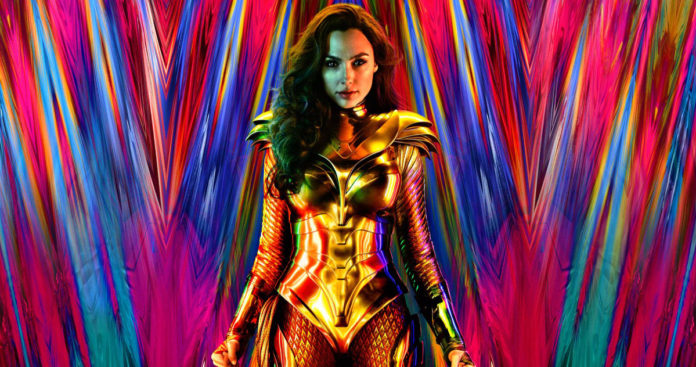 UPDATE: Wonder Woman 1984 will no longer be released on October 2nd. The film has been delayed once again to Christmas Day, December 25th and will debut in theaters and on HBO Max simultaneously.

UPDATE: The release date for Wonder Woman 1984 has been pushed back even further to October 2, 2020.

UPDATE: Due the current global epidemic concerning the coronavirus, Wonder Woman 1984 will now be released in theaters on August 14, 2020.

UPDATE: The first Trailer is here along with the set of character Posters featuring Gal Gadot, Chris Pine, Kristen Wiig, and Pedro Pascal!

UPDATE: Production on Wonder Woman 1984 has officially wrapped! Star Gal Gadot made the announcement via Instagram:

We did it. Again!! And as much as the first time shooting Wonder Woman was amazing, this time was even more unique and special.. We shot in 4 very different locations in 3 countries, and I’m so soooo proud of the almost 1000 crew members who came to set every day, giving everything they have into our movie. Couldn’t ask for better partners on this.. I’m so lucky to have the one and only Patty Jenkins, as my director. She always has our backs, she gives us the wings to dare, and everyday she helped us find the most creative version of ourselves .. I am so grateful to call her my friend. And to our AMAZINGly talented cast who made every day enjoyable and fun, thank you! Honestly.. Words cannot describe this experience.. This journey was so demanding and challenging but we all came and did our very best every take, every day, putting our all out there and I’m so proud… Thank you universe for this opportunity. I love this character. And thank you to all of you for being the best fans in the world. It was you that made me push myself every day. I’m so happy and excited, can’t wait to share it with you in 2020! ❤️ Gal

UPDATE: Best known for her comedic roles, actress KRISTEN WIIG (Bridesmaid, Ghostbusters) has officially been confirmed by director PATTY JENKINS to star as the villain ‘Cheetah’.

So excited to confirm the most thrilling news. Yes! It’s true! So incredibly lucky to welcome the sensationally talented Kristen Wiig to our Wonder Woman family. Can’t wait to finally work with one of my favorites. And SO excited by what we have planned. #Cheetah!!! @GalGadot pic.twitter.com/Gn0jICiIAH

After the disappointing box office result of ‘Justice League’, DC will try to get back on track with the next adventure of the Amazonian princess in WONDER WOMAN 2.

GAL GADOT (Justice League) will reprise her role as ‘Diana Prince’ to face off with her greatest foe ‘Cheetah’ during the Cold War era in the 1980s.

There has been many versions of ‘Cheetah’ throughout the history of ‘Wonder Woman’ but it looks like the film will go with the New 52 DC Comics version, ‘Barbara Ann Minerva’. She is “a British anthropologist who gains her superpowers after stumbling upon an ancient ritual in the lost city of Urzkartaga”. It was rumored that Oscar Winner EMMA STONE (Amazing Spider-Man 2) was offered the role but has turned it down.

Director PATTY JENKINS is once again in charge behind the camera with SAID TAGHMAOUI and EWEN BREMNER returning as ‘Sameer’ and ‘Charlie’. Despite his heroic faith at the end of the first installment, leading man CHRIS PINE is surprisingly also set to return as ‘Steve Trevor’. Production starts rolling this May in the UK.