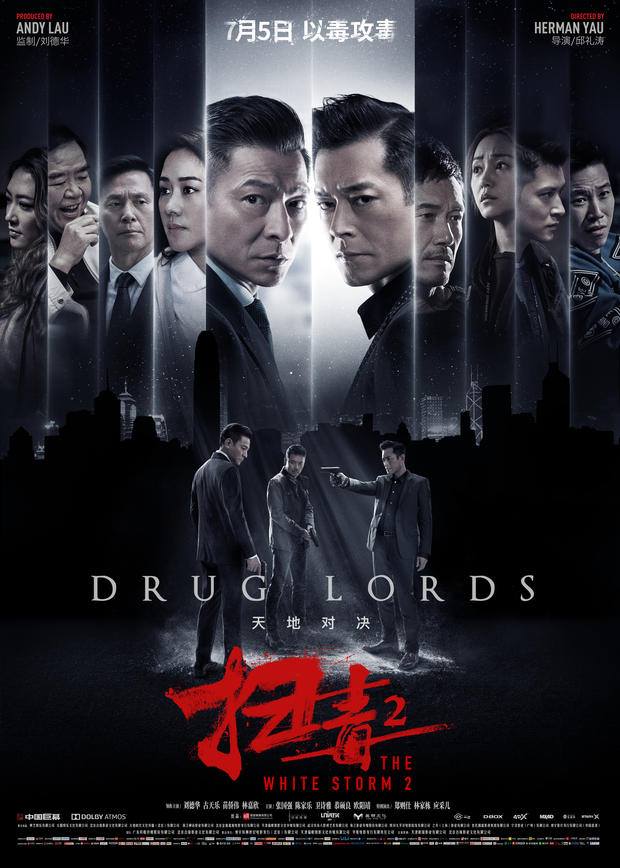 UPDAT: Check out the latest Trailer and Poster (above)!

UPDATE: The explosive Teaser Trailer for The White Storm 2 – Drug Lords is here!

SYNOPSIS: In the quadripartite drug market in Hong Kong, drug dealer Jizo (Louis Koo) gradually expands in collaboration with some Mexican drug lords across the border, followed by a chain of dog-eat-dog events which shock and bring the whole trade on high alert. On the other hand, Yu Shun-tin (Andy Lau), a former triad member who is now a philanthropist and financial tycoon, witnessed his father being consumed by drug addiction during childhood and abhors drugs as deadly foes. Therefore, Yu is offering a bounty of HK$100 million to eliminate the number one drug dealer in Hong Kong, which causes a stir in society. Chief superintendent Lam Ching-fung (Michael Miu) intends to arrest Jizo, but is now responsible for protecting Jizo instead due to the bounty. While feeling helpless, Lam is also attracted to the large bounty offered by Yu, facing a psychological struggle between good and evil. A final battle has broken out between the two tycoons who were once lesser-known brothers from the same triad.

UPDATE: Check out the image below featuring LOUIS KOO and ANDY LAU on the set!

The sequel to the 2013 hit action thriller ‘The White Storm’ is currently in production but with only one of the three leading man returning: LOUIS KOO. Sean Lau and Nick Cheung could not join him due to scheduling conflict.

HERMAN YAU (Shockwave) takes over the director’s chair for THE WHITE STORM 2: DRUG LORDS with superstar ANDY LAU (Shockwave) serving as producer and filling in as the co-lead alongside Koo. The last time Lau and Koo collaborated was over ten years ago on 2007’s ‘Protégé’.

This sequel is said to be unrelated story-wise to the original with the only similarity being the title and its leading man (Koo). Veteran actor MICHAEL MIU (Brothers) is rumored to be joining the cast as the third lead.