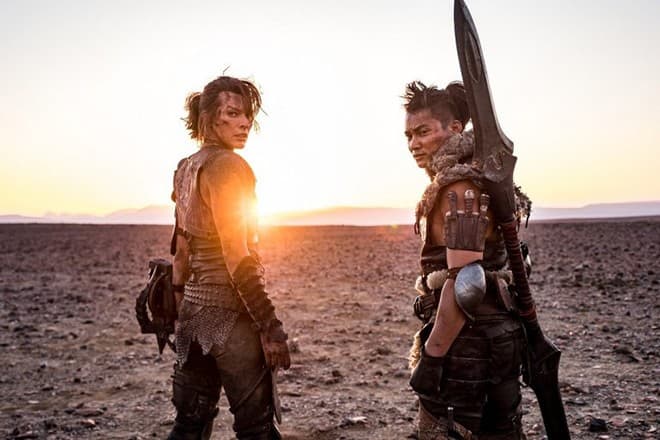 UPDATE: Have a look at the international Trailer for Monster Hunter featuring more Tony Jaa! The film is set to hit theaters on Christmas Day, December 25th.

UPDATE: Check out the first Trailer for Monster Hunter confirming a release date change from September 4, 2020 to December 2020.

UPDATE: The Official Posters are here!

Monster Hunter is set for release on September 4, 2020.

UPDATE: Check out the first official image (above) featuring Milla Jovovich and Tony Jaa along with the synopsis below!

“Behind our world, there is another: a world of dangerous and powerful monsters that rule their domain with deadly ferocity. When an unexpected sandstorm transports Lt. Artemis (Milla Jovovich) and her unit (TI Harris, Meagan Good, Diego Boneta) to a new world, the soldiers are shocked to discover that this hostile and unknown environment is home to enormous and terrifying monsters immune to their firepower. In their desperate battle for survival, the unit encounters the mysterious Hunter (Tony Jaa), whose unique skills allow him to stay one step ahead of the powerful creatures. As Artemis and Hunter slowly build trust, she discovers that he is part of a team led by the Admiral (Ron Perlman). Facing a danger so great it could threaten to destroy their world, the brave warriors combine their unique abilities to band together for the ultimate showdown.“

UPDATE: According to Hollywood Reporter Tony Jaa is confirmed to join the cast of Monster Hunter!

The plot of the $60 million budget film has not been revealed but the premise of the original game follows “an ordinary man in a dead end job discovers that he is actually the descendant of an ancient hero. He must travel to a mystical world to train to become a Monster Hunter, before the mythical creatures from that world destroy ours”.

Jovovich will portray ‘Artemis’ and is joined by veteran genre actor Ron Perlman (Hellboy) as ‘Admiral’, leader of the Hunters’ crew, rapper-turned-actor T.I. Harris (Ant-Man & The Wasp) as a sniper named ‘Link’, and martial arts star Tony Jaa (Paradox) as ‘The Hunter’, who announced his involvement with the project via Twitter.