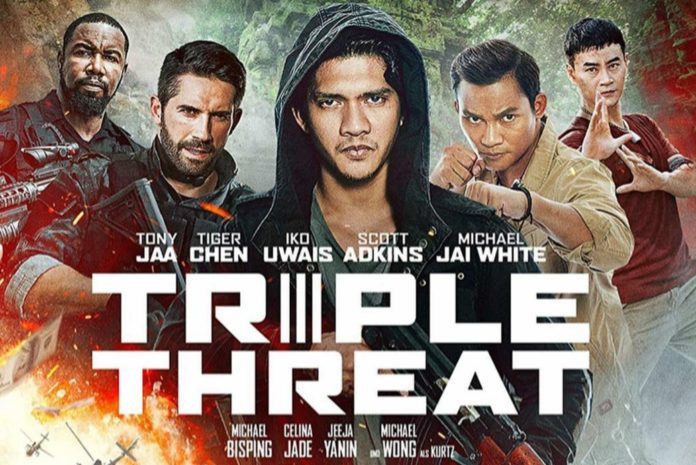 UPDATE: Have a look at the latest images from Triple Threat!

UPDATE: The wait is OVER! After the film debuts in China on February 28, 2019, Triple Threat is opening in wide release for one night only on Tuesday, March 19, but it will then be shown in select cities as well as on Video OnDemand beginning on Friday, March 22, along with a Blu-ray release on May 14, 2019 via Well Go USA. Pre-order your copy on Amazon by CLICKING HERE.

In the meantime, check out the teaser Trailer again (which was release over a year ago) to wet your appetite.

UPDATE: SCOTT ADKINS just confirmed that he WILL be throwin’ it down with TONY JAA in the film!

UPDATE: If the cast of this film is not insane enough, a couple of butt-kickin’ femme fatale is joining in on the fun in the form of JEEJA YANIN (Chocolate) and CELINA JADE (Legendary Assassin, TV’s Arrow)!

Yanin previously worked with Jaa on 2013’s ‘The Protector 2’ and Jade starred alongside Jaa and Jai White in 2015’s ‘Skin Trade’.

UPDATE: Plot details has emerged confirming SCOTT ADKINS, MICHAEL JAI WHITE, and MICHAEL BISPING will all be the villains of the film going up against the previously announced TONY JAA, IKO UWAIS, and TIGER CHEN.

The action kicks off as “a billionaire’s daughter becomes the target of a mercenary cartel. Her only protection are two down-on-their-luck fighters and a third who has vowed revenge against the others.”

With Adkins, Jai White, and Bisping joining Jaa, Uwais, and Chen, ‘Triple Threat’ is beginning to look like they can give ‘The Expendables’ a run for their money.

According to FILM COMBAT SYNDICATE ‘Savage Dog’ director JESSE V. JOHNSON is officially at the helm (replacing the previously announced Gary Mak) with TIM MAN (Boyka: Undisputed) and the Seng Stunt Team in charge of the fight choreography.

With a cast and crew of this caliber, ‘Triple Threat’ is shaping up to be one of the most anticipated martial arts action film in a very long time. Pre-production is now underway in Thailand.

UPDATE: Martial arts star SCOTT ADKINS (Boyka: Undisputed) have openly suggested himself to be the villain of the film via Twitter!

Just the thought of Jaa, Uwais, and Adkins throwin’ it down is making my head explode! Lets hope they make this happen.

News have came out via FILM COMBAT SYNDICATE that martial arts stars IKO UWAIS (The Raid), TONY JAA (SPL 2: A Time For Consequences), and TIGER CHEN (Man Of Tai Chi) will be teaming up for a new action thriller called MAKESHIFT SQUAD!

The film will be an ensemble action flick ala a Chinese version of ‘The Expendables’. Director GARY MAK, who was the assistant director on such martial arts hits as ‘Bodyguards And Assassins’ (2009) and ‘The Grandmaster’ (2013), is set to helm with ANGELABABY (Rise Of The Legend, Independence Day: Resurgence) in talks to join as the female lead.

With a cast consisting of Uwais, Jaa, and Tiger plus who knows what other martial arts badass will potentially join, this ‘Makeshift Squad’ can definitely give the ‘Suicide Squad’ a run for their money.

Who else do you think should join the ‘squad’? Comment below!