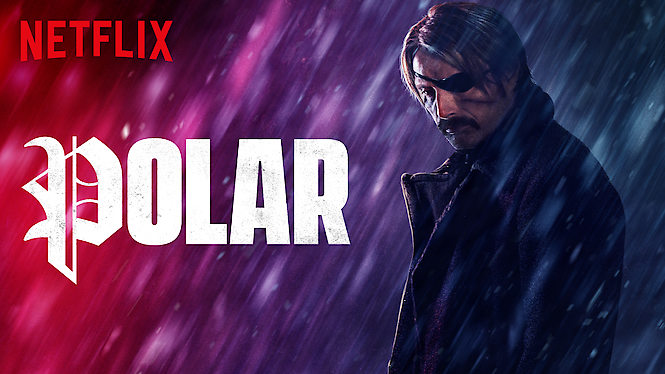 Polar generates no heat in the action department. Trying so hard to be cool and bafflingly out of touch, settles for one of those Post-Tarantino/Guy Ritchie late 90’s, early 00’s crime/assassin films, complete with trip hop beats and “cool” character names introduced on screen. Its puzzling people still make these but here is another one.

Duncan Vizla (Mads Mikkelsen) is a soon to be retired professional hitman who is haunted by late 90’s montage flashbacks and threatened with an even earlier “retirement” from his employer.

There is a shoot-out while in the nude that could have worked as a set-up, but here it is an hour in.

Jonas Åkerlund, certified quack, can’t muster up any of the vigour from his music video days to at least inject this pedestrian turn with something that moves. Main interest was the addition of editor Doobie White, who recently made something interesting with Resident Evil: Final chapter (Paul WS. Anderson). Anderson’s clean, symmetrical compositions was, it turned out, a great foil for evoking Se7en era rip-off credits and Rapid Eye Movement post-MTV editing patterns as narrative. There is none of that experimental formalism in Polar. Instead, it is toned down and more conventional. This “form” only delegated to the usual flashback/nightmare-montages. Disappointing to say the least because there is no other intention to speak of.

Polar does try to establish some unearned drama, which however, could have made for a much more interesting film. Too concerned with obnoxious assassin characters and explicit body parts, it fumbles the story arch all together and tries to pad it on as a twist.

Mads Mikkelsen and Vanessa Hudgens really deserves a better film. And how the hell is Richard Dreyfuss even in this thing?

Mikkelsen is a powerhouse and looks absolutely stunning throughout. That’s about it.