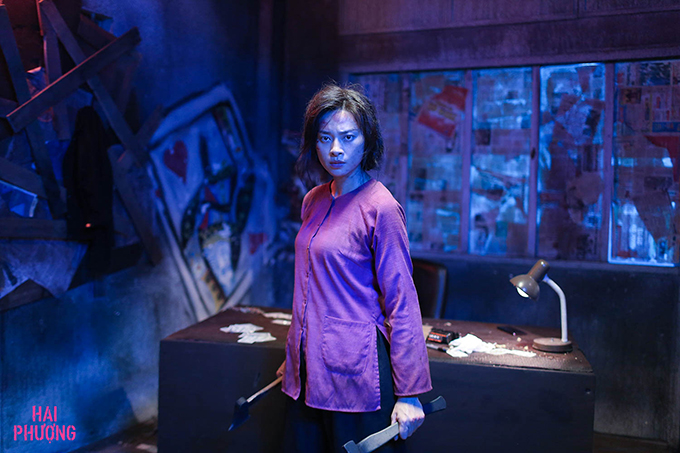 Whether you are a new or old fan of actress/singer/model/director/producer Veronica Ngo aka Ngo Thanh Van, you have no reason to miss Furie aka Hai Phuong. There is plenty for her to chew on here and director Le-Van Kiet’s action drama vehicle is a worthy endeavor.

Veronica Ngo stars as Hai Phuong, a despised single parent/debt collector, who’s daughter is kidnapped by a bunch of organ harvesters. She sets out to decimate them.

Kept simple with only a few lapses in phasing Furie is a colorful flashback heavy melodrama that delivers exhilarating hard hitting emotionally charged beat downs, sometimes lit like something from Mario Bava.

Veronica Ngo is powerful and concise in her physical performance, going at it full force and with conviction: getting thrown through furniture, pummeled to the ground and smashing glass with her head, Police Story style.

Threatening this to be her last pure action movie, it leaves you wanting more. Furie feels like a new beginning more than a conclusion and newfound fans does best digging the crates for some great, dedicated Veronica Ngo martial arts action in The Rebel (Charlie Nguyen, 2007) and Clash (Le Thanh Son, 2009), while, fingers crossed, hoping for a reconsideration and a future Furie sequel.

The stark use of reds, greens, blues and dark, dank corridors in urban spaces in contrast to opening lights, bright countryside, signals a descent. Tonal inconsistency, overall heavy handedness and some phasing problems never quite melds this form. This routine and uncertainty does not, however, impinge on the values on display. Early low key scenes of Veronica Ngo loitering and smoking hints at a more mature style giving way for the subsequent sappier approach.

Anyone interested in modern day cinematic hand-to-hand combat is urged to check out Furie. It is a faithful modernization of 80’s Hong Kong hard-boiled female action flicks.

Pre-order your Blu-Ray copy of Furie set for release on June 25, 2019 by CLICKING HERE.