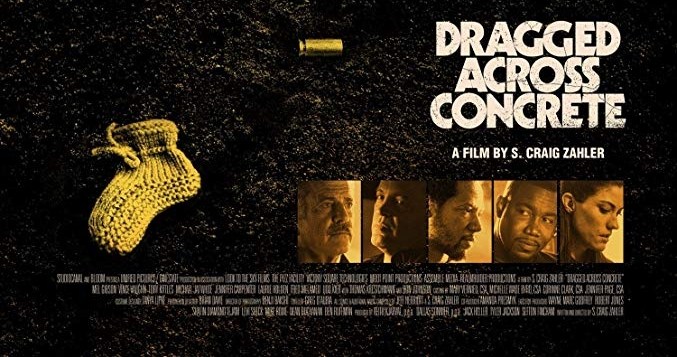 With the Hollywood of today being filled with overblown blockbusters and superhero movies, S.Craig Zahler has a unique voice that is more in line with the works of old school filmmakers like Don Siegel or Sam Peckinpah than anything that is currently filling multiplexes.

After western hybrid Bone Tomahawk (2015) and the prison set thriller Brawl In Cell Block 99 (2017), Zahler has completed his trifecta, with Dragged Across Concrete not only being his best film to date, but one of the finest American made crime thrillers to come along in some time.

The film follows Cops Ridgeman (Mel Gibson) and Lurasetti (Vince Vaughn), who have been suspended without pay after using unnecessary force. With life becoming increasingly difficult due to their lack of funds, Ridgeman comes up with the idea of robbing criminal Vogelmann (Thomas Kretschmann).

Coinciding with their story is that of Henry Johns (Tory Kittles), who is just out of prison. Along with his friend Biscuit (Michael Jai White), he is employed by Vogelman to assist on an upcoming crime. It is only a matter of time before events culminate in an explosion of violence.

Zahler has made a deliberately paced crime epic, filled with excellent performances and memorable dialogue. When required, Zahler ramps up the tension, creating a palpable sense of dread. Although Dragged Across Concrete takes its time to get to the action, when it finally comes it is shockingly violent, with Zahler thankfully preferring practical effects over CGI.

As with his previous two films, Zahler also wrote the screenplay. Similar to Bone Tomahawk and Brawl In Cell Block 99, his characters aren’t typical black and white heroes and villains, with them living in a morally grey area. In other films, his heroes could be considered the villains. The plot of Dragged Across Concrete could be classified as straight forward, but his characters and dialogue raise it above similar films in the genre.

As with his previous two films, Zahler additionally created the music for the film, showing that his talents seemingly have no bound.

On the acting front, Mel Gibson is at his steely best as a man out of time, disgusted by how modern technology is changing the world around him. He is cut from the same cloth as characters from Sam Peckinpah’s Westerns, with the modern world making them become more obsolete. Ridgeman’s old way of doing things is now frowned upon, and in this day in age of everything being constantly recorded on phones, his job has become seemingly impossible.

Gibson shares great chemistry with co-star Vince Vaughn, with their exchanges being some of the most memorable scenes in the film. This marks Vaughn’s second film with Zahler, and he gives another terrific performance. More relatable than his Brawl In Cell Block 99 character, Vaughn is the more ethical of the two leads, but only by a slight margin. Reportedly Vaughn is the one to be thanked for Gibson’s involvement, as he had shown him the script during the production of Hacksaw Ridge (2016).

Acting alongside the likes of Gibson and Vaughn could be a daunting task, but Tory Kittles rises to the challenge. Probably better known for appearing in television shows like True Detective (2014) and Colony (2016), Kittles truly shines in his role. The audience are shown his reasons for what he is doing, and in some ways he has more morals than our supposed heroes.

Kittles is partnered up in most of his scenes with action star Michael Jai White, who puts in some of his finest acting work to date. Fans of his martial arts films may be disappointed, as Jai White does not really take part in any of the films action scenes.

Jai White does however get to show off his acting chops with one particular scene being extremely memorable, more so as it is mostly done without White uttering a word, all the emotion being shown in Jai White’s eyes. What with this and the upcoming Triple Threat (2019), this is proving to be quite the year for Michael Jai White.

The supporting cast are only given limited screen time but still manage to make an impression with the material they are given. Jennifer Carpenter, who co-starred in Zahler’s Brawl In Cell Block 99, has a small but pivotal role, which leads to one of the most shocking scenes in the film.

Thomas Kretschmann is essentially the movies villain and he oozes menace, but only has limited screen time. Laurie Holden also impresses as Gibson’s wife, managing a lot in just a handful of scenes.

Best of all the supporting roles is Don Johnson, who also co-starred in Brawl In Cell Block 99. He only appears in one scene in which he shares with Gibson and Vaughn, but the writing and Johnson are so good that you wish he had more screen time.

Unfortunately it looks as if Dragged Across Concrete is only going to have a short cinema release before going to VOD. However, no matter if it is in the cinema or at home, this is one that should not be missed.