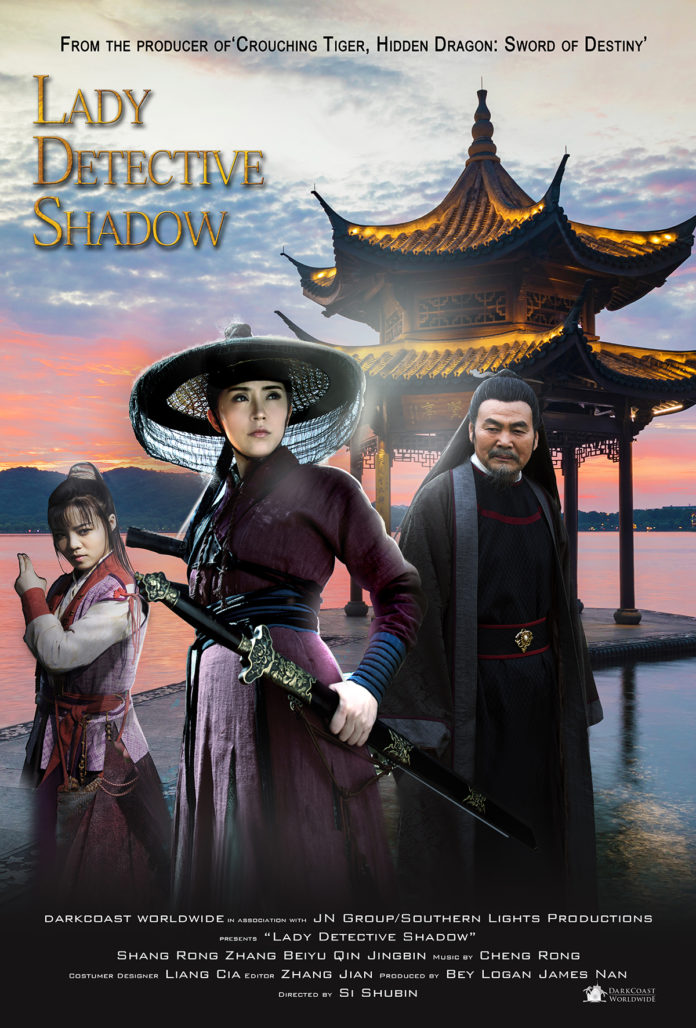 Lady Detective Shadow (2018) is an upcoming martial arts detective story that is being released without much fanfare. Clearly made with an eye on the VOD market, Lady Detective Shadow was obviously made on a low budget, with some terrible CGI and a music score that sounds as if it has been regurgitated from other movies.

The film follows master detective Sima Feiyan (Shang Rong) who is trying to solve a string of violent murders taking place in and around a desert inn. With a handful of suspects, Sima has to use all her detective abilities as well as her not too shabby martial arts skills to bring the murderer to justice.

This marks the first film from director Si Shubin, and whilst it is not going to set the movie world ablaze, less discerning viewers will still be able to gain enjoyment from the proceedings as the film does get certain elements right. To his credit, Shubin manages to work around the films low budget most of the time, with the film having decent performances and enough martial arts scenes to keep action fans happy.

Costumes and set design are also well done for a low budget film. The Inn that the majority of the film takes place in is especially well realized and even though the photography is clearly digital, it looks professional for the most part.

The one major drawback in regards to the look of the film is the previously mentioned CGI that is used. Whilst forgivable in certain scenes, there is one particular sequence that involves our lead characters riding on horseback. The scene in question features some of the poorest CGI I have seen in some time and instantly takes you out of the film. Surprisingly this effect is used twice in the film.

Shang Rong, applies herself well in the lead role, playing it like a Kung Fu fighting Miss Marple, albeit much younger and attractive. She does fare better in the dramatic scenes than the action, where it is obvious she has been stunt doubled. Luckily the choreography and direction manage to cover this up most of the time. Hopefully her work here will lead to more high profile film work.

The supporting cast made up with the likes of Zhang Pei-Yu, Qi Jing-Bin and Zhang Ren-bo gets the job done, but none of them are a real stand out.

The fight choreography by We Guoqing may not be on the scale of his more famous counterparts like Yuen Woo Ping or Ching Siu-Tung, but it is decent enough. There is a somewhat over reliance on wire work, but this is to be expected. My only issue with the fight scenes is that the majority of them are quite short.

In addition, there is one particular fight scene which has a group of Martial Artists competing in the Inn, which is let down by constantly cutting away and focusing on a conversation between Sima and her sidekick instead of the action that is taking place.

Bey Logan is listed as one of the producers and he is no stranger to Hong Kong cinema. He has worked on films such as Ballistic Kiss (1998) and Gen X Cops (1999). Although some of the films he has worked on have been better realized than others, his enthusiasm and knowledge of Hong Kong cinema cannot be faulted.

The poster for Lady Detective Shadow (2018) tries to cash in on the involvement of Logan with its claims of being from the producer of Crouching Tiger, Hidden Dragon: Sword of Destiny (2016). Although this claim is tenuous at best. Bey Logan did work on said feature but he is one of many producers listed on that film. This statement alone does Lady Detective Shadow a disservice as it raises expectations that the low budget actioner is unfortunately unable to meet.

If you are looking for a quick action fix that has enough martial arts fighting, and aren’t put off by a low budget you could probably do a lot worse than Lady Detective Shadow. There has already been talk of a sequel. If it improves on some of the drawback of this film and has a bigger budget, the sequel could end up being a real winner.