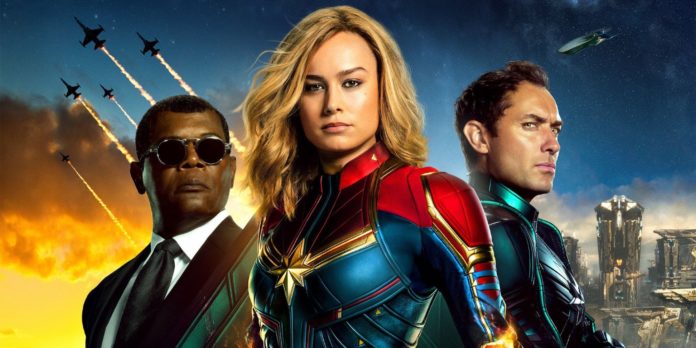 Kicking off with Iron Man (2006), the MCU (Marvel Cinematic Universe) has gone from strength to strength. Bringing together a full roster of its most famous comic book characters, the franchise has introduced cinema goers to the likes of Thor, Captain America, Black Widow and many more.

As well as being major money spinners for Marvel Studios, they have more recently become major awards contenders, with Black Panther (2018) being nominated for best picture at this year’s Oscars.  It would seem that comic book movies are finally being taken serious as a form of art.

For a number of years, fans have been requesting for better female representation in Marvel films. Even though the likes of The Avengers (2012) and Guardians of the Galaxy (2014) have featured female super heroes, they have never been the central focus.  The release of Captain Marvel (2019), finally rectifies this, with this being Marvel’s first fully fledged female led action movie.

The film opens with the introduction of Vers (Brie Larson), a soldier of the Kree, a race of alien beings currently at war with the Skrulls. We are told that the Skrulls have been overrunning planets and the Kree’s homeworld is next on their list. Vers unit, led by mentor Yon Rogg (Jude Law) are sent on a mission to rescue one of their spies, but this turns out to be a trap laid by Talos (Ben Mendelsohn). Vers manages to escape, but not before Talos is able to extract information from her mind.

After her escape, Vers finds herself on Earth circa 1995, where she teams up with a young Nick Fury (Samuel L Jackson). Together, they work to uncover Vers memories, which will end up testing her loyalties to the fullest.

With this being a major landmark for Marvel Studios, I feel bad to say that I was ultimately disappointed, with Captain Marvel proving to be one of their lesser releases in recent years. This is not to say that it is totally unsuccessful, as directors Anna Boden and Ryan Fleck get some elements right, mainly getting great performances from the impressive cast. This is not surprising as the majority of their previous output, with the likes of Half Nelson (2006), Sugar (2008) and Mississippi Grind (2015) have all been more character based.

The main issues with the film are not to do with characters. They are more to with the pace and the inclusion of some poorly conceived action scenes. For around the first 30 minutes, the film fails to generate much in the way of excitement, with poorly lit action scenes and too much exposition.

It is not until Vers finds herself in Earth that the film kicks into life, with the middle section of Vers teaming up with Fury being the most successful. With many references to 90’s pop culture, this is where Captain Marvel truly comes to life. There is additionally a good use of many popular 90’s songs on the soundtrack during this section.

With the film focusing on an alien invasion, the majority of the action feels relatively small. Even when the action goes into space, it still feels somewhat scaled down, although the CGI on display cannot be faulted. Most disappointing in terms of action is that instead of having the actors take part in a well-choreographed fight scene, a lot of the time they just have Larson shoot light blast from her fists.

The one standout fight scene takes place on a train, where Vers takes on a Skrull who has shape shifted into an old woman. It is great fun seeing an old woman throwing kicks and doing backflips. Unfortunately the scene is far too short, something that could be levelled at most of the action in Captain Marvel.

As well as directing, Boden and Fleck wrote the screenplay alongside Geneva Robertson-Dworet. For the most part the script is decent, but in some instances it seems that they are more interested in getting a message across instead of having the dialogue feel natural.

In performance terms, Brie Larson does well in the main role of Vers/Carol Danvers. This is the actresses most high profile role to date and she clearly put the work in, training for months in various martial arts as well as meeting with various servicemen in order to prepare for the part. Sadly, considering the characters rich back story in the comics, Captain Marvel turns out to be one of the least interesting Marvel characters to have their own franchise. This is through no fault of Larson, who valiantly injects more life and humour into the character than is on the page.

Thankfully the supporting characters are injected with more life than the slightly bland Captain Marvel. Through the use of subtle de-aging effects, series stalwart Samuel L Jackson has great fun as a much younger iteration of Nick Fury. The filmmakers do take some liberties with his character which I would not get into so as not to spoil the story, but this is not exactly the bad ass Nick Fury we have come to know. His fellow Shield Agent Clark Gregg also goes through the de-aging process, showing up as a young Agent Coulson, although his screen time is relatively brief.

Likewise, Jude Law as Yonn-Rogg has limited screen time, but does what he can in the role. Rogg clearly cares for Vers, but still does not tell her the whole truth. It will be interesting to see if his character returns in future Marvel movies. Adding a bit of class to the proceeding is Annette Bening, an actress not exactly known for her action blockbusters. Like Law, she has limited screen time, but her character is integral to the plot.

Best of all the supporting cast is Ben Mendelsohn as Talos. Getting to use his Australian accent for a change, Mendelsohn adds a lot of quirky character traits to what could otherwise have been a typical villain role. As the film progresses, his motives become more understandable, with him not being the clear cut villain as initially thought. Mendelsohn had previously worked with directors Boden and Fleck on Mississippi Grind, which comes highly recommended.

It is fun to see the likes of Djimon Honsou and Lee Pace show up, playing their Gardens of the Galaxy characters, tying the film up even further with the Marvel Universe. A special mention should also go out to Goose the cat, who plays a more important part to proceedings than initially expected.

I am sure many fans will disagree with my opinion, which is understandable, as I seem to lean towards the less popular films in the MCU. Fans of the MCU will no doubt still flock to see Captain Marvel no matter what, as it is still a major component of the franchise, with it leading on to the upcoming Avengers: Endgame (2019).

Furthermore it marks an important change for Marvel Studios, with this being the first of many proposed female led movies to come from the studio, with a Black Widow film currently being in development.