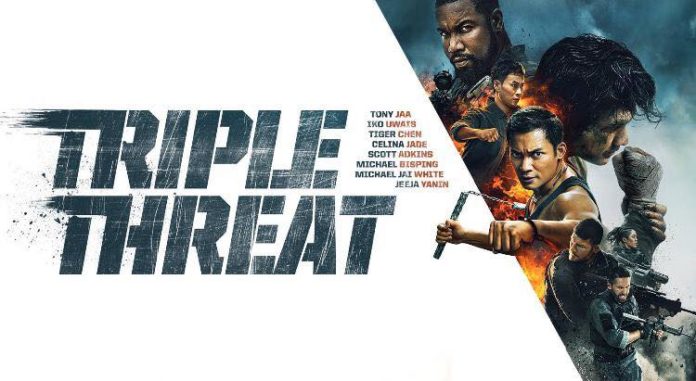 Considering the trailer was released back in 2017, it has taken quite a while for Triple Threat (2019) to secure a release. In the interim, director Jesse V. Johnson has found time to helm both Accident Man (2018) and The Debt Collector (2018), both of which were released before Triple Threat saw the light of day.

Thankfully, the good people at Well Go USA have finally been able to secure a release date for the anticipated actioner, and I am happy to report that the wait has definitely been worth it.

The plot here is not really important, as it does its job of moving the film along to its next action set piece. It is basic action movie stuff with a team of highly trained assassins being hired to kill the daughter of a billionaire. Luckily three mercenaries who have their own personal grudges against the assassins are standing in their way and will do whatever it takes to stop them from carrying out their mission.

Jesse V. Johnson has become well established in the action genre, with him being both a stuntman and a stunt co-ordinator, working on large scale action movies like Thor (2011) and The Amazing Spiderman (2012). In amongst his stunt career, he has paved out quite the career as a director, with each film he creates being better than the last.

Some of the best examples of Johnson’s work are Charlie Valentine (2009), The Beautiful Ones (2017) and the previously mentioned Accident Man. Triple Threat can now be added to this list, as it is one of Johnson’s most accomplished and ambitious film yet, featuring some of his biggest and best action scenes to date.

Johnson does not skimp on the violence, with there being no shortage of blood and gore. The violence shown harkens back to the glory days of 1980’s cinema, with Johnson mostly favouring practical effects over CGI. One of the most eye popping scenes has a character being decimated by a grenade launcher.

Thanks to casting director Mike Leeder, Johnson has been able to assemble a cast made up of some of the finest martial arts actors in the business. The Triple Threat of the title, made up of Tony Jaa, Iko Uwais and Tiger Chen all get a chance to shine throughout, taking part in various bone crunching fight scenes and bloody shootouts.

However, it is the supporting cast that make the most lasting impression, which is not surprising when you have Scott Adkins, Michael Jai White and Michael Bisping on villain duties. In addition there are the likes of JeeJa Yanin, Celina Jade, Dominiquie Vandenberg, Ron Smoorenberg and Hong Kong movie legend Michael Wong rounding out the cast. Legend may be over stating things, but I always get a kick out of Wong’s appearances in films.

In terms of the leads, Tony Jaa is certainly better served here than he has been in his previous Western produced movies. As the film progresses, the audience are given more information on the background of Jaa’s character that shows he is not the clear cut hero we initially thought. Although his work here is not on the scale of his smash hit Ong Bak (2003), Jaa proves he’s still got the moves. His English has also greatly improved throughout the years since Ong Bak.

Iko Uwais should be on the radar of any martial arts fans, with him starring in action classics The Raid (2011) and its sequel. Similarly to Johnson, Uwais has went on to work on two further Western made action movies, both of which were released before Triple Threat.

Beyond Skyline (2017) and Mile 22 (2018) turned out be disappointments, but Triple Threat rectifies this, giving the talented martial artist a chance to showcase his capabilities to a Western audience. His character is probably the most interesting of the three leads, with his loyalties not always clear to the audience. Like Jaa, Uwais’ English has also greatly improved.

Tiger Chen may not be as well-known as his two main co-stars, but he still manages to make an impression. Chen is probably best known for his starring role in Keanu Reeves’ Man of Tai Chi (2013), which also featured Iko Uwais in a small role.

Chen has not had the same level of exposure as his more famous co-stars, with the likes of the inferior Kung Fu Traveller (2017) not being widely seen outside of China and mostly squandering his talents.

Triple Threat is Chen’s best since Man of Tai Chi, and whilst his character may be the least interesting of the three leads, the action scenes he takes part in make up for this, especially his fight scene with Michael Bisping.

With regards to the villains of the piece, Scott Adkins is the real standout, not only getting to show off his martial arts skills but getting some of the film’s best lines. Adkins and Jesse V. Johnson have built up a terrific working relationship; with Adkins becoming one of his most regular collaborators. Discounting his brief appearance in Pit Fighter (2005), Adkins is always the lead in his collaborations with Johnson. Although he still has his fair share of screen time, he is no longer the sole focus.

However, Adkins still takes part in some of the film’s most impressive action scenes and his fans will not be disappointed, even if he is playing the bad guy. Not surprisingly, there are further collaborations to come from Johnson and Adkins, with the upcoming Avengement (2019) and a planned television series in the works.

Also on bad guy duties is Adkin’s Undisputed 2 (2006) co-star Michael Jai White, who has great fun in his role. Like Adkins he has some great one liners, and whilst he does not take part in as much of the action as expected, when the time comes he does not fail to impress. Action wise his most notable scenes have him going toe to toe with both Iko Uwais and Tiger Chen.

Jeeja Yanin, Dominiquie Vandenberg and Ron Smoorenberg round out Adkins team of assassins. Surprisingly Yanin does not get much of a chance to show off her considerable martial arts skills, with the majority of the action she takes part in being of the gun play variety. Both Vandenberg and Smoorenberg do get brief fight scenes, but their screen time is limited.

Celina Jade has the most thankless role in the cast, with her essentially playing the damsel in distress. She does what she can in the part, but she has had better roles.

Michael Wong’s role does not really add much to the proceedings, but as mentioned before, it is always good to see him.

Other than Jesse V. Johnson’s first class direction, the other main reason the action is so memorable is the fight choreography from Tim Man.  He had already worked as a stuntman with Tony Jaa on Ong Bak 2 (2008) and with JeeJa Yanin on Raging Phoenix (2009). As well as this, he has worked as a fight choreographer with Scott Adkins on a number of occasions, most memorably on Ninja: Shadow of a Tear (2013), where he also had a co-starring role.

His work here is on par with anything else coming out of Hollywood, with all the fight scenes being of the highest quality and tailored to the skills of the actors. He is fast becoming one of the best fight choreographers currently working today.

To any fans of martial arts or action cinema, Triple Threat will go down as one of the movie events of the year. It is just a shame that it will mostly be seen in people’s homes, as an action movie of this calibre really deserves to be seen on cinema screens.