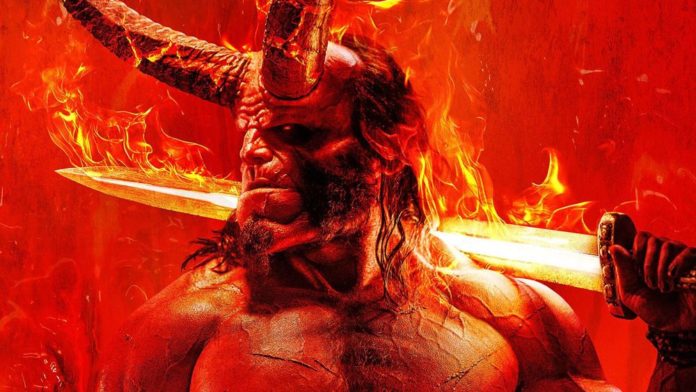 It has been over ten years since the release of the last Hellboy film. Although not as financially successful as its more famous comic book counterparts, Guillermo Del Toro’s Hellboy and the Golden Army (2008) proved to be a critical success, with a third entry being a foregone conclusion.

Sadly this proved not to be the case, with a number of behind the scenes complications leading to Del Toro scrapping his plans for the final part in his proposed trilogy. With his departure, it was not long before it was announced that Hellboy himself, Ron Perlman, would also be leaving the franchise.

As expected, this led to a great deal of fan disappointment, which only increased with plans that the franchise would be rebooted. The disappointment was slightly dissipated with the announcement that genre favourite Neil Marshall would be the director to replace Del Toro. Whilst perhaps not in the same league as Del Toro, Marshall had proven to be quite adept at both horror and action, with cult hits Dog Soldiers (2002) and The Descent (2005) being prime examples of his talent.

Expectations were further raised when it was announced that this iteration of Hellboy would be given an R rating, and be more in line with the tone of the comics. Even though Perlman wouldn’t be returning, replacement Hellboy David Harbour looked to be a suitable replacement. Well at least one of these statements turned out to be true.

Other than Harbour being a fine replacement for Perlman, Hellboy turns out to be a pale imitation of Del Toro’s earlier classics, filled with poor dialogue, lacklustre performances and an overuse of terrible CGI.

Considering this is a reboot, the plot is pretty much the usual save the world from destruction scenario. This time round, Hellboy has to stop the resurrected Nimue (Milla Jovovich), who is looking to unleash a plague of demons on mankind. Assisting Hellboy in his quest is his adoptive father Trevor Bruttenholm (Ian McShane), Alice Monaghan (Sasha Lane) and  B.P.R.D. Agent Ben Daimio (Daniel Dae Kim), who has a few tricks of his own.

Whereas the first two Hellboy films had Del Toro’s stamp all over them, this take on the character feels like a desperate attempt by a studio to launch a new franchise without taking into consideration what made the original films so successful. Millenium may have wanted this new version to be a success, but it is clear they were not willing to spend the money to make it so, with this reboot being made on a significantly lower budget than the previous outings

Going by a number of recent online sources, the faults of the film should not all be laid at the feet of Marshall. It is clear that this is not the film that he had originally envisaged, with stories of producers changing the script, forcing him to get rid of his regular director of photography and undermining him on set being some of the issues Marshall apparently had to deal with.

With these obstacles, it is understandable that Marshall’s film eventually turned out to be unsuccessful. However, Marshall does still get some elements right. The film has interesting visuals which set it apart from Del Toro’s work. Although the CGI is of a lower quality than hoped for, the practical effects are great, with a number of imaginative creatures included. It would have been easy for Marshall to try and emulate the look of Del Tor’s work, so he should be commended that he did not go down this route.

Although the action is not on the scale of the previous Hellboy movies, it is reasonably well done and suitably R rated. There is enough blood and violence to keep gore hounds happy, but the poor lighting and the shoddy CGI does detract from the overall effect.

In addition, Marshall does manage to get a good number of references from the comic books included, which should keep fans happy, even if it does slow down the action at certain points.

Initially, Hellboy creator Mike Mignola worked with screenwriter Andrew Crosby on developing a script for the third part of Del Toro’s trilogy. After Marshall was hired as director, the decision was made to reboot the series.

Christopher Crosby is now the sole credited screenwriter, with him taking inspiration from popular story arcs The Wild Hunt, Darkness Calls, Hellboy in Mexico and The Storm and the Fury. The script is one of the main problems with the film, being heavy on exposition and feeling stitched together from various comic book strands, which lead to the film feeling extremely episodic.

Also, a great deal of the supposedly funny one liners fall flat. The script issues are especially surprising considering Crosby’s own background in comics, most famously co-founding BOOM studios. In addition he co-created the entertaining television show Eureka (2006).

As mentioned previously, Harbour is great in the lead role. Slightly rougher round the edges than Perlman’s take on the character, Harbour gets the hard drinking heroic aspects of the character just right, and whilst he does not make you forget about Perlman, he does enough to make this version of Hellboy his own.

Unfortunately none of the supporting cast matches Harbour’s performance, although they do their best with the material given. Ian McShane is decent, but is clearly on autopilot. The same is true with Milla Jovovich’s generic villain Nimue, who is given next to no character development and less screen time than expected.

Daniel Dae Kim has always been a likeable presence, with his roles in the likes of Lost (2004) and Hawaii Five 0 (2010) being clear evidence of this. Although not terrible in the role, his English accent as Ben Daimio is quite poor. As a matter of fact, Hellboy features some of the poorest English accents I have heard in some time. Some of these could give Dick Van Dyke a run for his money. What is strange is that even British actors speak with these strange accents.

It is not all Dae Kim’s fault, as he was not given much time to prepare for the role, with him being a last minute replacement for the departing Ed Skrein. Controversially, Skrein was originally cast in the role of Daimio, who is Japanese in the comics. Fans were expectedly upset at this whitewashing of the character, with many complaints being levied at the filmmakers. Due to this, Skrein decided to stand aside so that someone more suitable could be cast.

Thomas Haden Church has fun as fan favourite Lobster Johnson, even if his time is relatively brief. Also, the ever reliable Stephen Graham is memorable as the voice of Gruagach.

I do not take any pleasure in stating that this take on Hellboy is ultimately a failure, as I am both a fan of the comics as well as Neil Marshall. Unassuming film goers may get more enjoyment with it as they go in with lowered expectations. Here’s hoping the next reboot of the character is more successful.