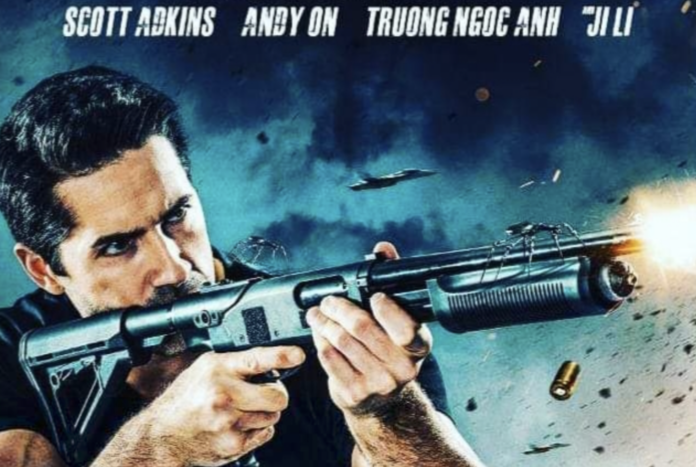 Scott Adkins, the hardest working man in action cinema, returns once again with Abduction, an enjoyably silly sci-fi actioner from director Ernie Barbarash and executive producer Roger Corman. Clearly not in the same league as some of Adkins recent work, there is still enough fun here to make Abduction a worthwhile experience.

Incorporating martial arts, gunplay, aliens, time travel, multiple dimensions and some of the poorest CGI this side of the 21stcentury, Abduction is pretty much the perfect example of a Roger Corman production, big on imagination, low on finances.

The film opens with Quinn (Scott Adkins) waking up in a rundown factory with a host of other unconscious prisoners. Witness to some form of experiment where the prisoners are being implanted with a device on the backs of their neck, Quinn awakes before the procedure can be carried out on him.

Walking through the factory, he comes into contact with his daughter, who it appears is also being kept prisoner. After a well-choreographed fight scene, Quinn is thrown out of a window, falling into a river below. When he reappears, he steps out of a fountain in Vietnam, with no recollection of his past or how he got there. He additionally has a major stutter, which makes it harder for him to communicate with people.

Coinciding with Quinn’s story is that of assassin Conner (Andy On). Conner has decided to turn his back on his life of crime in order to spend the rest of his life with wife Maya (Lily Ji). Unfortunately, his employers have different plans. After his wife is kidnapped, Conner starts working his way through the criminal underworld to find her, but it is not just gangsters he will have to deal with this time.

Bringing Quinn and Conner together on their quest to find out the truth is Doctor Anna (Truong Ngoc Anh). At first she can not believe the story of Quinn, who it turns out is not even from our time. He tells her a story of Aliens and parallel worlds that is hard to believe, until she is witness to this first hand. Now the three must fight the threat alone to bring back their loved ones.

Director Ernie Barbarash is no stranger to action. He has directed some of the better Jean Claude Van Damme films of late, one of which, Assassination Games (2011) found him working with Scott Adkins for the first time. All of his work is either been in the DTV or television market, so he is used to working with a low budget.

In most cases, Barbarash has been able to work around this. The likes of Pound of Flesh (2015) had some poor CGI work, but not enough to detract from the overall quality of the film.

The same can not be said about Abduction, with the low budget being consistently evident, featuring some of the poorest special effects this side of the SyFy channel. It is a shame that not more time and effort was spent on this aspect of the production, as it detracts from the overall production. This is not a slight on Barbarash, as this area of the production was no doubt out of his control.

I really should not be surprised that the budget did not extend to quality special effects, with thrifty producer Roger Corman on board.

Luckily the Vietnam locations rise the production up from other DTV actioners, adding some production value and Barbarash has a game cast that all do their best with the material. Like his previous films with Van Damme, Barbarash handles the on screen action with considerable skill, with only the use of CGI blood and gun fire detracting from the overall quality. Thankfully the majority of the action focuses on hand to hand fighting rather than gunplay.

The filmmakers made the wise decision of bringing in fight choreographer Tim Man to handle the action. His action alone is enough to raise Abduction above similar DTV actioners, with him creating a number of exciting fight scenes. He has worked with Scott Adkins a number of times now, most recently on Accident Man (2018) and Triple Threat (2019) and whilst his work on Abduction does not reach those lofty heights, it is still of a genuinely high quality.

Speaking of Adkins, he gets to stretch himself a little here. After Quinn re-appears in Vietnam, he is afflicted with a major stutter and an assortmernt of twitches. It sets Quinn apart from Adkins usual action heroes. Of course, these elements are quickly dropped when Adkins has to switch to action mode, but it does make for a more interesting character than expected.

Although he is top billed, Abduction is as much Andy On’s film as it is Adkins. On actually gets more screen time than Adkins, with a lot of the focus being on his characters search for his wife. In addition, he is no slouch in the action department, being the focus of a number of the films action scenes. The best of these has On figthing his way through an apartment complex, and his one on one fight with Adkins which is the highlight of the movie. The fight gives both actors a chance to showcase their martial arts skills.

Abduction marks the first time Adkins and On have worked together since Black Mask 2: City of Masks (2002). At that time, Adkins only featured in a relatively small role, with On being the star.

Other than our two leads, Truong Ngoc Anh does well in a slightly underwritten role and becomes more importnat to the plot as the film progresses. She is certainly better served than the other female in the cast, with Lily Ji being given the thankless role of the damsel in distress.

The rest of the cast only feature in small roles. Paul W. He manages to stand out as Sonny, a duplicitous gangster who sets Conner up. It is also fun to see the likes Andrew Ng and the prolific Aki Aleong show up in supporting parts.

Also keep an eye out for co-producer and casting director Mike Leeder who shows as the creepy looking cleaner. Apparently Leeder suffered for his art, with him going on to break his sternum during production. Ouch.

While not grade “A” Adkins, fans should still get enough enjoyment from the action on display and should keep them going until his next action classic, which going by the rate he works won’t be long.