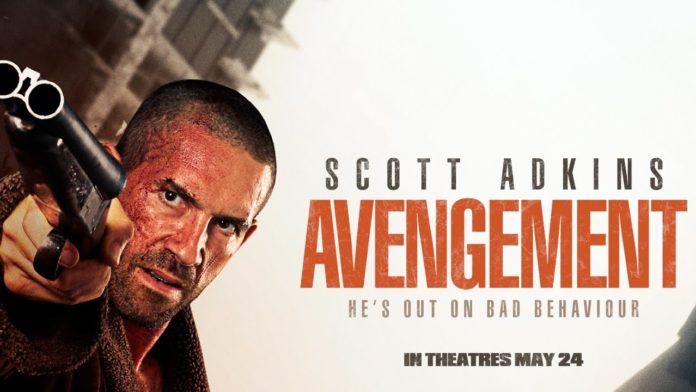 They have done it again. After working together on recent action classics Savage Dog (2017), Accident Man (2018), The Debt Collector (2018) and Triple Threat (2019), Jesse V. Johnson and Scott Adkins continue their winning streak with Avengement.

Running at just under 90 minutes, Avengement is a lean mean thriller, and while smaller scale than previous Adkins/Johnson collaborations, it does not skimp on the bone crunching action.

Told in a slightly non-linear fashion, we are first introduced to Cain Burgess (Scott Adkins) when he is let out on day release from prison to visit his ailing mother. Cain uses this opportunity to escape from his guards, before going on to unleash a bloody trail of vengeance against those who turned him into a cold blooded killing machine.

When a simple job goes wrong, resulting in the death of an innocent woman, Cain finds himself faced with the prospect of a long term prison sentence. The police will be lenient with him if he informs on his gangster brother Lincoln (Craig Fairbrass), but Cain is unwilling to turn on his own family.

Cain’s time in prison turns him from a wide eyed youth into a stone cold killer, with countless attempts on his life. With a face covered in scars and a mouthful of metal that would make Jaws from The James Bond franchise proud, Cain finally finds out that it is his own brother Lincoln (Craig Fairbrass) that is the cause of his predicament.

Of course Cain takes this somewhat personal, making it his mission to get revenge on his brother, and those who helped him get sent to prison.

Unlike Triple Threat, where it was made up of a fully international cast, Avengement is very British, with only one non Brit actor in the entire cast. A great deal of Avengement takes place in the one location, that off Lincoln’s pub. It is here where Cain tells his story, as well as unleashing some shocking violence.

As expected, Johnson does terrific work directing the on screen action. Clearly made on a smaller budget than Triple Threat, Johnson manages to stretch his budget to include multiple terrific fight scenes as well as filling the screen with great performances.

As shown previously, Johnson does not baulk at showing extreme violence. As expected, the fight scenes are expertly choreographed, but feel less refined than previous Johnson and Adkin films. This is perfectly in line with the story being told, with the fights being more brutal in nature, with a great deal of gouging, biting and stabbing included with the kicks and punches.

The fight scenes are expertly choreographed by Dan Styles, who had previously worked with Johnson and Adkins on Accident Man. He has worked on some other Adkins films throughout his career, on the likes of Green Street 3: Never Back Down (2013) and Eliminators (2016), both in front of and behind the camera.

Assisting Stiles with the fight choreography is Luke LaFontaine, a Jesse V. Johnson regular, dating back to the likes of Pit Fighter (2005), which co-incidentally featured Adkins in an early role. Since then, he worked on such Jesse V. Johnson films as Charlie Valentine (2007) and The Beautiful Ones (2017), so this should give an idea of the quality of Avengement’s action. Stiles and LaFontaine also appear in front of the camera, showing up in minor roles.

Outside of his popular Boyka character, Cain Burgess is probably one of the most memorable characters Adkins has played to date. Similarly to Boyka, Cain is a man whose experiences in prison have drastically changed him. As the film progresses we begin to find out that there is more to Cain than just simply getting revenge.

As well as giving him ample enough screen time to showcase his martial arts skills, Adkins gets to go through a gamut of emotions with some terrific dialogue peppered throughout. His scenes alongside Nick Moran are especially memorable.

Speaking of Moran, this is probably the best I have seen him since way back to his Lock Stock in Two Smoking Barrels (1998) days. He had previously appeared in Johnson’s Accident Man, but is much better utilised this time around, with a good share of screen time.

In regards to screen time, it is surprising how little Craig Fairbrass appears considering his second billed status. Still, even in a handful of scenes, Fairbrass makes for an imposing villain and is far better served here than some of his more recent DTV efforts.

The rest of the cast, made up of the likes of Leo Gregory, Thomas Turgoose and Beau Fowler are all impressive in smaller roles. Kierston Wareing is also good value as mouthy barmaid Bez, one of the only female characters in the movie other than Jane Thorne as Cain and Lincoln’s Mum.

Martial arts fans should also keep their eyes peeled for the underrated Mark Strange. He only appears briefly but does get to go up against Adkins in a suitably brutal fight scene. Hopefully his appearance here will help him reach a wider audience. He will again share the screen with Adkins later in the year, with the two of them co-starring in the upcoming Ip Man 4 (2019).

The other standout in the cast is Louis Mandylor, who shows up as Australian Detective O Hara, seemingly the only decent cop in the film. Mandylor is always a welcome presence, managing to impress in only a handful of scenes.

This marks Mandylor’s second film with Johnson after Accident Man, with a further collaboration on the way. The highly anticipated Legion Maxx (2019) will find Mandylor share the screen with other Jesse V. Johnson regular, Dominique Vandenberg, which should result in some explosive action scenes.

Avengement is quite a simple story, but Jesse V. Johnson and Stu Small’s script make sure to keep proceedings interesting, with excellent dialogue, memorable characters and a few twists in the tale. It is in much the same vein as their work together on The Debt Collector, with a good deal of humour used throughout in what would otherwise be a grim tale.

Accompanying the action is Sean Murray’s terrific synth heavy score, with some Ennio Morricone thrown in for good measure. The main score is very reminiscent of Morricone’s famous Chi Mai. Like many involved with Avengement, Murray has worked on numerous Jesse V. Johnson films, going back to the Doorman (1999), and this is certainly some of Murray’s finest work yet.

Avengement is tailor made for not only Scott Adkins fans but action fans in general, with some excellent fight scenes, great performances and a well written script. Whilst it may not reach the lofty heights of Triple Threat, it should still go down as one of the better action movies of 2019.