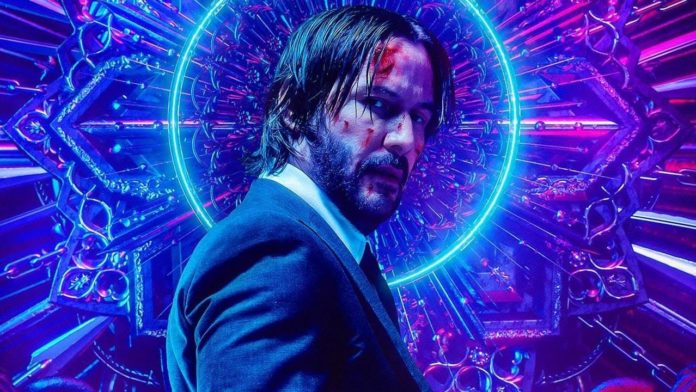 Keanu Reeves returns as the dog living hitman in John Wick: Chapter 3 – Parabellum. Upping the ante even further than the previous entry, Reeves and director Chad Stahelski have created what is one of the finest Hollywood action movie of the year, packed to the brim with spectacularly violent set pieces.

Carrying on only minutes after the finale of the second movie, John Wick (Keanu Reeves) is now on the run, being hunted down by numerous assassins sent from the High Table, the secret criminal society Wick once worked for.

Forced to cash in the last of his favours, Wick finds himself in Casablanca seeking the assistance of old associate Sofia (Halle Berry), who unwillingly helps Wick meet the mysterious head of the High Table.

This leads to some gloriously brutal action scenes incorporating martial arts, sword fights, gunplay and some crazy vehicular mayhem. The age rating of John Wick: Chapter 3 is pushed to the limit with countless shootings, stabbings and bones being broken.

Stahelski continuously comes up with inventive ways to kill people. One memorable scene has Wick break someone’s neck with a library book while another has him slowly push a knife through an assassin’s eye which is shown in full close up.

In regards to Stahelski, he proves once again that he is one of the finest action directors Hollywood currently has to offer. His background as a stunt performer and co-ordinator was the perfect breeding ground, clearly knowing what is needed to make an exciting action scene.

Whilst Stahelski does not stretch himself in terms of storytelling, his skill with the action is not in doubt, and when the action is this good, the shortcomings of the story do not matter as much. I have not seen a mainstream actioner with such good action scenes since the days of John Woo (Hard Boiled, Face/Off).

This is the longest entry yet in the series, running at 2 hours 10 minutes, but Stahelski never once lets the pace drag, moving swiftly from one set piece to the next. He does not only shine in terms of action, with him and director of photography Dan Laustsen creating some strikingly beautiful imagery with the rain soaked streets of New York City contrasting with the sandy hued colours of the Moroccan desert.

In the lead role, Reeves is as impressive as ever. The role of John Wick may not stretch his acting abilities but his dedication to the part is in no question, with him carrying out almost all of his own stunts and fight scenes.

Throwing himself straight into the action, one his most memorable scenes has him take on a group of assassins in an antique weapons shop, where he uses them as human pin cushions throwing countless knives into them. Eagle eyed viewers will spot his Man of Tai Chi (2013) co-star Tiger Chen as one of the assassins, who briefly goes one on one with Reeves.

Another is clearly inspired by Byung-gil Jung’s The Villainess (2017), featuring Reeves in a motor bike chase, which quickly descends into a fight scene between him and countless assassins whilst still atop their motor bikes. It is an exhilarating scene that is only slightly let down by some noticeable CGI.

Reeves has consistently proven that he is one of Hollywood’s best action leads, with his work in the likes of Speed (1995), The Matrix (1999) and the other John Wick movies being clear evidence of this.

Reeves trained in jiu-jitsu and judo in preparation for his role with director Chad Stahelski taking full advantage of his skills, lensing the action in long takes, showing of the athletic abilities of his actor as well as the choreography of the 87Eleven Action Team.

Joining Reeves on his adventures is the always dependable Ian McShane and Lance Reddick, both carry overs from the previous two movies. Both of them get quite a bit more to do this time round with Reddick even getting involved in the action at one point.

Lawrence Fishburne also reprises his role of the Bowery King from part two. Like the previous film, Fishburne does not get a great deal to do, however he still plays an important part in the overall story and gets some great dialogue.

The main new addition to the cast is the terrific Halle Berry (Kingsman: The Golden Circle), who makes a great impression as Sofia, an old associate of Wick’s. Behind the scenes footage shows that Berry also undertook a great deal of fight and gun training to get ready for her role. Her action scenes alongside Reeves are suitably tense, with the added attraction of two crotch chewing Alsatians being thrown into the mix.

Surprisingly, her screen time is limited but perhaps may make further appearances in the franchise further down the line. There are also small roles for the legendary Anjelica Huston and Jerome Flynn. Both only appear in a handful of scenes but make the most of their parts, with Huston adding some gravitas to her role as The Director.

The most enjoyable member of the new cast is the wonderful Mark Dacascos as flamboyant sushi chef Zero. Although tasked with taking out Wick, he is genuinely a fan of the famed hitman, even stopping during a tense moment to tell him how impressed he is with him.

Dacascos has great fun as Zero, clearly relishing what is one of his best roles in years. The charismatic actor not only gets some terrific dialogue but gets a chance to cut loose with his own considerable martial arts skills.

Although some may recognise him as the Chairman from Iron Chef America (2004), he should be better known to martial arts movie fans for his work on action classics like Only the Strong (1993), Crying Freeman (1995) and Drive (1997). More recently he had a recurring role as the villain Wo-Fat in Hawaii Five-0 (2010).

It is about time that Dacascos featured in more mainstream productions. Hopefully his stellar work here will lead to more high profile roles.

Dacascos’ Zero is ably backed up by his students, two of which are played by The Raid series’ Cecep Arif Rahman and Yayan Ruhian. As expected, the two of them do not disappoint, getting to showcase their awesome martial arts skills, especially during the finale.

Like Zero, they too are fans of Wick, stopping mid fight to thank him for the opportunity to go up against him. Half of the fight has them use Reeves as a punch back, before he adapts to their fighting styles.

Only Asia Kate Dillon slightly disappoints as The Adjudicator, coming across more like a snobby accountant than a crime boss, although this is clearly intentional.

As mentioned previously, the John Wick movies are not known for their great stories. Essentially John Wick: Chapter 3 boils down to a long chase with Wick going from action scene to action scene. Surprisingly, it took four screen writers to come up with this. Series originator Derek Kolstad, along with co-writers Chris Collins, Shay Hatten and Marc Abrams all worked on the final script.

Simple and straight forward, there is a lot of interesting side characters that may not add a great deal to the plot but make for a much richer experience. Additionally they further expand the world of the High Table, showing even more of the inner workings of the organisation.

Although we are only in May, you will find it hard to find a finer piece of action entertainment this year, or even next year for that matter. Clearly leaving the door open for further entries, here’s hoping there is not too long a wait until the return of Mr Wick.