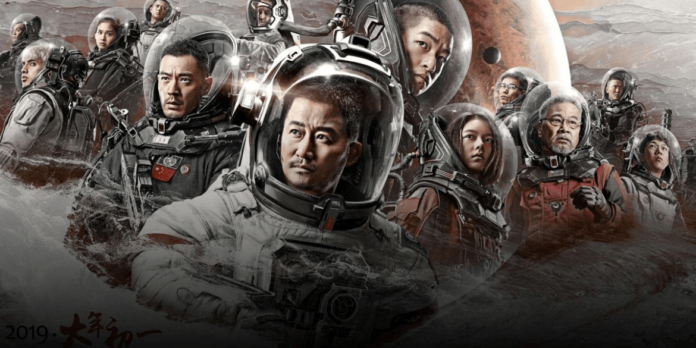 After saving Africa from terrorists in Wolf Warrior 2 (2017), Wu Jing ups the stakes in The Wandering Earth with the whole world now in need of rescuing. Fans of Jing may be disappointed by the total lack of martial arts, but there are still enough large scale action scenes to keep most unassuming viewers happy.

Although promoted on his name, Wu Jing is mainly a supporting player with the majority of his role keeping him apart from the rest of the cast. Only a brief scene during the opening has him share the screen with any of the main cast.

Loosely based on the novel by Liu Cixin, The Wandering Earth is set in the near future where the sun is quickly dying. The worlds governments come together to come to a solution to preserve humanity. Their plan is to surround the earth with propulsion engines that run on fusion power. These engines will move the earth out of our solar system and into the Alpha Centauri System, 4.5 light years away.

Chinese astronaut Liu Peiqiang (Wu Jing) is chosen to work on an orbiting space station and assist in the navigation of the earth to the new system. Due to the length of his mission, Peiqiang leaves his young son Liu Qi in the care of his father in law, Han Zi’ang (Ng Man-Tat). Before departing he promises Liu Qi that he will return.

Flash forward 17 years and most of the surface is now covered in ice due to the earth moving away from the sun. We are then introduced to the now adult Liu Qi (Qu Chuxiao) along with his adopted sister Han Duduo (Zhao Jinmai). Through a series of incidents the two of them, along with their grandfather Han Zi’ang find themselves working alongside military rescue team CN171-1, led by the tough Wang Lei (Li Guangjie).

As earth passes Jupiter, it gravitational pull causes catastrophic earthquakes, leading to many of the earth engines shutting down. It is now up to our heroes to try and get the engines restarted before earth is completely destroyed.

Meanwhile, Peiqiang has to deal with MOSS, a rogue A.I aboard the space station. MOSS has decided that saving the earth is a lost cause and tries to stop Peiqiang from trying to stop its destruction.

The Wandering Earth marks the third film from director Frant Gwo, and it is certainly his largest scale film to date. Lacking in character and guilty of falling into soap opera theatrics, Gwo manages to make up for this by keeping things moving at a fast pace, with one action scene after another. The ice covered landscapes make for great locations for the films exciting set pieces with a trip through the frozen city of Beijing being a clear highlight.

Visually, Gwo and director of photography Michael Liu have created a vibrantly colourful sci-fi adventure. Equal parts Armageddon (1998) and 2001(1968), The Wandering Earth is filled with excellent special effects, that whilst not on the scale of the large scale Hollywood Blockbusters that it clearly emulates, are still some of the best I have seen in a Chinese production.

Surprisingly, the script is the work of five writers, two of which are director Frant Gwo and producer Gong Geer. Considering the amount of people working on it, it is one of the poorer aspects of the film, made up of scenes and situations from similar, but better films.

Wu Jing does well with his limited role, getting to stretch his dramatic muscles for a change. As mentioned, fans may be disheartened that he does not display his martial arts skills, although he still gets his fair share of the films action.

One of the film’s most nail biting action set pieces takes place on the space station, where he and fellow astronaut Makarov (Arkady Sharogradsky) work together to shut down MOSS. It is highly reminiscent of Alfonso Cuarón’s Gravity (2013), with the two of them having to travel outside the station, with the risk of them drifting off into space at any time.

Other than these brief scenes with Sharogradsky, the remainder of Jing’s role have him acting against the Hal 3000 a-like MOSS. Apparently, Jing was only to appear in a cameo, but his role was extended as the production continued. He even went on to invest his own money into the film to ensure its completion.

The main lead role is actually Qu Chuxiao’s Liu Qi, who does well within the limits of the material. The character comes across as extremely annoying due to his anger issues. Considering the grand scale of events, you would think he would be able to set these issues aside, but yet time and time again he complains about his father, blaming his absence as being the cause of his mother’s death.

His role put me in mind of Jessica Chastain’s in Interstellar (2014), who even with the end of world being near, seemed pre-occupied in blaming her father for not being there for her, seemingly forgetting the reason for his absence.

Zhao Jinmai’s Han Duoduo comes across as even more annoying than Liu Qi. Her dialogue mainly consists of her screeching for help and crying a lot. She thankfully does get a chance to act more heroic towards the end of the film, but it’s too little too late.

Like his co-stars, Guangjie Li’s part is underwritten, but he manages to make an impression, getting a great deal more screen time than he did in his previous movie Savage (2018).

Adding a bit of class to proceedings is Hong Kong movie legend Ng Man-Tat. More famous in the West for his comedy partnership with Stephen Chow, he has shown countless time that he can be a fine dramatic actor with the likes of Moment of Romance (1990) and Portland Street Blues (1998) being clear highlights.

Sadly his screen time is limited, but he is always a welcome presence and clearly one of the films best actors.

One aspect of the script that works well is how everyone comes together to save the earth. Nationalistic pride does not get in the way, with all countries banding together to complete their mission.

The musical score by Roc Chen makes for a fine accompaniment to the on screen action, even if it is somewhat reminiscent of the works of Hans Zimmer.