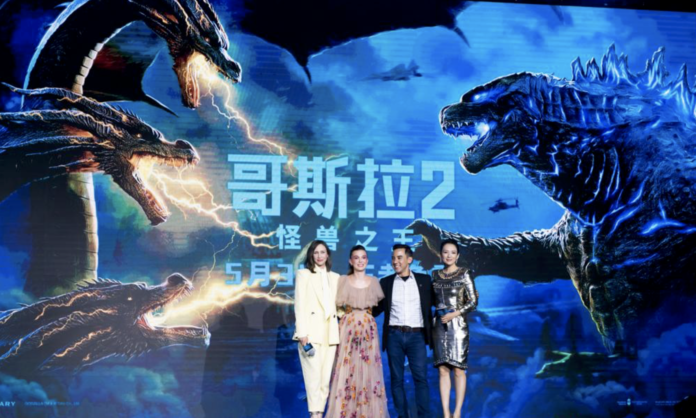 After the debacle that was Roland Emmerich’s Godzilla (1998), it took Hollywood over fifteen years before they would take another stab at the Big G. He finally returned to American soil in Gareth Edward’s Godzilla (2014), a major improvement on the previous disaster.

However, this new attempt at bringing the Japanese legend to the west was still met with complaints, with many bemoaning the lack of Kaiju action. Personally I loved the approach Edward’s took, slowly building to the reveal of Godzilla and the large scale destruction. I will agree that there was a lack of full on Kaiju battles, but it was still an exceptionally well made blockbuster.

Those unhappy by the previous lack of monster battles will have no such complaints with Godzilla: King of the Monsters (2019). Although initially thought to be returning to the director’s chair, Trick R Treat (2007) and Krampus (2015) helmer Michael Dougherty takes over directing duties from Edwards. He certainly does not disappoint, proving to be a fine replacement.

Taking place five years after the events of the first movie and the destruction of San Francisco, Monarch, the crypto-zoological organisation has come up with a way to possibly control the titans.

Paleobiologist Abby Wells (Vera Farmiga), who suffered a family tragedy during Godzilla’s last battle, has invented a device called the Orca. The device, which sends out a signal that only the Titans can hear, makes them become docile, so they can be manipulated.

Abby only briefly gets a chance to test the machine before she and her daughter Madison (Millie Bobby Brown) are kidnapped by eco-terrorist Alan Jonah (Charles Dance) who plans to unleash the monsters on the earth, with the misguided belief that this will somehow bring balance to the world.

Monarch end up going to Dr Mark Russell (Kyle Chandler), Abby’s estranged husband, so that he can assist in Abby and Madison’s rescue as well as retrieve the Orca. Things do not exactly go to plan, with the awakening of King Ghidorah and many other Titans putting the whole world in Jeopardy. Godzilla’s protection may not be enough to save humanity from total annihilation.

Although his previous films have all been suitably small scale affairs, Dougherty comfortably transitions into blockbuster filmmaking, showing a flair for large scale set pieces. The script which he co-wrote with Zach Shields and Max Borenstein tells a pretty straight forward and simple story, doing a good job at balancing between human drama and Kaiju action. While the characters in King of the Monsters may not be as well realised as in Dougherty’s other movies, they are still developed enough so that they do not simply feel like cyphers.

One of the main disappointments with the previous movie was the lack of recognisable monsters for Godzilla to face off against. Dougherty has rectified this with not only the inclusion of King Ghidorah but also fan favourites Rodan and Mothra. The monsters are beautifully realised with state of the art CGI, far removed from the men in suits that were synonymous with the original Japanese series.

Similarly to Guiilermo Del Toro’s Pacific Rim (2013), a good deal of the Kaiju battles take place at night. Unlike that film however, Dougherty makes sure that the choreography of the on screen action is easy to follow.

The two best set pieces are Godzilla and King Ghidorah’s first smack down, which takes place in and around one of Monarch’s outposts in Antartica. Fans of John Carpenters The Thing (1982) should raise a smile with it being named Outpost 31.

The set pieces that follow are also impressive, but the best is kept for the destruction filled finale. Accompanied by Akira Ikufukbe’s iconic theme music, fans will find it hard not to cheer during Godzilla and King Ghidorah’s final showdown.

Similarly to the first movie movie, which featured an all-star cast filled with the likes of Bryan Cranston, Elizabeth Olsen, Aaron Taylor Johnson and Ken Watanabe, King of the Monsters is likewise packed with quality acting talent.

Most of the cast are made up of new comers to the series, with only Watanabe, Sally Hawkins and David Strathairn returning from the first movie. Out of them, only Watanabe as the heroic Dr. Ishirō Serizawa gets much to do.

Kyle Chandler makes for a suitable everyman hero, with him being conflicted over his hate for the titans but also realising the need for Godzilla when the time comes. He certainly makes for a more interesting lead character than Johnson’s bland soldier in the previous movie.

Chandler is set to return as his character for Adam Wingard’s Godzilla vs Kong (2020). This will mark his second Kong movie, previously starring in Peter Jackson’s King Kong (2005).

Vera Farmiga also impresses in a more complex role than the promotional material suggested. To speak more of her role would perhaps ruin aspects of the plot. This is Farmiga’s second Sci-fi movie of the year with her featuring in Rupert Wyatt’s Captive State (2019).

Sci-fi and fantasy fans should know by now the name Mille Bobby Brown, with her playing popular character Eleven in cult favourite Stranger Things (2016). Whilst her role does not stretch her acting ability, she does get involved in quite a bit of the action with her character being vital to how things play out. Like Chandler, Brown will also reprise her role in Godzilla vs Kong.

The great Charles Dance is the closest the film has to a bad guy, but even he thinks he is doing the right thing. Dance can do villainy in his sleep and as expected, he does not disappoint.

The remainder of the supporting cast, including Zhang Ziyi, Bradley Whitford, Aisha Hinds, Thomas Middleditch and O’Shea Jackson Jr all do fine work in smaller roles.

Eagle eyed viewers should keep their eyes peeled for a small appearance from Joe Morton, playing the same role that Corey Hawkins played in Kong: Skull Island (2017). His character is just one of many Easter eggs peppered throughout the movie.

The musical score by Bear McCreary manages to get your pulse racing, and is a great accompaniment to the action on screen. Incorporating Akira Ifukube is a masterstroke, with its absence in the previous movie being truly felt.

Some reviewers have been overly critical about Godzilla: King of the Monsters, with them complaining that it is silly or absurd. I do not really know how realistic you could make a film about giant monsters. Clearly they are the wrong audience for this type of film. King of the Monsters gives fans of the series exactly what they want. People are not coming for great character development; they want to see massive Kaiju battles which this film has in abundance. Still there is enough human drama and emotion on display to keep most viewers happy.