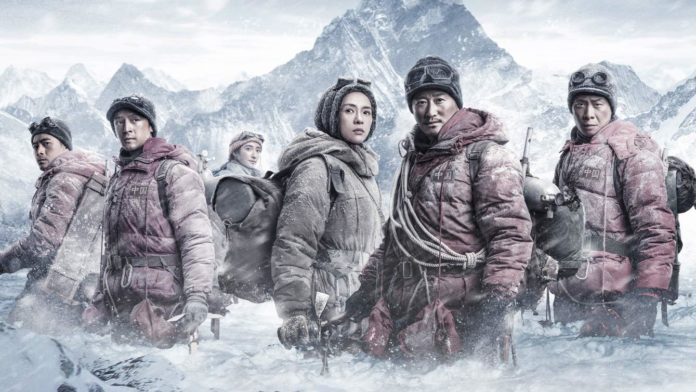 After the lacklustre Time Raiders (2016), Daniel Lee returns to the director’s chair with the solidly entertaining The Climbers. Putting aside the martial arts and fantasy elements prevalent in most of his recent filmography, Lee turns in his most enjoyable feature since 14 Blades (2010). Whilst perhaps not as successful as intended, The Climbers still proves to be an exhilarating blockbuster.

The film tells the based-on fact story of famed mountaineer Fang Wuzhou (Wu Jing), who led a successful climb of Mount Everest in 1960. Unfortunately, during the ascent, the climbers lost their camera and with it the chance of proving to the world that they actually made the climb with many in the climbing community not believing of their exploits.

To make things worse, on his return Wuzhou finds that his beloved Xu Ying (Zhang Ziyi) is leaving to study meteorology in the Soviet Union. From here the film fast forwards 15 years to 1975 with Wuzhou being handed a chance of redemption, with him being requested to oversee a new team of mountaineers who will once again attempt to reach the summit of Everest.

As well as reconnecting with his old team mates, the climb reunites him with Xu Ying. Like the climb in 1960, this will come at great personal cost with every one of his team being tested to their limits.

While Daniel Lee has certainly proven to have skill behind the camera, his filmography could be classified as hit or miss at best. A number of his films have memorable scenes but do not come together as a whole. This is clearly evident in the likes of Dragon Squad (2005), Three Kingdoms (2008) and more recently Dragon Blade (2015).

Similar to many sports dramas, Lee fills his film with various montages and training sequences. There is also a nice getting the gang back together sequence, with Wuzhou travelling and individually reassembling his team.

In the past Lee has been guilty of over directing his action scenes to the point of distraction. His action has a tendency to either be undercranked or full of quick random cuts that rob the viewer of enjoying the action choreography on display. Mercifully, Lee shows a good deal of restraint on The Climbers, with the action being well shot and easily discernible.

Working with action director Alan Ng, The Climbers’ action scenes are suitably epic although they do forgo realism for excitement. At times it felt as if I was watching Cliffhanger (1993) rather than the true-life tale the Climbers pertains to be. Still, it can not be denied that this approach works in the films favour, with the multiple near misses and rescues being the highlights of the film.

Typical of many Chinese blockbusters, there is the expected poor CGI, which can sometimes let down the action. Thankfully the poor CGI shots are kept to a minimum, with the majority of the special effects being well done.

Lee was also one of the screenwriters, along with A Lai. It is clear that they are not taking a wholly realistic approach to the material. Although based on fact, The Climbers is full of rousing speeches and flag waving patriotism that is only found in the movies. In addition, there is more of a focus on the romances between particular characters than was necessary.

The climb should be of interest enough, but there are a number of romantic subplots and interludes that pads out the run time. While it is nice getting to know the characters before the climb, they are more like genre types than actual people, although the performers do a good job of imbuing their thinly drawn characters with a good deal of life.

Wu Jing furthers stretches his acting muscles as Fang Wuzhou. Martial arts fans will no doubt be disappointed that Jing has once again opted for a primarily dramatic role, with none of his signature fighting skills being present. Still, Wuzhou is still every bit the Wu Jing action hero, both tough and determined.

Even with an absence of martial arts, the plot gives Jing plenty of opportunity to show off his agility, with him showing a skill for Parkour decades before its creation. Aside from the action, this is probably the best performance he has given to date.

Zhang Ziyi does not fare as well as Jing, with her character of meteorologist Ying Xu being one of her lesser roles. This is not to say that she is bad in the role as she is probably one of the best actors in the cast, just that her character does not always ring true. In addition, her romance with Wuzhou comes across as too chaste for the audience to be interested.

Much better is Zhang Yi as Songlin, Wuzhou’s angry team mate. Still bitter over their climb 15 years previous when Wuzhou chose to save him instead of the camera. Now he is all about the mission, with him risking the lives of his team so that they can reach the summit. It is only as the film progresses he begins to realise the human cost of his obsession.

To be honest, I can not remember a character being so angry because someone saved his life. He is constantly angry towards Wuzhou, sometimes struggling to even be in the same room. The development of their relationship is actually more interesting than the romantic one between Wuzhou and Ying Xu.

Supporting players like Boran Jing and Hu Ge also do fairly well, making more out of their roles than is on the written page. Promotional materials have made a big deal out of superstar Jackie Chan making an appearance. Those awaiting his arrival may be disappointed, as he only shows up during a mid-credits sequence, although any screen time from the film legend is welcome.

Ultimately The Climbers is an extremely well made blockbuster that should please most action fans. While it may not be the most realistic version of the story the film makers could have told, there is enough large-scale spectacle here to keep viewers entertained.