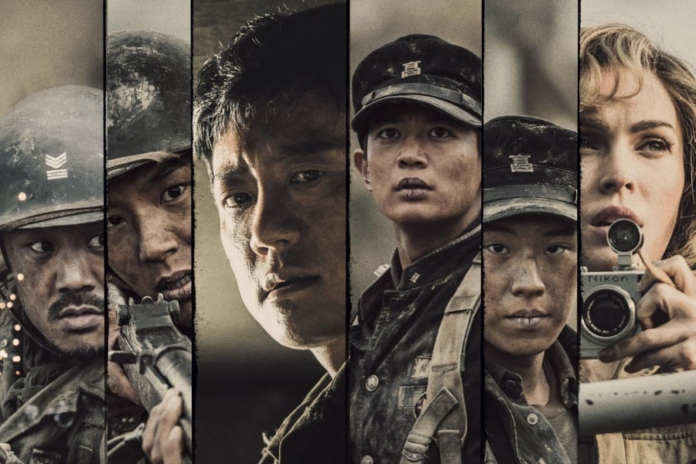 Korean cinema has a good track record when it comes to war epics. The likes of Kang Je-gyu’s Taegukgi (2004) and Jang Hoon’s The Front Line (2011) are perfect example of the genre, mixing large scale spectacle and heartfelt emotion.

While Battle Of Jangsari has some issues which stop it from living up to those classics, it is ultimately still a worthwhile and heartfelt war drama.

Coming from Warner Brothers Korea, Battle Of Jangsari is based on a true story which took place over two days in September 1950 at Jangsari, North Gyeongsang Province in South Korea. An army unit mostly consisting of student soldiers were to set up a diversionary invasion to distract the North Koreans from the real invasion, which was to take place in Incheon a day later.

The average age for these soldiers was around 17, with them only having around two weeks-worth of training. To say they were thrown in at the deep end would be putting it lightly. Led by Captain Lee Myung-Joon (Kim Myung-Min), they are instantly met with a trail of bullets as they come off their ship.

With heavy casualties they finally take occupation of the North Korean’s guard post on the beach. This of course is not the end of their troubles. Running low on supplies, and heavily outnumbered, they soon have to face the wrath of the oncoming North Korean forces.

Directors Kwak Kyung-Taek and Kim Tae-Hoon do a respectable job of keeping the action moving along. They go to great pains in showing the horrors of war; with many of our young cast being no more than cannon fodder.

As expected from veteran director Kwak Kyung-Taek, the action scenes are well realised. He has shown considerable skill in this area in the past with blockbuster Typhoon (2006) and Eye For An Eye (2008). The battle scenes at times appear chaotic, with it being unclear who is fighting who. This is clearly on purpose and shows how confusing a real battle could be.

Being the work of two directors, it is unclear who the accolades should go to. On occasion Kwak Kyung-Taek has co-directed, such as the afore mentioned Eye For An Eye where he took over from original director Ahn Gwon-Tae. It is unclear if something similar happened with this film or if he directed the feature side by side with Kim Tae-Hoon.

In regards to Tae-Hoon, he is nowhere near as prolific as Kyung-Taek, working mostly in television. However, he has shown considerable skills on the shows Athena: Goddess of War (2010) and Iris 2 (2013), so it is not unfathomable that a good deal of the quality is down to him.

Working from a script by Lee Man-Hee and producer Jung Tae-Won, the directors manage to make you care for the protagonists even though they can appear to be thinly drawn. The cast more fit into genre types than fully rounded characters, with their being the brave one, the cocky one, the fat one etc.

Still the relatively young cast are likeable enough to overcome the shortcomings in the script, with K Pop star Minho and Kim Sung-Cheol being clear standouts. Having already appeared in such films as Derailed (2016) and Illang: The Wolf Brigade (2018), this is personally his best performance to date.

Sung-Cheol’s Ki Ha-Ryun initially comes across as unlikeable but warms to the audience as the film progresses with us getting a brief explanation of his background.

Leading the team, Kim Myung-Min does well as the brave Captain Lee Myung-Joon, with the pressure of being responsible for these young people’s lives showing heavily on his face.

As good as the main cast are, they are let down slightly by the un-needed addition of American actors Megan Fox and George Eads. While they are not exactly terrible in their roles, they add next to nothing to the film, with them being surplus to requirements. It would seem that Fox filmed all her scenes at once, with her costume not changing from scene to scene.

Their inclusion is similar to that of Liam Neeson’s in Operation Chromite (2016), with them being added no doubt to bolster the film’s sales on the international market. It is no surprise that Battle Of Jangsari is from the same producers, with it reportedly being the second part in a trilogy of Korean War related films. The actual events that the film covers happened parallel to those in Operation Chromite.

It also shares two of the same writers as Operation Chromite. Lee Man-Hee and Jung Tae-Won also had previously worked on the similar 71: Into the Fire (2010) which was coincidentally from Operation Chromite director John H Lee. Like Battle Of Jangasari, that film too had thinly drawn characters but made up for it in its exciting action scenes.

Although their script will not win any awards, there are some nice touches throughout that illustrate the futility of war. One particularly memorable sequence has Minho coming into contact with his cousin who is fighting for the North. The scene makes it clear that no matter what side these soldiers were fighting on that they all had similar concerns and reasons for going to war with only a thin line dividing them.

In addition, it does seem to condemn the military commanders that sent these young men to an early grave.

Battle Of Jangsari will certainly not be remembered amongst classic war epics but it is still worth viewers’ attention with terrific production values, exciting battle scenes and some great performances.  It will be interesting to see what the final entry in the planned trilogy will be.