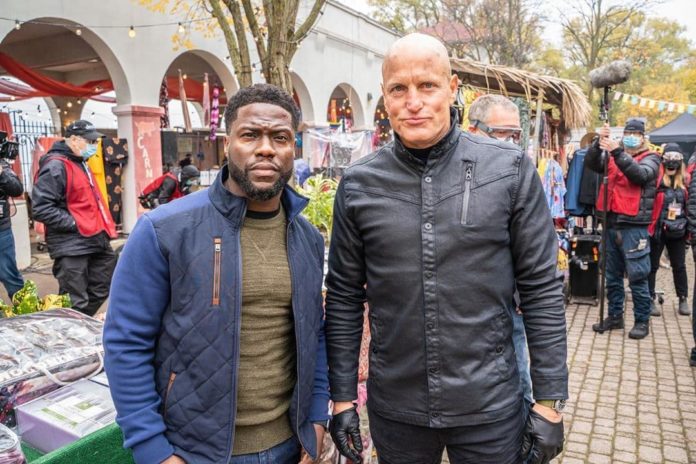 UPDATE: The Man From Toronto premieres on Netflix June 24th.

UPDATE: The Man From Toronto will be heading to Netflix instead of the previously planned theatrical release. The streaming service nabbed the worldwide rights deal in all territories, barring China.

Look out for the official release date soon.

UPDATE: Check out the on-set image from The Man From Toronto featuring Kevin Hart and Woody Harrelson.

UPDATE: Sony Pictures has found Jason Statham’s replacement in Woody Harrelson (Zombieland 2, Venom 2). Harrelson steps in just in time as production is set to roll in a few weeks. The film revolves around a case of mistaken identity after the world’s deadliest assassin (played by Harrelson), known as the “man from Toronto,” and a stranger, played by Hart, run into each other at an Airbnb. Chaos soon ensues as the assassin’s world comes crashing down on Hart.

UPDATE: Jason Statham has exited the project due to creative differences. It is reported that Statham wanted the film to be R-rated while the studio wants to stick with a more family friendly PG-13 rating for the Thanksgiving holiday season.

A search for a replacement is underway as production is set to start in 6 weeks.

Patrick Hughes (The Hitman’s Bodyguard, The Expendables 3) is attached to direct with a script by Robbie Fox (Playing For Keeps).

I couldn’t be more excited about my next movie…. @jasonstatham & I have been trying to figure out a movie to do together for years. I’m happy to say that we not only figured it out but we also knocked the idea out of the park. I can’t wait to start production man….This movie is going to deliver on so many levels…..Buckle up people!!!! #ManFromToronto #StathamAndHart

The duo previously worked together on last year’s box office hit Hobbs & Shaw in which Hart appeared in an extended cameo.