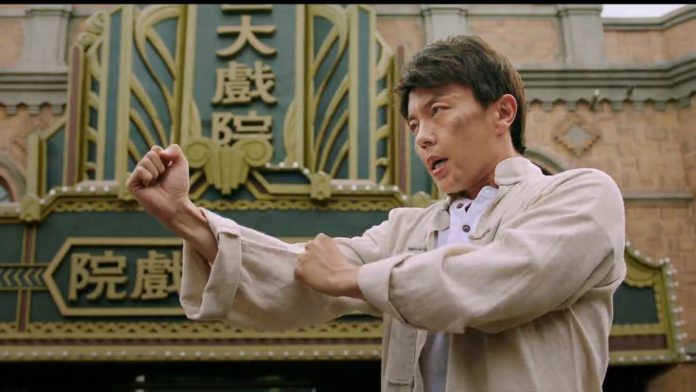 Another month and another Ip Man film is upon us. Directors Li Xi Jie and Zhang Zhu Lin’s Ip Man: The Awakening (2021) finds the young Ip Man (Miu Tse) visiting Hong Kong. No sooner has he arrived does he find himself involved in a fight against a group of Human Traffickers. Events escalate when his friend’s sister is kidnapped, with the kidnappers forcing him to compete in a fighting tournament.

Ever since the success of Wilson Yip and Donnie Yen’s series of Ip Man films there has been a deluge of copycat films, putting the real life hero in a variety of fantastical scenarios, more so than anything the real Ip Man would have had to face. Now this isn’t a judgement, as even Donnie Yen’s popular take on the character took some serious dramatic license. However his movies overcame this with terrific performances, impressive production design and above all else some of the best fight choreography money can buy.

Sadly, the majority of these other Ip Man features are unable to match the lofty heights of Yip and Yen’s classic series, although a small few have definitely come close with Herman Yau’s Ip Man: The Final Fight (2013) being a clear standout. Whilst it couldn’t match the bravura action scenes of Yip’s film it still had some extremely well choreographed martial arts sequences as well as featuring a wonderful performance from Hong Kong cinema legend Anthony Wong in the leading role.

The main problem with the majority of these productions is that they are pre-judged, as most viewers don’t want to give a non Donnie Yen Ip Man movie the time of day. A lot of their preconceived notions are correct but one just has to look at the aforementioned Ip Man: The Final Fight or to Wong Kar Wai’s wonderful The Grandmaster (2013) to see that you can still make a worthwhile Ip Man biopic.

Now, of course I didn’t go into Ip Man: The Awakening with the expectation that it would in any way match these two classics. Firstly, the sact running time of 76 minutes instantly told me I wasn’t in for an epic take on the martial arts hero. While it has some well done production design, The Awakening is clearly a low budget affair with one note characters and an overly simplistic plot that seems in a rush to get to the end.

However, if you are only looking for fight scenes The Awakening has more than its fair share, with directors Li Xi Jie and Zhang Zhu Lin use of some impressive camera moves raising the fights above similar DTV fare. The fight choreography is solid enough even if it doesn’t come anywhere close to the likes of Yuen Woo Ping or Yuen Kwai.

The majority of the fights are well staged other than the disappointing (anti) climax where Ip Man faces off against the film’s main villain. It is over far too quickly and pales in comparison against anything that has come before. My only other grip with the action is that it is overly edited. The editing sometimes is so quick that it doesn’t allow you to see the real skill of the cast.

In terms of the cast, Miu Tse makes for a decent if somewhat unimpressive Ip Man. This is more to do with who has come before rather than his actual acting ability. Clearly Tse is a talented martial artist but he lacks the gravitas that is required for this role, even if he is meant to be a younger incarnation of the legendary hero.

I must say though, from a Hong Kong cinema fan, I still got a kick out of seeing Tse on screen. Most Hong Kong cinema fans will probably know Tse better as a child actor with his most popular films being The New Legend of Shaolin (1994) and My Father is a Hero (1995) where he starred alongside martial arts superstar Jet Li.

Tse has done countless features in his adult years but nothing of the quality of his Hong Kong movies of the 90’s. At only 38 he still has enough time ahead of him to find a role more suited to his persona.

Of the main cast, Miu Tse gets the majority of the film’s screen time. Chen Guanying does well enough as his childhood friend who both helps and hinders Ip Man in his quest to defeat the human traffickers. I must admit that I wasn’t instantly aware of Chen’s work. Upon looking it would appear that the majority of his filmography is made up of streaming/DTV content. Even so, he does well enough in an otherwise underwritten role.

The villains this time round are the evil British, who rule Hong Kong with an Iron Fist. The Western actors were clearly picked for their physical attributes rather than any acting ability. Considering they are meant to be British, some effort could have been made to make them at least sound as if they were.

Sergio Deieso who portrays the film’s main villain doesn’t even attempt to cover his accent. It wasn’t until the halfway mark that I even realized that he was even meant to be British. Deieso is no stranger to Chinese cinema screens, with him also making appearances in Sammo Hung’s The Bodyguard (2016) and Jingle Ma’s Europe Raiders (2018).

Ip Man: The Awakening was recently released on the Hi-YAH! Streaming service, with it coming later to Digital, Blu-ray and DVD in June from the good people at Well Go USA Entertainment. Sadly this isn’t one of their best releases and unless you were a collector of everything Ip Man I would suggest catching it on streaming.