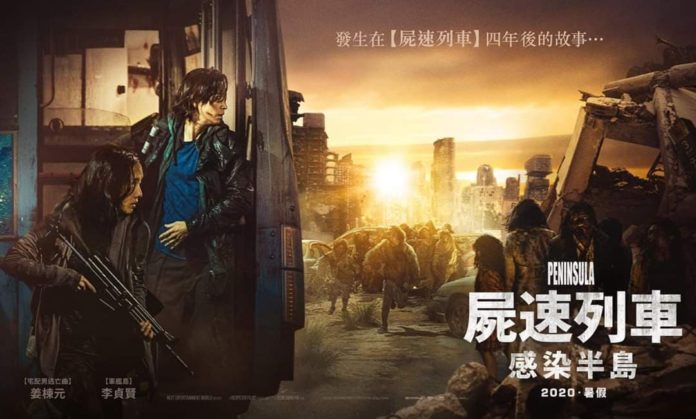 Director Yeon Sang-ho returns for the sequel to this 2016 zombie blockbuster Train To Busan called Peninsula. Speaking to ScreenDaily, the filmmaker stated:

“It takes place four years after Train To Busan, in the same universe, but it doesn’t continue the story and has different character. Government authority has been decimated after the zombie outbreak in Korea, and there is nothing left except the geographical traits of the location – which is why the film is called Peninsula.”

This time around, Yeon has double the budget to play with to expand the universe. “The scale of Peninsula can’t compare to Train To Busan, it makes it look like an independent film. Train To Busan was a high-concept film shot in narrow spaces whereas Peninsula has a much wider scope of movement,” says Yeon.

Peninsula stars Gang Dong-won (1987: When The Day Comes) as Jung-seok, a former soldier who manages to escape from the Korean peninsula – a zombie-infested wasteland turned into a ghetto by other nations trying to stop the spread of the virus. Sent back with a crew on a mission to retrieve something, he goes in through the port of Incheon to reach Seoul and comes under attack, discovering there are more non-infected survivors left on the peninsula.

Joining him to round out the cast is Lee Jung-hyun (The Battleship Island), Lee Re, Kwon Hae-hyo (The Fake), Kim Min-jae (Psychokinesis), Koo Kyo-hwan (Maggie) and Lee Ye Won.

As with Train To Busan, Well Go USA is set to distribute Peninsula in North America.