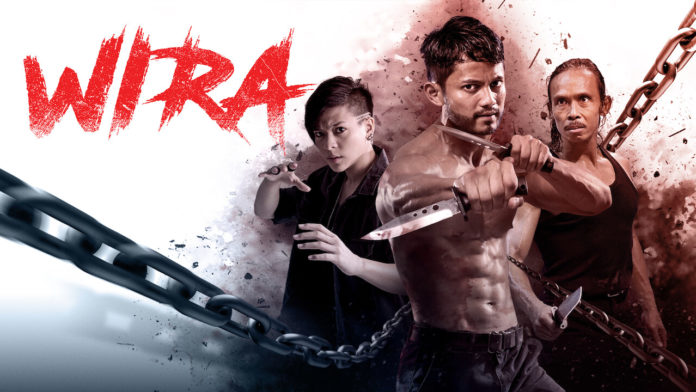 Director Adrian Teh follows up his smash hit Paskal (2018) with the smaller scale, but no less effective, Wira. A superbly paced martial arts tale, Wira reteams Teh with his Paskal leading man Hairul Azreen, here playing ex-commando Hassan who returns home to help out his sister and father after getting into trouble with local crime lord Raja (Dain Said).

In many regards Wira is a much better realized film than Paskal, with the most obvious improvement being the finely choreographed action scenes. This is no surprise considering the involvement of Indonesian martial arts sensation Yayan Ruhian (The Raid), here carrying out double duties as fight choreographer and co-star.

Teh kicks proceedings off with a brutal MMA fight between Hassan’s sister Zain (Fify Azmi) and Raja’s daughter Vee (Ismi Melinda). Although relatively short in comparison to the later action scenes it gives the audience a taste of what to expect as the film progresses.

From here Teh builds on the drama, with Hassan returning home and trying to reconcile with his headstrong father Munas (Dato Hilal Azman) as well as his sister. We find out that Hassan has a past connection with Raja and this is why he chose to join the army in order to escape his violent tendencies.

Of course, this being a martial arts film we know it won’t be long until he is going to have to fall back on his violent ways, with him and Zian eventually teaming up together to take on Raja and his army of goons.

Teh stages a handful of exhilarating fight scenes, each improving on the last. While the dramatic scenes aren’t anything we haven’t seen before. The hero not wanting to fall back on his violent ways can be dated back decades, most famously Bruce Lee in The Big Boss (1971).

The anticipation comes in knowing that it is only a matter of time before the lead explodes. Unlike The Big Boss, the wait isn’t that long in Wira, with us getting an early taste of Hassan’s capabilities when some of Raja’s underlings foolishly attempt to beat him.

Teh decides to shoot this scene in one long uncut take. The scene does come across as overly choreographed due to the nature of how it is shot, but it still impresses in what is a lower budget effort than its Hollywood counterparts.

In addition to the terrific action, Teh manages to get good performances from his cast. Sure there are no award winners here, but each of them are solid.

Hairul Azreen has certainly improved since his rather wooden performance in Paskal. At this point he is certainly not going to win any awards, but he seems to have become more natural in front of the camera. One area that he isn’t wooden in is his countless fighting scenes, with him getting ample chance to show off his considerable martial arts skills.

Almost stealing the film from Azreen is Fify Azmi as Zain. Amazingly this marks her big screen debut, with her taking over the role from another actress who was injured during training for the role. Azmi may have come late into the production but this isn’t evident in her performance, with her clearly putting the work in while preparing for the action scenes. At no point did I think that she wasn’t a capable fighter. Hopefully this leads to larger roles within the action genre.

On the villainous side, Dain Said seems to be having fun as the scummy Raja. It appears he went to the Michael Wong school of acting with him switching consistently between English and the local dialect which was slightly distracting. One thing that becomes quickly clear with Said is that he is no physical match with Azreen or Azmi.

Luckily for him he has some considerable backup. He has his son Rayyan (Josiah Hogan) and daughter Vee (Ismi Melinda) who are clearly as sadistic as him but can back it up with their own considerable fighting skills. Melinda does get more to do than Hogan, with her taking part in a fair amount of the action. Vee is the type of character you just can’t wait to see get their comeuppance.

As dangerous as they are, they both pale in comparison with Raja’s head of security, the deadly Ifrit (Yayan Ruhian). Any fan of martial arts movies should be aware of Ruhian, with his scene stealing roles in The Raid (2011) and its sequel being perfect examples of his skills.

As mentioned, Ruhian also carries out the fight choreography. While not as violent as his Indonesian classics, the fight scenes are all expertly staged with each better than the last. Standouts are a fight set in a moving bus and another where Azreen and Azri take on all comers throughout a block of flats.

Unsurprisingly one of the best fight scenes is during the finale where Ruhian goes up against both Azreen and Azri. The fight put me in mind of the finale of Lethal Weapon 4 (1998), with Jet Li’s villain being so dangerous that our heroes had no choice but to team up in order to defeat him. It is the kind of tactics usually undertaken by the villains but seem justified due to how dangerous Ruhian appears.

Not to speak poorly of Jet Li or fight choreographer Cory Yuen’s work in Lethal Weapon 4, but Ruhian’s work here is of a much higher quality, incorporating both hand to hand and weapon based fight scenes. It is some of the best martial arts action you will see this year.

Currently streaming on Netflix, Wira should please the majority of action and martial arts fans. It is no game changer, with its overly simplified plot and the inclusion of some sub-par CGI being drawbacks. Still these aren’t enough to ruin what is one of the better martial arts films to be released this year.

Fans of Teh’s Paskal should look out for a mid credits scene that calls back to his previous hit. Speaking of Paskal, it would appear that Teh’s upcoming Baraka is another military based actioner, once again starring Hairul Azreen. I look forward to seeing how he is going to improve on his last two features.