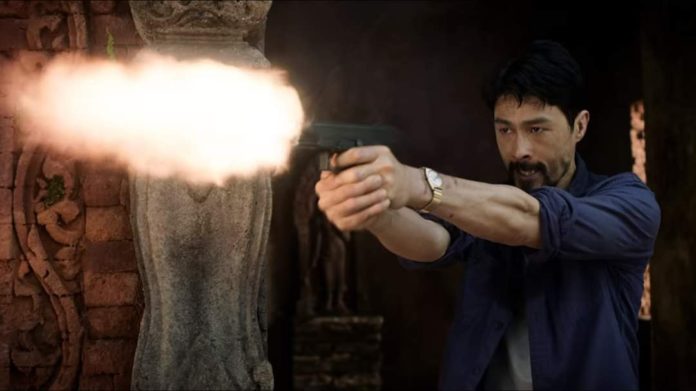 It is ironic that Spike Lee’s latest, Da 5 Bloods was produced for Netflix, as it is no doubt one of his most cinematic joints to date. It couldn’t have been released at a more appropriate time with everything that has been happening in the world recently.

We follow the exploits of four African American Vietnam veterans, the “Bloods”, who come together to recover the body of their fallen C.O as well as the $17 million in gold they found and buried.

After a recent landslide has uncovered the site where they buried the gold, the “Bloods” Paul (Delroy Lindo), Otis (Clarke Peters), Eddie (Norm Lewis) and Melvin (Isiah Whitlock Jr) meet with shady Frenchman Desroche (Jean Reno) who shows interest in buying the gold from them once they retrieve it.

They are accompanied by local guide Vinh (Johnny Tri Nguyen) as well as Paul’s son David (Jonathan Majors) who wants in on the action, which puts a strain on his and his father’s already difficult relationship.

Along the way the veterans are haunted by the ghosts of the past and reminded of the teachings of their legendary C.O. “Stormin” Norman (Chadwick Boseman).

D 5 Bloods is a powerfully told tale about the racial injustices of the United States. The film is equal parts war movie, crime thriller and history lesson. Lee has taken a script originally written by Danny Bilson and Paul De Meo and reworked it along with Kevin Wilmott to infuse it with his own political sensibilities, making Da 5 Bloods a more culturally significant piece of work.

The original script was called The Last Tour, and focused on the exploits of four white soldiers. This version was to be directed by Oliver Stone before he dropped out. At this point Lee became involved and decided to refocus the script to give it an African-American point of view.

Some of the factual information Lee manages to include in the film is both staggering and an eye opener for those not in the know. Like the previous BlacKkKlansmen (2018), Lee’s talent lies in the fact that he is able to incorporate historical and factual information naturally to proceedings, adding another layer to the on screen drama.

The main stand out statistic for me was the fact that at the time of the Vietnam war, African Americans only made up 13% of the U.S. population but made up for 25% of the soldiers taking part in the war.

This is possibly Lee’s most epic film to date. Running at over 150 minutes, many may think that it self indulgent but at no point did I feel the film lag, being expertly paced, with some fine action scenes peppered throughout. Da 5 Bloods is actually Lee’s most action heavy film of his career. Dont misunderstand, it isn’t an out an out action movie, but when the action comes it is viscerally staged.

Lee had already shown some skill in staging battle scenes with his last attempt at a war movie, the underrated Miracle at St Anna (2008). The action here surpasses anything in that movie, with Lee mixing it up with bloody battle scenes and smaller modern day set shootouts.

Da 5 Bloods also has a distinct look from other Lee movies, employing the same docu-drama techniques used in BlacKkKlansmen, with him incorporating a good deal of real life documentary footage into the action.

In addition, Lee changes the aspect ratio and film stock throughout, giving the film its own distinct look. When the film opens, it is shot in 1:85 before opening up to 2:35:1 when our leads finally return to the jungle. Working with cinematographer Newton Thomas Sigel, Lee fills the film with beautifully shot visuals.

For the flashbacks, Lee changes to 1:33:1 and shoots on 16mm. Interestingly in these scenes, Lee doesn’t employ any deaging techniques to cover the ages of our leads. At first I found this surprising, with our leads looking the same in the flashbacks as they do in the modern day segments, but it works, with Lee trusting the audience to just go along with it. One advantage of this is that there is no de-aging CGI to get in the way of the actors performances ala Martin Scorsese’s The Irishman (2019).

There isn’t a poor performance amongst the talented cast. Delroy Lindo is spellbinding as Paul, the de facto leader of the group who is so bitter and angry that he has let it influence every part of his life. Unable to put the past behind him, he is the most affected of the group.

With his casual use of racial and his MAGA support, he is a very difficult character to get behind, but Lindo gets to the core of the character with the audience getting to see how much he is suffering as the plot develops. Clearly struggling with PTSD, he is constantly struggling to live up to the ideals of his legendary C.O.

This only intensifies as they get deeper into the jungle, with greed and mistrust infecting his relationship with his friends and most importantly his son. In many respects, Lindo’s character owes a lot to Humphrey Bogarts from Treasure of the Sierra Madre (1948), a film which Da 5 Bloods shares some similarities with. This is no doubt intentional as Lee has spoken in the past of his love for that movie.

Delroy may be a standout but this isn’t to negate the quality work of his co-stars. Clarke Peters nerve fails to impress, with him being the most sensible of the group. His character is shown to have certain ties to Vietnam and his wish to return isn’t merely financial.

Isiah Whitlock’s character is the everyman of the group whereas Norm Lewis is the conscience, with his character wanting to use the gold to give back to the people instead of keeping it for themselves.

The relationship between Lindo and Jonathan Majors as his son is one of the main driving forces of the film. Majors is terrific in what could be a career changing role for him, holding his own against the veteran cast.

The lead performances are bolstered by some quality co-stars. Melanie Thierry, Jasper Paakkonen and Paul Walter Hauser show up around the mid way point as workers who deactivate landmines in the jungle. Both Paakkonen and Hauer had previously worked with Lee on BlacKkKlansman.

Jean Reno only really appears in two scenes and is really the only true despicable character. While other characters may do contemptible acts, they are at least understandable, whereas Reno’s character is clearly only in it for the money.

It was nice to see action star Johnny Tri Nguyen in a supporting role. From the trailers I expected his part would be nothing more than a cameo, but he actually has a considerable amount of screen time, even getting involved in a number of the films action scenes.

Sadly Nguyen doesn’t display any of his martial arts skills but this isn’t really that type of film. Still, it is just good to see him back on screen after being absent for the last few years. I hope this leads to further mainstream work for the talented actor.

Nguyen’s The Rebel (2007) co-star and real life ex-girlfriend Veronica Ngo appears briefly as the infamous Hannoi Hannah, broadcasting propaganda to the American troops. Fans expecting any of the skills Ngo showed in The Rebel and the recent Furie (2019) will be sadly disappointed with her screen time amounting to merely a few minutes. Hopefully her second Netflix movie of the year, The Old Guard (2020) will give her more of a chance to show off her action skills.

Lastly, there is the awesome Chadwick Boseman as “Stormin” Norman. At this point in his career Boseman is the biggest name in the cast, but he only appears in a handful of scenes. Even with relative screen time, he makes the most of it, making Norman a truly memorable character.

The musical score by Terence Blanchard is a fine accompaniment to the on screen action, with the inclusion of several Marvin Gaye songs being perfectly utilised.

Spike Lee has directed a number of classics throughout his illustrious career, and Da 5 Bloods is amongst them. It will be hard to find a better film this year. It may seem a shame that it is being released straight to Netflix, but in a way this is a good thing as potentially more people will get a chance to see it.