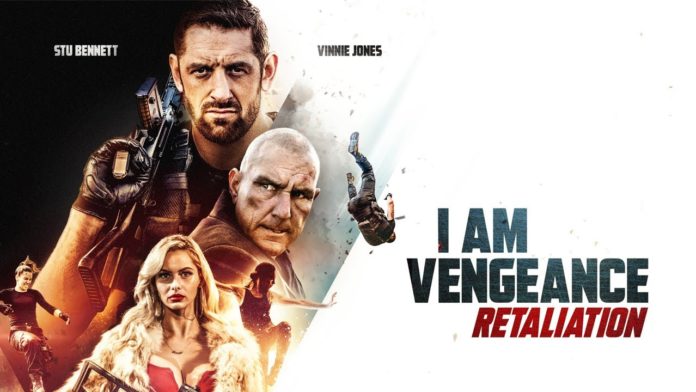 I first became aware of director Ross Boyask when UK publication Impact ran a series of articles on homegrown indie action movies. The articles covered the production of Boyask’s Ten Dead Men (2008), a low budget tale of revenge that showed the director’s clear love of the genre.

Although Ten Dead Men featured a series of well choreographed fight scenes by British stunt coordinator Jude Poyer, it was severely hampered by its obvious low budget. Still, while not totally successful it proved that with the proper resources Boyask was more than capable of constructing a well paced action movie.

This is why I was happy when it was announced that he was working on I Am Vengeance (2018). Unlike Ten Dead Men and his follow up feature Warrioress (2015), I Am Vengeance had a number of recognisable stars in front of the camera, most notably up and coming action star Stu Bennett and martial arts legend Gary Daniels.

While clearly still made on a low budget, with many of the drawbacks apparent in many recent DTV efforts i.e. digital gunfire and blood, it was Boyask’s most professional venture yet. Because of this it isn’t surprising that he would choose to direct a follow up.

I Am Vengeance: Retaliation features the return of ex special forces soldier John Gold (Stu Bennett), who this time round is giving the chance to bring his old teammate Sean Teague (Vinnie Jones) to justice, who years before betrayed him and his team. Gold would rather put a bullet in Teague’s head but is talked around by Frost (Mark Griffin).

Working under Frost, Gold teams up with a small group of special forces operatives who plan to capture Teague and transport him to a high security prison to pay for his crimes.

Of course, it wouldn’t be an action movie if everything went to plan. As well as having to deal with Teague’s gang who are hellbent on freeing him, they have to fight off the deadly Jen Quaid (Katrina Durden), who has her own reasons for wanting Teague dead.

Although clearly made on a limited budget, I Am Vengeance: Retaliation manages to improve on many aspects of the original, with the action being the most noticeable area. The fight scenes and gun fights are all better realized. Although still employing the dreaded digital gun fire, it is of a much higher quality than the original.

Surprisingly considering this is a starring vehicle for Bennett, the best fight scenes are awarded to Katrina Durden, who is the clear scene standout of the movie. One of the best fights of the movie is between her and Phoebe Robinson-Galvin as a member of Gold’s team.

This isn’t to take away from Bennett’s involvement, as he still gets ample chance to show off his skills, with the fights using his size to their advantage. A mountain of a man, Bennet is very much in the mould of the action stars of the 1980’s such as Arnold Schwarzenneger and Dolph Lundgren.

Many wrestling fans may know Bennett better under his WWE pseudonym Wade Barrett. Personally I wasn’t aware of his wrestling career, with him first coming to my attention through his co-starring role in Eliminators (2016), where he got to face off against Scott Adkins. Sure Bennett’s acting is a little rough around the edges but he is a likeable presence and I can definitely see a future in action movies for him.

Vinnie Jones is always good value, with him chewing up the scenery as the villainous Teague. Thankfully Jones has enough of a personality to make up for how underwritten his character is. The script does allude to his and Gold’s past and how he set up their team, but it doesn’t really get into it.

The main issue with casting Jones as the villain is that it is clear that he is no physical match for Bennett. Unlike Gary Daniels in the first film, who actually put Bennett through his paces when they faced off, at no point do you think that Jones could best Bennet in a fight.

However, Boyask does a good job of covering up Jones’ limitations, employing stunt doubles and using particular camera angles to at least make his and Bennett’s fights seem plausible.

While Bennett, Durden and Galvin all get their chance to shine, I was disappointed by the waste of martial artist Jean Paul Ly. Ly has already proven to be an excellent performer with his roles in Jailbreak (2017) and Nightshooters (2018), so I was quite surprised how little he was used, with him only getting a brief fight scene with Greg Burridge during the finale.

One area that isn’t an improvement over the original is the script. Like the first movie, it is the work of director Ross Boyask. It is filled with the usual action movie cliches, such as the introductory scene that is merely there to show how badass the lead character is and has no bearing on the plot.

There are also the typical scenes where the villains hold the heroes at gunpoint, but instead of shooting them they decide to give a running commentary of their plans.

Actually, considering that everyone speaks of Gold being a badass, this happens to him quite a bit. If it wasn’t for our bad guys guns jamming and running out of bullets, he would be dead. Still, these kinds of cliches are to be expected in action movies like this.

One element I did enjoy in the original was the small town setting and how it was held in the grip of fear by a team of ex soldiers, who were using the town as the base of operations for their drug business.

Sure, it wasn’t the most original set up, but the seemingly nice country village was a great setting for the action. This time round, other than the opening, the majority of the film looks as if it was filmed on an old aircraft hangar. Sure, the production value seems higher this time round, but it doesn’t seem to have been spent on the locations.

Whilst I Am Vengeance: Retaliation isn’t perfect, it has enough quality action scenes to make up for its lacklustre plot and somewhat low budget. It is another step in the right direction for Boyask and I look forward to seeing what he comes up with next.