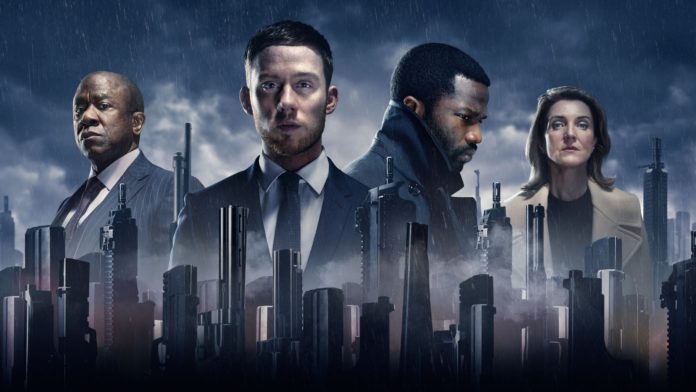 With the release of The Raid (2011) and its sequel, Gareth Evans proved to be one of the best action directors to emerge in the 21st Century. Both films were filled with expertly choreographed martial arts battles and bone crunching violence. Even Apostle (2018) which ended up being a departure from his action roots with him moving into more horror related territory didn’t let up on the level of gore.

Like a modern day Game of Thrones (2011) minus the dragons, Gangs of London is a beautifully filmed tale filled with sadistic criminals, family betrayals and some of the best action scenes of the year.

Evans gets things off to a great start, directing the feature length pilot with his usual flair. Opening with Sean Wallace (Joe Cole) in the middle of setting a man on fire we then flash back to a day before and the murder of his father, London gangster Finn Wallace (Colm Meaney).

It is made clear that Sean won’t rest until he finds out who murdered his father. Sean quickly puts a stop to all criminal activities until his father’s murderer is caught. As expected this doesn’t exactly make him popular with the family’s partners/rivals. It isn’t long until a full on gang war is brewing.

Getting drawn into this is lowly enforcer Elliot (Sope Dirisu), who finds himself being brought further and further into the fold, working alongside Sean to root out the identity of the murderer. As the show progresses we get to find out more about Elliot and if he can be trusted.

Evans establishes the style of the show, with the action almost on par with his movie work. The use of martial arts may seem out of place in a London gangland setting but you will quickly get used to it. It certainly helps set the action apart from similarly themed shows. A bar room brawl is excitingly brutal, with Elliot taking on a roomful of thugs armed only with a dart.

Like The Raid, Evans employs some truly creative camera work to perfectly capture the action. Evans returns to direct episode 5, which is the clear standout of the series. It is safe to say that his fans will not be disappointed, having one of the most memorable and blood soaked action scenes I have seen in years. Well at least since The Raid 2 (2014).

After the first episode, The Nun (2018) director Corin Hardy takes over, going on to helm five of the remaining episodes. For the most part, Hardy retains the look and feel of what Evans has already established. However, Evans was still on hand throughout a number of these episodes directing the impressive action scenes.

Standout sequences from these episodes include the Wallace family’s assault on a gypsy camp as well as a one on one fight scene between Dirisu and Scottish martial artist Gordon Alexander.

Surprisingly it is French director Xavier Gens who slightly lets the side down. Having shown a propensity in the past for violent mayhem with the likes of Hitman (2007) and Froniere(s) (2007), his episodes don’t live up to what has come before.

This isn’t to say that they are bad, as they are still competently directed with one particular toe curling scene being a standout. It is just that they don’t have the same level of action or destruction that has come before (or after in this case). Perhaps this is why they were handed to Gens, as they are less action and more character focused, with an excursion into body horror which isn’t a surprise from Gens.

In regards to the cast, there aren’t any poor performances. Made up of interesting and compelling characters, you would be hard done by to find any redeeming qualities amongst them. Good people they are not. This isn’t to say they aren’t tough or even brave, just that most of their actions air on the side of villainy.

Joe Cole as Sean does at least appear to have some idea of right and wrong, but he is no hero. The closest the show has to a hero is Dirisu’s Elliot. To say too much about his character however may ruin the show.

In matter of fact, while the promotional material has sold this show as a Joe Cole vehicle, no doubt due to his popularity from Peaky Blinders (2013), this is clearly Dirisu’s show with him getting the majority of the screen time and all the best moments.

This isn’t to negate the work of Cole as he is still terrific as the hot headed Sean. He is the catalyst for everything that happens. Clearly out of his depth, his impulsiveness is what leads to much of the violent mayhem we witness.

There is also strong support from the likes of Michelle Fairley as Sean’s mother, who proves that she can be just as sadistic as the men when it comes to laying out punishment. Those only familiar with Fairley as Catelyn Stark from Game of Thrones are in for a treat.

Other standouts are Lucian Msamati as Finn’s oldest friend Ed , who has his own secrets to keep and Narges Rashidi as the dangerous Lale who has her own mission of vengeance.

There is also the terrific Mark Lewis Jones who plays a tough family patriarch. Only appearing in a few episodes, he certainly makes an impression with him featuring in what has to be the most gross out scene of the series. You will know it when you see it. This marks Jones second time working for Evans, with him previously playing the villain in Apostle.

While Gangs of London isn’t for the faint hearted, those who have the stomach for it are in for what must be the best television series to be released in 2020. Let’s hope that it isn’t too long before we get news of a second series/season.