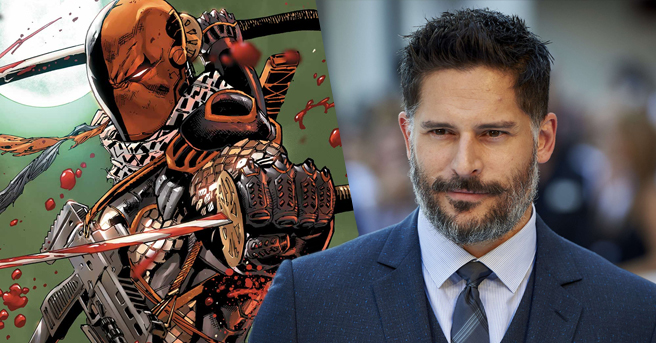 UPDATE: As DC and Warner Bros moves into another direction with their DC Universe including replacing Ben Affleck with Robert Pattinson for the upcoming The Batman film directed by Matt Reeves, Deathstroke is one of the films caught in the crossfire that will longer see the light of day. Director Gareth Evans recently spoke to Yahoo Movies UK revealing what would have been:

“I was actually quite enthused and excited about [Deathstroke] back in the day, when it was first pitched to me. I met with them, and talked to them about it, and was certainly attached to it at a certain point. I’ve spoken to Joe Manganiello, who was attached to star as Deathstroke. I spoke to him a while back, and we both lamented the fact that it didn’t happen. We had ideas of the kind of style that we would have gone for with that, which would have married some of the more grounded style that I have, but then because of the world of it, it would allow me to be a bit more flamboyant and a bit more stylised. We could have taken it in some really interesting areas…We had some pretty bold ideas there that could have been really visceral and really fun. I wanted to tell something that would be a lean story, that would be kind of an origin of that character. Back then, I was massively influenced by the noir films coming out of South Korea, so that was my pitch. I was like, these films are amazing: the texture, and the tones of colours, the grit and the aggression of them is super interesting to use to tell Deathstroke’s story.”

It is such a travesty that fans of the genre will never get to see Evans’ vision of a “grounded” and “visceral” Deathstroke solo film. There is so much potential here for this to be the most badass DC film to date. Such a damn shame.

UPDATE: Director Gareth Evans recently spoke to Comicbook.com confirming that his involvement with ‘Deathstroke’ is simply a conversation he had with DC and Warner Bros. execs with nothing moving forward since:

“I had a phone call which I think was publicized a bit, about Deathstroke with DC. We talked about that before, we had a few conversations. One of the guys at DC and at Warner Brothers, one with Joe, who has been on the character for some time now, who is super passionate about that character, by the way. I’ve never met anyone who knows more about their character.” He added, “Nothing really went beyond those conversations. I haven’t heard anything for a really long time. To be honest, every time I see an article written I keep wanting to ask, ‘Okay, what is it you guys know that I don’t know?’ Because I haven’t heard anything for a good while yet. So I don’t know if that will ever come back full circle at some point. But I know I haven’t had any conversation about that project for a long time now.”

Lets cross our fingers that Evans is still onboard once Warner Bros. decides to move forward with the project.

UPDATE: During the red carpet premiere of Rampage, star Joe Manganiello revealed to Variety that Deathstroke is definitely still “in the works”.

.@JoeManganiello says there are “things in the works” for a #Deathstroke film at the #Rampage premiere pic.twitter.com/APCPxYOUhR

Best known for introducing audiences to the groundbreaking martial arts action film The Raid, director Gareth Evans is hitting the big leagues in the comic book world as he is in talks to helm DC’s Deathstroke!

Deathstroke was previously planned to be a villain in the upcoming Batman solo flick, but once Matt Reeves took over as director everything was thrown out the water with a new script in place. Actor Joe Manganiello (Sabotage) was cast to play ‘Slade Wilson’ aka ‘Deathstroke’ at the time and now it looks like he will be getting his own solo film instead. This is all thanks to Evans impressing DC executives with his pitch that the company decided to go forward with a spinoff film.

Created by Marv Wolfman and George Perez, Deathstroke is a mercenary and assassin who first appeared in “The New Teen Titans” #2 back in 1980.

Deathstroke taking down his targets with The Raid style mayhem? Take my money.