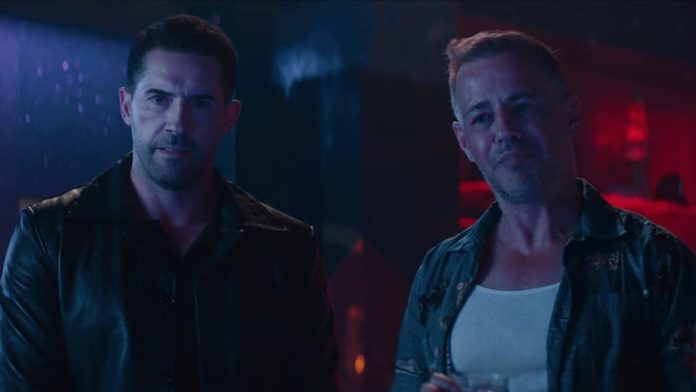 Considering the seemingly finite nature of the finale of The Debt Collector (2018) I was somewhat surprised when a sequel was announced. I was interested in how they would get round the apparent demise of the two leads and if this would perhaps be an in name only sequel, just with the same cast.

But no, I am glad to say that Debt Collectors is a full on sequel, with Scott Adkins and Louis Mandylor returning as the dynamic duo of French and Sue. They reunite and travel to Las Vegas to collect money from violent Casino owner Mal Reese (Marina Sirtis). Complicating matters is the fact that Reese just so happens to be an ex lover of Sue. An especially violent ex-lover.

Reese isn’t the only person they have to collect from. Further collections take them back to L.A. and into the path of vengeful crime boss Molly (Ski Carr), who is looking to make French and Sue pay for the death of his brother. As expected things quickly escalate into violence with French and Sue having to fight their way out of the chaos.

It isn’t only our leads who return to the franchise. Unsurprisingly Jesse V.Johnson is back in the directing seat, with the Debt Collectors marking his and Adkins sixth collaboration, discounting Adkins brief appearance in Johnson’s Pit Fighter (2005).

Although not reaching the lofty heights of Accident Man (2018) or Triple Threat (2019), Debt Collectors is a finely paced exercise in action cinema that not only features great performances and action scenes but manages to surpass the already excellent original.

As expected from Johnson, the action is first class, featuring a mixture of hand to hand fight scenes and gun fights. As per usual, Johnson thankfully favours practical effects over CGI, with the blood squibs taking me back to the great actioners of the 70’s and 80’s.

Working alongside regular director of photography Jonathan Hall the action is beautifully shot, where you can clearly see the action unfolding. There is no obtrusive shaky cam here. Sean Murray’s score proves to be a great accompaniment to the on screen events, with influences ranging from spaghetti westerns to the great action thrillers of the 1970’s.

Smartly, Johnson has once again employed the talents of fight choreographer Luke Fontaine, who also worked on the first movie as well as a host of other Johnson features such as the recent The Mercenary (2019). The opening bar fight is a well done re-introduction to Adkins character as well as featuring a nice cameo from actor/swordmaster Anthony De Longis.

As good as the other fight scenes are, the real standout is a lengthy battle between Adkins and Mandylor which is a clear homage to John Carpenter’s They Live (1988). The scene is as funny as it is violent.

While Johnson makes sure to feature the requiscent action that fans expect, he gives as much focus on quieter character moments. Once again working with co-writer Stu Small, they create some beautiful character moments filled with memorable dialogue that at times hit the funny bone as well as pull at the heart strings.

One of the best non-action scenes features a discussion between Adkins and Mandylor around their after life experiences. Initially starting off as a comedic recollection of how Adkins had to have his clothes removed in the emergency ward, it segues into a heartfelt moment where Mandylor reminisces about the death of his daughter and how he saw her as he felt his life passing away.

Speaking of Adkins and Mandylor, they are again a fantastic double act. Like the best buddy movies, they antagonize each other as much as they get on. French is a role that gives Adkins plenty of chances to show off his martial arts skills, but also gives him much more of a character to play than some of his lesser action movies.

It is clear that Adkins partnership with Johnson brings out the best in him, as Johnson seems to focus on his acting as much as he does on his martial arts skills. This has been evident in every one of their collaborations, albeit some more than others.

As great as Adkins is, the real acting honours goes to Louis Mandylor as Sue. Like the first film, Mandylor gets the best dialogue of the film as well as the more rounded character. In many respects, Sue feels more like the main character, with his ties and loyalties to others being the main driving force of the plot. Never one to disappoint, I would say that out of the four films he and Johnson have worked on together that this is his finest performance.

As well as our two leads, the cast is rounded out by the likes of Vladimir Kulich, Marina Sirtis and Mayling Ng, who all show up in smaller roles.

One thing I have always appreciated about Johnson’s movies is his willingness to cast a range of actors that have since fallen out of favour in Hollywood. The likes of Tom Berenger, Eric Roberts and Dolph Lundgren have all featured in his movies in the past.

This time he has cast 80’s bad guy Vernon Wells, here showing up as one of the unlucky people French and Sue show up to collect from. While it is only a small role, it’s great to see him featuring in a quality production for a change. This isn’t the first time he has worked with Johnson, working with him on a number of occasions, most notably Charlie Valentine (2009).

Wells isn’t the only actor to appear that has worked with Johnson in the past. Both Marina Sirtis and Vladimir Kulich show up in small but pivotal roles. Also look out for the towering Mayling Ng, whose muscled physique manages to strike fear into both French and Sue.

The Debt Collectors is another in a now long line of excellent Jesse V. Johnson features, filled with everything we have come to expect from his films. With a clear shortage of action movies this year (for obvious reasons) this will certainly do the trick.

Adkins fans also have the upcoming Seized (2020) which finds him reteaming with action specialist Issac Florentine, another director who gets the best out of Adkins. As well as this, there’s the interesting sounding Legacy of Lies (2020), which features the work of fight choreographer Tim Man who has worked with Adkins numerous times.