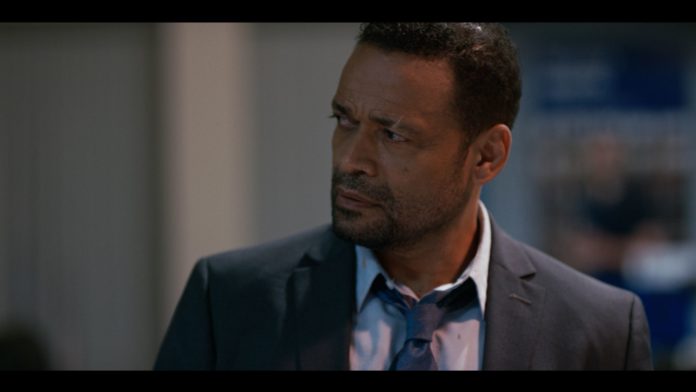 Based on a true story, Nick Leisure’s A Clear Shot is bolstered with good performances and a tension filled plot. Unfortunately it is hampered by a clear low budget which turns the proceeding 90 minutes into little more than a TV movie like thriller of the week.

If not for some choice swear words, A Clear Shot would be the kind of production that could be found on the Hallmark channel. Still for lovers of true crime tales there is enough here to make it worth while for at least one viewing.

In 1991 a Good Guys electronics store in Sacramento, California was held up by four armed gunmen after they had already failed at another robbery earlier in the day. The robbery quickly escalated into a hostage situation, with the robbers herding all customers and staff into a group before shooting at the ceiling of the store. It wasn’t long until both the media and police became involved.

The hostage takers turned out to be four Vietnamese refugees who had become disenchanted by their inability to learn English and find employment. To date the hostage crisis remains the largest hostage rescue operation in U.S. history.

Writer/Director Nick Leisure does take some dramatic licence with the actual events. Instead of taking place in 1991, the story takes place in modern times. While it doesn’t clearly state the date, it is obvious with the technology shown in the store such as DVD’s and discussions about Blu-Ray players that it has been brought up to date.

This is clearly for budgetary reasons. It would have been too expensive for Leisure to make this a period piece with the limited resources at hand.

Clearly, Leisure has used the true story as primarily a basis, with him adding in some additional plot points and characters to keep things interesting.

Considering his background in music videos, I was quite surprised Leisure didn’t do more with the visual aspects of the film to try and raise it above similar fare. Sure it is low budget but other directors have done more with less.

Still, while Leisure directs in a mostly workmanlike fashion, he does get good performances from his cast, especially the always dependable Mario Van Peebles as hostage negotiator Nick Gomez. Not only does Gomez have to try and calm down the hostage takers, but have to deal with those in his own force who would rather take a more forward approach by storming the store with heavy artillery.

Van Peebles looks as if the whole world is on his shoulders. Gomez clearly has his own issues, but doesn’t let it get in the way of his job. A problem with alcohol is alluded to with him sneakily taking a swig from a hip flask when the situation gets particularly desperate, but other than this there isn’t a great deal of background to his character.

The hostage takers are actually giving more depth than Gomez, with Leisure including a series of flashbacks of how they have ended up on the path they’re on. Newcomer Hao Do as Loi is the standout amongst the hostage takers, with him quickly coming to the realisation he is ill equipped to deal with the situation.

Other standouts are Marshal Hilton as Kappy, Gomez’s fellow cop who at first seems as if he is going to be antagonising until he comes to Gomez’s aid. Hilton imbues the character with a likeable personality which makes him stand out from the crowd. There is also Sandra Gutierrez as a particularly strong willed hostage who does her best to protect her fellow hostages.

The normally reliable Glenn Plummer is wasted in a small role as one of the hostages, who at first seems as if he will be a major player only to not get much to do thereafter. It just seems strange to cast an actor of Plummer’s talent in such a nondescript role.

Also look out for Mandela Van Peebles, Mario’s son. It would be hard to miss him as he looks and sounds like a young version of his father. Strangely, the two actually never share a scene together on screen.

In certain regards it seems as if Leisure is a better writer than director, with his script being one of the better elements of the film. While there is the odd cliche of the genre, this is to be expected in a film of this type.

In terms of action, there really isn’t any. While the promotional material may have you thinking otherwise with its use of explosions and helicopters, A Clear Shot is primarily a drama.

The closest to an action scene would be the final assault on the store, but this is over in minutes. Even then it would probably be considered more of a skirmish than an action scene. Like the majority of DTV fare, the muzzle flashes and blood has been added digitally which further harms the overall effect of the scene.

In order to enjoy A Clear Shot I would suggest lowering your expectations. Those expecting an action movie are surely to be disappointed. With this in mind, there is still enjoyment to be had.

For those wanting to see Van Peebles in more action orientated fare they still have the upcoming Seized (2020) to look forward to. Seized comes from director Issac Florentine and will find Van Peebles sharing the screen with martial arts legend Scott Adkins.