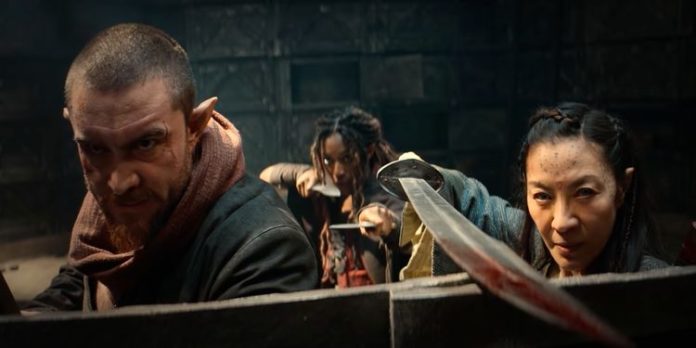 UPDATE: The first Teaser Trailer for The Witcher: Blood Origin is here!

Michelle Yeoh stars alongside Sophia Brown (The Capture) as Éile, a warrior that abandons her clan and her post as the queen’s protector to wander the world as a singer and Laurence O’Fuarain (Viking Destiny) as Fjall, a warrior who joins Éile in her quest.

UPDATE: Martial arts legend Michelle Yeoh (Gunpowder Milkshake) is set to star in The Witcher: Blood Origin. Yeoh will play Scían, the very last of her nomadic tribe of sword-elves.

Official character description: “No one can come close to her artistry with the blade, and no one carries as much loss within their heart. When a chance presents itself to retrieve a stolen sacred sword, taken from her fallen tribe by nefarious means, she launches herself into a deadly quest that will change the outcome of the Continent.”

Netflix has announced a prequel series to The Witcher is coming titled The Witcher: Blood Origin. Blood Origin will be a six part, live-action limited series that is set in an elven world 1200 years before the world of The Witcher. The prequel will tell a story lost to time – the origin of the very first Witcher, and the events that lead to the pivotal “conjunction of the spheres,” when the worlds of monsters, men, and elves merged to become one.

“As a lifelong fan of fantasy, I am beyond excited to tell the story The Witcher: Blood Origin. A question has been burning in my mind ever since I first read The Witcher books – What was the Elven world really like before the cataclysmic arrival of the humans? I’ve always been fascinated by the rise and fall of civilizations, how science, discovery, and culture flourish right before that fall. How vast swathes of knowledge are lost forever in such a short time, often compounded by colonization and a rewriting of history. Leaving only fragments of a civilization’s true story behind.The Witcher: Blood Origin will tell the tale of the Elven civilization before its fall, and most importantly reveal the forgotten history of the very first Witcher,” said Showrunner Declan de Barra.

The Witcher: Blood Origin will shoot in the UK.