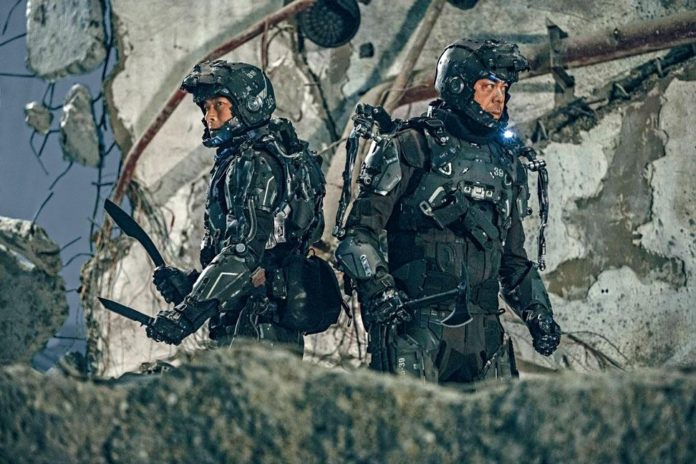 UPDATE: Check out the latest Poster for Warriors of Future which has been pushed back till later this year.

UPDATE: Plot details has been revealed as Warriors of Future follows the story of “a meteorite crashing down on a barren future Earth ravaged by pollution and global warming, bringing with it a fast-growing alien vine that purifies the planet but kills everything in its path. Armed with the plant’s genetic map, the heavily armored military of an unnamed city tries but fails to destroy it and uncovers a conspiracy”.

Directed by special effects maestro Ng Yuen-Fai, the film is set for release in Fall of 2019.

UPDATE: The first Poster (above) has been revealed along with latest images featuring Louis Koo (Flashpoint) and Sean Lau (Call Of Heroes). The film has been renamed to Warriors of Future.

Formally known as Virtus, special effects for the HK $300 million budget sci-fi thriller is handled by FatFace Production LTD, the company behind Storm Warriors and Tai Chi Hero. Check out the behind-the-scenes featurette below.

Plot details has not been release but from the look of it we can expect this to have Edge of Tomorrow-esque type action, Hong Kong style.