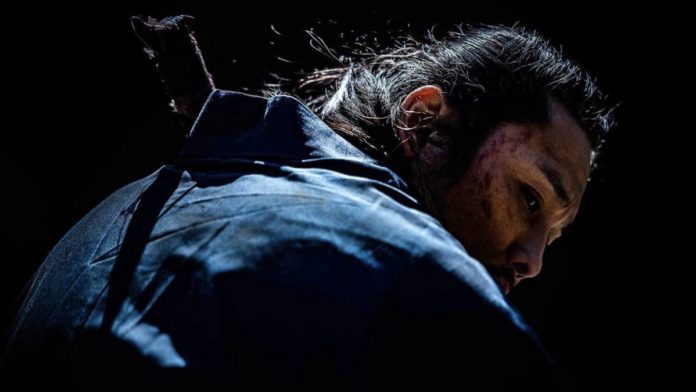 Tak Sakaguchi (or just Tak as he is now credited) is back once again to unleash all kinds of punishment on many unwitting opponents in Crazy Samurai Musashi, his latest collaboration with director Yuji Shimomura.

Playing as part of the Fantasia 2020 film festival, Crazy Samurai Musashi would have been a definite crowd pleaser if it weren’t for the fact that the film festival has had to change this year due to the Covid-19 Pandemic, with this being the first online edition of the event.

Still we should be thankful that the good people at Fantasia have still made it possible for us to get a chance to view films that would otherwise be unavailable, with this being the first opportunity Stateside viewers will have to see Tak’s return to action.

The real life exploits of famed Samurai Musashi Miyamoto have been portrayed on screen numerous times throughout the decades, most notably by Toshiro Mifune in Hiroshi Inagaki’s famed Samurai trilogy (1954-55).

While he has mostly been portrayed as the hero, some productions have cast him as more of a villain or something in between. Upon his initial introduction in Crazy Samurai Musashi, you would find it extremely hard to class him as any kind of hero. Tak’s take on the character has him carry out the most deplorable act that would classify him as the villain in any other film.

This isn’t to say that his opponents are any better. With all their claims of being honourable samurai, they are still planning to gang up on one man in order to defeat him in what is meant to be a one on one duel.

The main body of the film takes place after his famous duel with Seijuro Yoshioka. After defeating the patriarch of the Yoshioka clan he is challenged to another duel, which is really a ploy to lure Musashi to an ambush where he ends up having to face off against 400 Samurais and Mercenaries (or 588 if you believe the interviews with Tak Sakaguchi).

And this is really it for the plot. If you want a historical telling of the life of Musashi Miyamoto you would be better seeking out the aforementioned Samurai trilogy or Tomu Uchida’s 5 part telling of his story. There is also an interesting documentary called Samurai (2010) which should please MAAC readers as it is hosted by martial arts legend Mark Dacascos.

Crazy Samurai Musashi marks Yuji Shimomura’s third film as director, although going by the timeframe of the production it could be classed as his second. All have featured Tak Sakaguchi in a leading role. As well as this he has been fight choreographer on many of Tak’s movies, most memorably on Versus (2000) as well as the recent Kingdom (2019). It is clear that they bring out the best in each other.

Filming the action in one long continuous take is both to the film’s benefit and to its detriment. The long take gives the action a sense of pace and urgency. However it also limits the style of choreography that the filmmakers are able to utilise.

The fight choreography from Nagano Yasutako is well realized, but due to the shooting style it is more simplified from previous Tak movies. In addition, at 77 minutes long the action does get slightly repetitive.

Still, this in no way takes away from the massive undertaking this must have been. It would have been a daunting task to undertake such an elaborate fight sequence, where one mistake could potentially ruin the entire film.

In matter of fact, the main part of the film was actually shot 9 years ago, which explains why Tak looks considerably younger than he does during the closing moments of the film. During the shooting Tak was faced with a number of injuries, with him breaking his finger only 5 minutes into the 77 minute long take.

The fact he finished the sequence just shows his determination. By the end of the sequence he had broken his ribs and cracked some teeth. This is one of the reasons why he had previously spoken of retiring from the business.

Amazingly, these scenes sat around for years unused before it was decided to film extra material and release it as a complete feature. While it doesn’t compare with director Yuji Shimomura’s previous Tak starring vehicle Re:Born (2016), it would still have been a shame to not get a chance to see the work they carried out.

Shimomura smartly paces the action, breaking it up every now and again, not only giving the audience a chance to breathe but giving his leading man a brief chance to rest.

Interestingly, the screenplay is the work of Sion Sono, but there isn’t really anything in the way of character development, and there is very little plot to speak off. This isn’t a complaint as Crazy Samurai Musashi is exactly as I expected it to be.

The work of director of photography Yasutaka Nagano should also be commended, with him capturing the on screen action in a clean and professional manner. At no point is the action obstructed with the choreography being perfectly captured.

There are some technical problems with the visuals but these aren’t really down to Nagano, being more to do with the decision to shoot the majority of the film in one take. The use of digital blood is slightly obtrusive but is probably the only way it could be shown.

Additionally, although Tak is cutting through countless opponents, there is no blood apparent on his clothes or sword. This is somewhat rectified as the film progresses, with the filmmakers able to add blood to his face and clothes when he is momentarily off camera.

There is also a nice score by Kawai Hidehiro that matches well with the on screen carnage.

In terms of performances, Tak really gives the film his all. He doesn’t exactly have a lot of dialogue, with his performance mostly being physical. As the film progresses he gets increasingly more tired which is perfectly conveyed.

At certain points Shimomura focuses on his face to show his clear desperation. At one point he even comments on how many he has had to fight, with his disbelief on how many more he finds himself cutting through.

The rest of the performers only show up fleetingly, unless you count the stuntman who gets killed numerous times during the course of the film. It is mostly a one man show, one which Tak carries admirably on his shoulders.

Many could view Crazy Samurai Musashi more as an experiment than a fully fledged feature, and in certain respects they would be correct. It is lacking in many aspects of what people look for in a movie, with very little in the way of plot or characterization. But it is perfect for those who feel that certain action movies are overly talky, with convoluted plots.

No such criticisms could be made here. There is roughly 90% action to 10% dialogue/drama. While in no ways perfect, Crazy Samurai Musashi is still a worthwhile example in simple, straight forward action cinema. It is tailor made for both fans of Jidai-Geki as well as those thirsting for more action from Tak Sakaguchi. I am sure it will no doubt become quite the cult hit like many of his previous films.