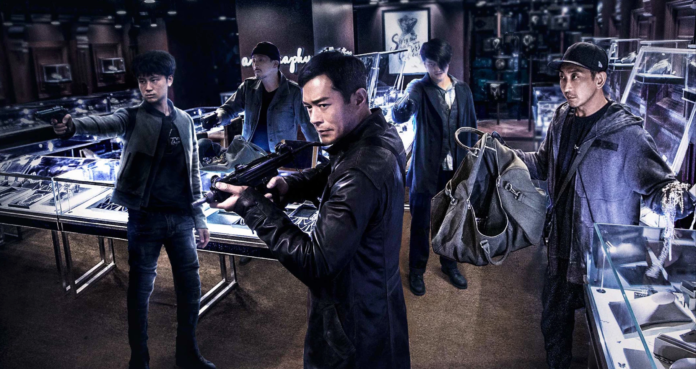 Released in China last year, A Witness Out of the Blue is finally being released to Western audiences, forming part of Fantasia 2020’s lineup.

While the festival is only online this year, this in no way harms a film like A Witness Out of the Blue. In many respects the small scale nature of the film means that it actually works better with a home viewing.

This isn’t to do the film a disservice, as its winning mixture of action, quirky characters and a mystery plot that would make Agatha Christie proud. It is one of the better films to come out of Hong Kong recently.

Equal parts murder mystery and crime thriller, the plot focuses on career criminal Sean Wong (Louis Koo) who finds himself on the run after a botched robbery that left numerous people dead, amongst them an undercover cop. Because of this he finds himself pursued by Inspector Yip (Philip Keung).

As well as having to hide from the police, Sean finds his fellow robbers being picked off one by one. The only witness to the first murder is a parrot, who Inspector Lam (Louis Cheung) thinks can assist him in capturing the murder. As Lam continues in his investigation it becomes clearer that Sean isn’t the one carrying out these murders.

A number of suspects become apparent as both Lam and Wong carry out their own investigations, with Lam even suspecting his superior Yip who may have let his need for vengeance get in the way of carrying out his duty. With the assistance of the parrot, Lam is determined to find out the truth while Wong must race against the clock and try to save his accomplices before they become the murderer’s next victim.

After watching Hong Kong movies for the better part of three decades I have learned not to be put off by plot elements that would normally be classified as farcical. To be honest, in many instances this is what draws me to them.

Whilst the synopsis of A Witness Out of the Blue does sound faintly absurd, writer/director Fung Chih-Chiang does a stand up job of integrating the more ridiculous elements of the plot with the more straightforward thriller plot to make a coherent whole.

Considering how gimmicky the idea of the only witness to the crime being a parrot, Chiang doesn’t actually dwell on this element, with this only being another part of a larger mystery.

There are instances where it does seem as if it is going to verge too far into quirkiness, such as the relationship between Louis Cheung’s Detective Lam and the parrot, but Chiang manages to keep proceedings mostly grounded, with the main investigation capturing the attention.

The more quirky and comedic aspects of the plot aren’t surprising when you take into consideration the other films Chiang has worked on. While he has only directed a small handful of films, some of his writing credits include the likes of comedy classics Shaolin Soccer (2001) and The Mermaid (2016).

Out of his directorial efforts, A Witness Out of the Blue is his most gritty work, more in line with the work of the film’s producer Derek Yee than any of his own work behind the camera.

This gritty feeling is extended into the film’s action scenes. Choreographed by Jack Wong, they are smaller scale affairs than the Hong Kong actioners of old but they are entirely fitting with the story being told. Wong’s action choreography can also be seen in another film premiering at Fantasia 2020, Johnnie To’s Chasing Dream (2019).

There are also some nice additions to the plot, with not only the parrot element but the fact we are shown Wong’s deteriorating mental state, where he finds himself continually hallucinating about his dead partners in crime. It isn’t all doom and gloom for Wong however, with him developing a touching bond with shortsighted landlady Ding (Jessica Hester Hsuan).

These plot elements would be nothing if they weren’t bolstered by some great performances. This was one of seven films Louis Koo starred in during 2019 and features probably his best performance of the lot.

There have been comments from some in the past that he can appear wooden, but that isn’t the case here, with Koo giving a multi layered performance. In no way is Sean a hero, but with his continuing guilt over the death of his accomplices he is shown to have some level of morality.

Some of his best scenes are those he shares with Jessica Hester Hsuan, who is also terrific as the overly nosy but endearing Ding. The relationship that builds between the two is definitely the heart of the film.

Koo isn’t the only lead character, with Louis Cheung’s Detective Lam having his own fair share of screen time, with the two carrying out their own separate investigations. Cheung has been guilty in the past of going too broad with his roles, but thankfully he is kept in line this time, with his Inspector Closeau like antics being well incorporated.

Additionally there is solid work from the always dependable Philip Keung, who doesn’t have as much screen time as his co-stars but still makes an impression as the determined detective Yip. Keung additionally has another film showing at Fantasia 2020, the excellent crime thriller Sheep Without A Shepherd (2019), where he unsurprisingly gives another great performance.

Smaller roles from the likes of Sam Lee, Patrick Tam and Andy On are all important to the main plot even if they only appear fleetingly, with each of them doing what they can with their limited screen time.

A Witness Out of the Blue wont go down as a classic of Hong Kong cinema, but it is still a minor success that has another terrific lead performance from Louis Koo and proves that director Fung Chih-Chiang is one to keep an eye on.