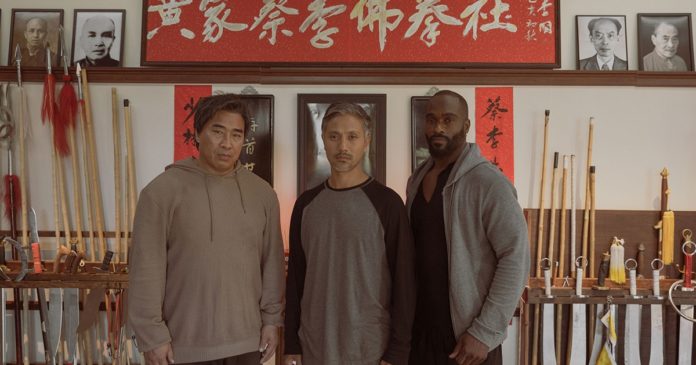 The martial arts films shown at Fantasia 2020 have featured lone Samurai’s taking on 500 men, MMA musicals and Donnie Yen battling police corruption. Premiering at the festival, action comedy The Paper Tigers is a more grounded tale, with a mostly believable plot and a focus on characters that the audience can relate to.

Opening in the 1980’s, we are introduced to young martial arts prodigies Danny, Jim and Hing. Taught martial arts by their stern master Cheung (Roger Yuan), the three take what they have learned and challenge others at school. They document their many battles on VHS tapes which play over the opening credits.

We then flash forward to the present, where our three legends lives haven’t exactly turned out as expected. Danny (Alain Uy) is out of shape, went through a divorce and has an uneasy relationship with his son. He isn’t exactly what heroes are made of, with him not above getting his son to lie for him so he doesn’t seems like the deadbeat father his ex-wife clearly thinks he is.

Hing (Ron Yuan) has similarly changed. Having put on weight and walking with a permanent limp, he is a far cry from the lean mean fighting machine we were introduced to during the opening.

Jim (Mykel Shannon Jenkins) has fared slightly better, with him at least staying in considerably good shape, with him now working as an MMA trainer. The three of them haven’t spoken in years, after becoming estranged after a visit to Japan. They end up re-uniting after the murder of their master, with them having to put aside their differences in order to find out what really happened.

Initially backed by a Kickstarter campaign, the filmmakers eventually were able to secure the funds through various investors that enabled them to shoot the movie.

It is amazing to think that the entirety of the film was made on such a low budget, with it having a professional sheen that is lacking from films with ten times its budget. It is equally impressive when you realize that this is director Tran Quoc Bao’s first full length feature. He displays a fine balance between drama, action and humour that is on par with more prolific directors with years of credits behind them.

Bao has created a lovingly told homage to the martial arts films of old that is filled with enough Kung Fu and humor to place it above any recent action comedies out of Hollywood.

Unlike some more experienced directors, Bao clearly recognizes that it doesn’t matter how good the action and spectacle is if you don’t care about the characters. Having also written the screenplay, The Paper Tigers‘ characters are multifaceted with real life problems. While the Kung Fu element isn’t exactly true to life, Bao perfectly integrates it so that it feels natural to the plot.

Bao smartly doesn’t make the Kung Fu element the film’s primary focus. This is very much a comedy, with some hilarious dialogue. The dramatic elements are additionally handled well, with the friendship between our three heroes being the films driving force.

While it isn’t as action packed as expected, each of the films fight scenes are well done, being mostly grounded in reality. The fights aren’t overly flashy but are entirely fitting with the overall tone of the film.

Choreographed by co-star Ken Quitugua, they give each of the performers a chance to show off their skills but not to the detriment of the plot. The fights serve a purpose rather than just to show off how much of a bad ass its lead actor is.

A great deal of the success of The Paper Tigers is down to its cast. The majority of Alain Uy’s filmography is made up of supporting roles. He is given a rare leading role here and he doesn’t dissapoint. Uy has an everyman quality that serves the character of Danny well. He manages to make his character likeable even though it’s clear he’s not perfect. Uy applies himself well in his fight scenes, with the standout being his standoff against Quitugua.

Mykel Shannon Jenkins is probably best known to martial arts cinema fans for his co-starring role in Undisputed III: Redemption (2010), where he shared the screen with action legend Scott Adkins. He has been consistently working since then but it has mostly been in DTV movies or television shows. Thankfully his role in The Paper Tigers is more worthy of his talents.

Ron Yuan is the true heart of the film, with Hing being the one that brings the three back together. He seems genuinely happy just to have his friends back. Yuan is involved in some of the films funniest moments, with his god awful wig creating a number of great sight gags. As comical as Hing appears, he is still the most honorable of the three, with him later willing to face off against the films main villain even though he is clearly no match for him.

Yuan has been working in action movies both in front and behind the camera since the early 90’s. With his character’s bad knee, Yuan is limited in the moves he can pull off during the fight scenes. He still impresses, especially during a fight in a drained pool where he, Uy and Jenkins taking on three young thugs. Yuan uses his size to his advantage showing some definite power behind his moves.

Another element that makes this fight standout is the inclusion of Andy and Brian Le from Martial Club as two of the thugs, with Wushu champion Phillip Dang of 102 Productions portraying the third.

It’s also nice to see Yuan’s older brother Roger appear as his character’s master, even if they don’t share any scenes. Both of the brothers can also be seen in the upcoming Mulan (2020).

Away from the leads, Matthew Page is a real scene stealer. The character of Carter and his so-called Chinese wisdom is hilarious. He is clearly no slouch in the martial arts department either. During the opening credits we see how our heroes constantly belittled Carter, something that comes back to bite them in the present.

Fight choreographer Ken Quitugua shows up in the latter part of the film to put our heroes through their paces. He shows he is a force to be reckoned with. It was nice to see Quitugua in front of the camera again after his stellar work in Unlucky Stars (2015). This isn’t his first collaboration with Tran Quoc Bao, with him acting and working as fight choreographer on Bao’s short film Bookie (2008).

Producer Yuji Okumoto additionally makes a small appearance as a waiter. Okumoto needs no introduction, with him being instantly recognizable from his role as Chozen in Karate Kid Part II (1986).

The Paper Tigers was a delight from beginning to end and shows what can be achieved with limited resources but a great deal of dedication. Clearly a labour of love from Tran Quoc Bao, it will work as a calling card for the talented director and hopefully lead to higher profile roles for its cast.