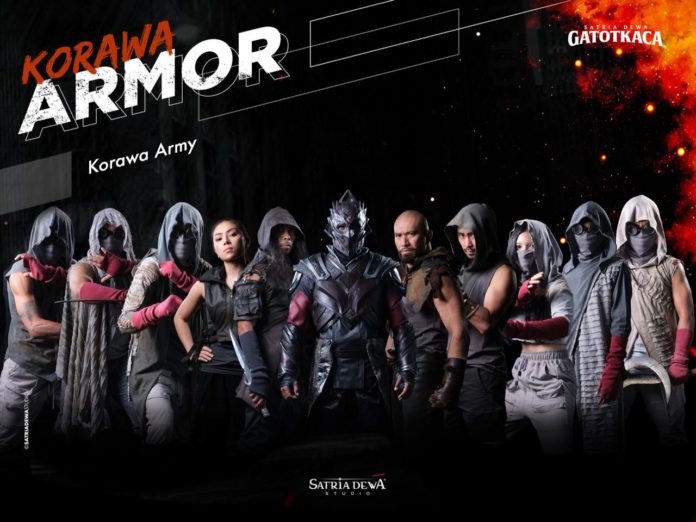 Indonesia is about to step into the superhero genre with The Raid franchise breakout stars Yayan Ruhian and Cecep-Arif Rahman (John Wick: Chapter 3) leading the charge.

Production has begun on Satria Dewa: Gatotkaca, the first in an ambitious 8 film series in the “Satria Dewa Superhero Universe.”

The film is set in “a universe that is rich with Indonesian tradition and culture, but reinvented with a present-day timeline for a modern day audience both in Indonesia and around the world.”

With a script by Rahabi Mandra (Night Bus) and Director Hanung Bramantyo (Brownies) at the helm, the project also features Indonesian star Rizky Nazar (Danur 3) as “Yuda, a young man whose life changes in a way that he could never have believed when he finds himself unwillingly gifted with super powers and the revelation his destiny is to save the world from gangsters and those that control them and plan to plunge the world into chaos.”

Leeder stated, “I have always had a love for Indonesian film. Big fan of the old Barry Prima Jaka Sembung/The Warrior films and of course Billy Chong/Willy Dozen and his movies. When I first came to Hong Kong, I was introduced to a stuntman and coordinator from Indonesia, the late Alip Sak who became my godfather. Alip Sak was a veteran of both the Hong Kong and Indonesian Film & TV industry. I worked with him on a number of projects including the TV series Dara Dai Cinta with Ari Wibowo and Willy Dozen/Billy Chong, as well as multiple projects in Hong Kong. I got to work with Gareth Evans, Iko Uwaias and Yayan on The Raid 2, and it’s great to be able to work with visionary Producer Rene Ishak and his team at Satria Dewa Studios to introduce the world to a whole new universe of Indonesian superheroes.”

Check out the character reveal Teaser Trailer below!

Satria Dewa: Gatotkaca is set for release in Indonesia Summer 2021.