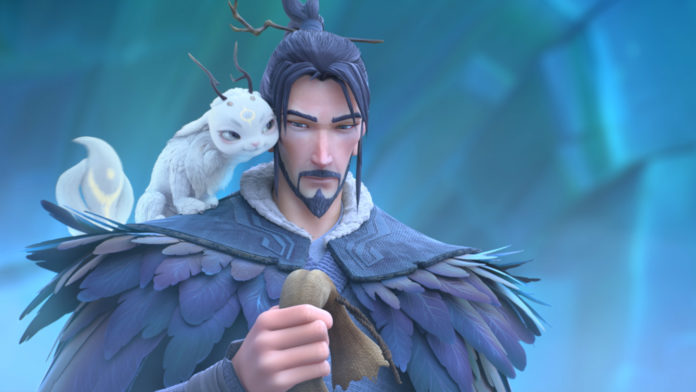 Released last year to critical acclaim, the animated fantasy Ne Zha (2019) quickly went on to become a record breaker. Not only did it become the highest grossing animated film in China but the 2nd highest grossing non-English language film in the world.

Considering this, it is no surprise a sequel quickly followed. Forming the second chapter in the Fengshen Cinematic Universe, Jiang Ziya: Legend of Deification was originally planned to be released in January of this year, but like so many films in 2020 it was put back due to the ongoing Covid-19 pandemic.

Thanks to the good people at Well Go USA, Jiang Ziya is finally coming to cinema screens this October, where its mixture of fantasy and adventure should please the majority of genre fans.

Viewers of the first film may remember the introduction of Jiang Ziya during the post credit sequence of Ne Zha, and it is his character that forms the basis of the plot this time around.

Opening the film in a more hand drawn animation style, we are told of the exploits of Jiang Ziya, who during a famous battle led an army of special powered warriors to overthrow the Shang Kingdom and take down the evil nine tailed fox demon.

After his victory Jiang was all set to become the leader of the Gods. All that stands in his way is the nine tailed fox demon who he has been ordered to execute. Just before he is about to carry this out he is shown that the demon’s life is tethered to that of an innocent child. With this he disobeys heaven’s orders and spares the life of the demon in order to save the child.

These actions result in Jiang’s banishment from heaven to earth, where he spends the next ten years reflecting on his actions. He is finally given a chance to find out the truth and how she became joined to the life of the nine tailed fox demon.

Like its predecessor, Jiang Ziya is based on the famous 16th century novel Investiture of the Gods by Xu Zhonglin. The character was recently portrayed in live action form by martial arts legend Jet Li in the enjoyable but ultimately disappointing League of Gods (2016).

Considering Jiang Ziya is an animated feature, it takes a much more adult approach than that film. Sure, there’s the more fantastical elements we’ve come to expect from these types of films, but Jiang Ziya comes with a bit more dramatic heft than typical U.S. animations.

Original director Jiaozi doesn’t return this time, with Cheng Teng & Li Wei taking over the directing reigns. Fans of the first movie shouldn’t fret however; as Jiang Ziya still contains the same beautiful and vibrant animation the series is already famous for.

Like the first movie, the film eschews famous names amongst its voice cast, instead utilizing talented voice over artists. Although I don’t speak Mandarin, the voice cast all seem to be on point and give their characters the required emotions.

Jiang Ziya contains a fine balance between humour, drama and action, with the action scenes being surprisingly violent in some parts. Lovers of Chinese fantasy movies should know by now what to expect from the action scenes, with characters displaying superhuman powers with very little explanation as to how.

Like some of the best Chinese fantasy movies i.e. Zu Warriors From the Magic Mountain (1983), the plot is somewhat haphazard. Some basic knowledge of Chinese folklore wouldn’t go amiss, but still this shouldn’t in anyway stop your overall enjoyment. Sometimes it’s best just to be taken in for the ride and marvel at the beautiful visuals on show.

Chinese animation has come a long way since the likes of Tsui Hark’s A Chinese Ghost Story: The Animation (1997). The work carried out here is mostly on par with anything Hollywood has to offer, with the character models being particularly distinct. The standout is the nine tailed fox demon, a grotesquely realized creation that is truly a sight to behold.

While Jiang Ziya does include a modicum of violent scenes and contains some more adult themes, parents should still feel comfortable in bringing along older children. The use of subtitles may put some people off but I would urge people to persevere.

Additionally, while Jiang Ziya does have a PG-13 rating, there is nothing here that I would think unsuitable as audiences young and old would find plenty to enjoy from this fantasy spectacular.