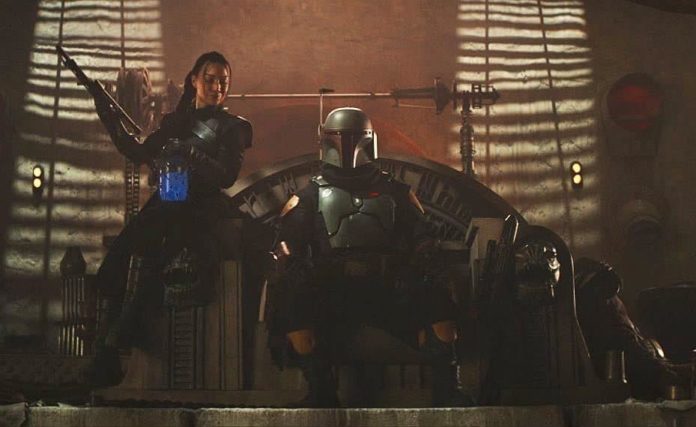 UPDATE: Have a look at the first Trailer for The Book of Boba Fett below!

Synopsis: “The Book of Boba Fett,” a thrilling Star Wars adventure teased in a surprise end-credit sequence following the Season 2 finale of “The Mandalorian,” finds legendary bounty hunter Boba Fett and mercenary Fennec Shand navigating the galaxy’s underworld when they return to the sands of Tatooine to stake their claim on the territory once ruled by Jabba the Hutt and his crime syndicate.

UPDATE: The Book of Boba Fett is set to premiere on Disney+ December 29th.

A new series focusing on the fan-favorite Star Wars character Boba Fett is officially coming in the form of The Book of Boba Fett.

During the post-credit sequences in the Season 2 finale of The Mandalorian that began streaming last night, it was confirmed that The Book of Boba Fett is set to premiere in December 2021 on Disney+.

If you fast-forward past the credits sequence in The Mandalorian finale we see Return of the Jedi character Bib Fortuna, Jabba The Hutt’s right-hand man, sitting on his throne in the old palace. Fennec, played by Ming-Na Wen, enters and takes down most of the creatures around him, and shooting the shackles off the blue slave dancer. Then Boba enters to Bib’s surprise, “Boba, I thought you were dead!” Boba then shoots him square in the chest and takes the throne at Jabba’s palace.

Temuera Morrison is expected to return as Boba Fett in the new series.