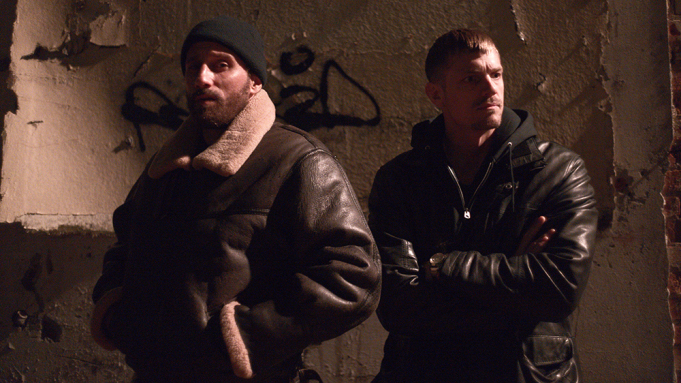 Michael on the other hand shows no sense of guilt, putting aside personal feelings and friendship in order to show his authority. The only person he does show any sense of affection for is Peter, and even this is strained. It is clear from the start that Peter doesn’t trust his cousin but still feels responsible for him.

After an attempt is made on Michael’s life, he makes it clear that he wants to retaliate. Even when Peter tries to make him rethink his decision stating that it could lead to an all out gang war, Michael is oblivious with his quest for power overshadowing any fear of the consequences.

During this Peter seems to have a hope at redemption, with the return of old friend Grace (Maika Monroe) to the neighbourhood. It seems to be a relationship doomed from the start with Michael unable to distance himself from the criminal lifestyle and always being dragged back in by his connection to cousin Michael.

I had first become aware of director Jérémie Guez when he wrote the Jean Claude Van Damme vehicle Lukas a.k.a. The Bouncer (2018). He also wrote the screenplay for the terrific French thriller Burn Out (2017). Both those films had elements in common, being that they were tightly plotted thrillers with short run times peppered with gritty action scenes.

While Brothers by Blood is also tightly plotted with a short run time, it is solely lacking in action. There is a sense of violence and carnage always bubbling underneath, but the violence this ultimately leads to is short and sharp, very much like real violence would be.

In many ways it is comparable to Guez’s feature length directorial debut, A Bluebird in My Heart (2018). Like that film, Brothers by Blood is more of a character study, with the primary focus being Schoenaerts’ Peter. The majority of the film is told from his point of view.

Unsurprisingly Schoenaerts is terrific in the role. Smoke may find it strange that a Flemish actor be cast as an Irish gangster, but for the most part he gets away with it with his true accent never really becoming apparent. He has proven countless times before in the likes of Blood Ties (2013) and The Drop (2014) that he is able to capably cover his own accent.

The character of Peter is clearly damaged. He appears to have accepted his lot, acting like a dead man walking. The guilt over his sister’s death and ultimately his fathers facilitates everything he does. He isn’t the easiest character to like, with him being ineffectual against his cousin. On a number of occasions you may find yourself shouting at the screen for him to do something, still this is in line with the type of character Peter is.

Kinnaman’s Michael is far removed from what he has played in the past. Scumbag is the first thing that came to mind when watching him. Some of his words and actions are reprehensible, with him clearly being the villain of the film. His relationship with Peter is the crux the film is built upon.

Kinnaman has certainly come into his own in the past few years. After the disappointing Robocop (2014) remake he was able to bounce back with quality roles in television shows Altered Carbon (2018) and Hanna (2019). There was also the quality crime thriller The Informer (2019) which featured one of his best movie roles to date. This and his performance in The Secrets We Keep (2020) shows that he has more range than what many initially assumed.

Maika Monroe in comparison is shortchanged with her role. Considering she is the only main female in the film, she isn’t given a great deal to do. Her role in the film is more to give Peter a sense of hope, even if the audience knows that it is probably unachievable.

Mention should go to Ryan Phillipe who shows up intermittently throughout the film as Peter’s father. This is a father that clearly loves his family but has difficulty showing it. Phillipe is solid here, with even in his limited screen time giving a more worthwhile performance than his last starring vehicle, the dreadful The 2nd (2020).

A series of true life crime photos are used during the opening credits which show the level of crime in the Philadelphia area. These are more just to give the audience a sense of setting as they play no real part in the main plot, with Brothers by Blood being quite a small scale affair. The main story is limited to only a short cast of characters, with their interactions being the main focus rather than the straightforward plot.

There isn’t anything outwardly original in Guez’s script, but he does tell his tale in an interesting way which makes the film worthwhile. His decision to shoot it in a more 1970’s style, favouring long takes over quick cuts with Director of Photography Menno Mans giving the film a suitably bleak look.

Guez has said that he was influenced by the works of Jean Pierre Melville and Louis Malle, which is wholly evident upon viewing the film. His transitions between the present day and past at first can appear to be confusing, but this is clearly done on purpose.

Some action would have been appreciated but it’s clear that’s not the type of film Guez was wanting to make. Ultimately Brothers by Blood won’t change the world, and those looking for an action fest will surely be disappointed. Some slight pacing issues also knock some points off, but there is still a lot to enjoy here especially the two lead performances from Schoenaerts and Kinnaman.