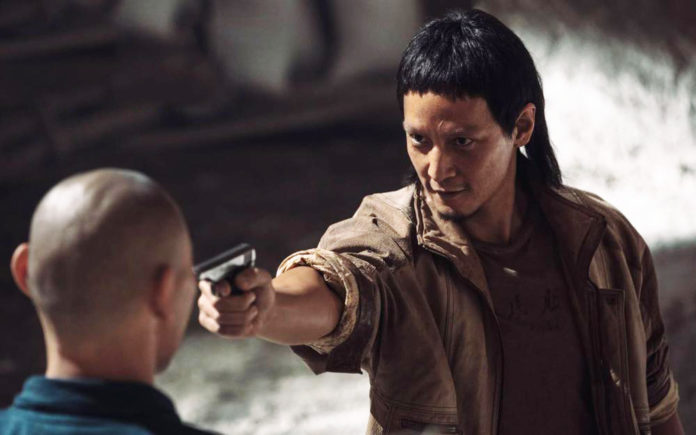 Director Lau Ho-Leung returns to the crime genre once again with his sophomore effort Caught in Time. Unlike his first feature, the comedic Two Thumbs Up (2015), his second time behind the camera forgoes comedy for a deadly serious crime thriller that harkens back to classic Hong Kong cinema, being reminiscent of such greats as Johnny Mak’s Long Arm of the Law (1984) and Ringo Lam’s City on Fire (1987).

Similar to the more recent Chasing the Dragon (2017), Caught in Time’s plot is ripped straight from the headlines, based on the true story of robber and murderer Zhang Jun (Daniel Wu). The real life Zhang went on to rob 22 stores whilst murdering 28 people and wounding many more.

The film opens when Zhang and his gang are midway through their crime spree. Signaling out banks and jewelry stores they have carried out numerous robberies, with the death toll quickly rising. With this comes the arrival of Captain Zhong (Wang Qianyuan), who on his first day in Chongqing comes into contact with Zhang and his gang during a robbery. Zhong ends up becoming the gang’s hostage who they end up throwing out of their getaway car, but not before Zhong bites a chunk from Zhang’s ear.

As all of the gang were wearing masks it is near impossible to identify them, with the missing piece of Zhang Jun’s ear being the only thing to go by. This makes Captain Zhong’s case increasingly difficult with the robbers proving to be extremely elusive, with years passing before the emergence of a new lead makes their capture attainable. Even then Captain Zhong and his team are going to have a fight on their hands to bring Zhang Jun and his fellow robbers to justice.

Although the real life case works as the basis of the film, Ho-Leung does take a certain amount of dramatic licence when adapting it for the screen. Daniel Wu’s version of Zhang Jun is more fictionalized than his real life counterpart and Wang Qianyuan’s determined cop is a composite of a number of detectives who worked on the case.

Still, with a career made up of writing scripts for the likes of Derek Yee, Johnnie To and Dante Lam, it is no surprise that Ho-Leung is able to construct a compelling script that actually gives his cast something to chew on, unlike many action thrillers that forgo character work and plot for spectacle.

Ho-Leung does a fair job of recreating the excitement of those great HK crime thrillers of the 80’s and 90’s, keeping things moving at a brisk pace while interjecting the drama with some brutal shootouts choreographed by Johnny Tang Shui-Wa.

Tang Shui-Wa may not be as prolific as some of his fellow Chinese action choreographers, ala Yuen Woo Ping or Ching Siu Tung, but his action scenes are expertly carried out, with him and Ho-Leung bringing a rawness and authenticity to the action.

The action isn’t only restricted to gunplay. A showdown between Wu and Qianyuan in a bathhouse being brutally effective, with every slam of their bodies on the cold hard tiles being truly felt.

Fans of Wu’s more stylized martial arts that he has shown off in Into the Badlands (2015) may be slightly disappointed as the fighting here is more sloppy, lacking the finesse that he normally displays. This approach to the hand to hand fighting gives it a sense of urgency and desperation which is totally in line within the context of the film.

The one area that stops it from becoming a perfect recreation of classic Hong Kong cinema is the lack of a moral grey area, with our heroes and villains being clearly cut out. A HK film of the past would have seriously blurred the lines between hero and villain, something that this production is unable to do.

Of course this is partly to do with Caught in Time being a Mainland China production, with Ho-Leung clearly having to appease the guidelines laid out by the CCP. There are also some intrusive inclusions which really stand out. One scene has Qianyuan angrily tearing down flyers that are blocking police propaganda posters while there is also the inclusion of an end title card that boasts of Mainland China’s crime-free society.

Even with this in mind, Ho-Leung has done a terrific job of telling a compelling crime story and pushes the boundaries as far as he can. Additionally, even though it is clear who the bad guys are, he is able to give them enough character to make them at least seem human, which is most apparent with Zhang.

It does help that he has two magnificent leads in Daniel Wu and Wang Qianyuan. Anyone familiar with Qianyuan’s work in the recent The Guilty Ones (2019) will know that he can do a role like Captain Zhong in his sleep. While Captain Zhong is sadly lacking in backstory, Qianyuan still brings his A game as the dogged cop on Zhang Jun’s trail, imbuing the character with more than Ho-Leung’s script provides.

As great as Qianyuan is, the film is stolen by Wu, who gives one of the best performances of his career. Sporting the haircut from hell, Wu’s take on the villainous Zhang is extremely charismatic. His work here is on par with my personal favourite of his performances, the excellent One Nite in Mongkok (2004) from director Derek Yee.

Clearly Zhang Jun is the bad guy of the piece, with him putting little value on human life, Wu is still careful to play Zhang on the right side of crazy, never mistakenly stepping into pantomime villain territory.

His character sometimes appears as a contradiction, with him at once being coldly ruthless when it comes to human life but at the same time showing a tenderness towards his girlfriend Wen Juan (Jessie Li).

Michelle Wai also manages to make an impression in a less developed role as a tough female police officer who backs up Captain Zhong in his investigation. Like Qianyuan and Wu, she too gets in on a fair share of the action.

The success of Caught in Time has led to the announcement of a sequel. Caught in Time 2 will feature the same lead actors with Lau Ho-Leung currently working on the script. At the moment it is unclear what the film will be about but I am assuming that it will be a thematic sequel with little to do with the original other than being based on a true crime case. Either way I look forward to what the filmmakers bring to the table.

For Daniel Wu fans, he can next be seen in the upcoming sci-fi thriller Reminiscence (2021) which finds him sharing the screen with Hugh Jackman, Thandiwe Newton and Rebecca Ferguson to name a few.

Ultimately Caught in Time is able to overcome a number of obstacles with director Lau Ho-Leung keeping proceedings relentlessly paced so that you won’t have time to think about them. A well made crime thriller, it will definitely find an audience amongst action fans especially those clamouring for the glory days of Hong Kong cinema.