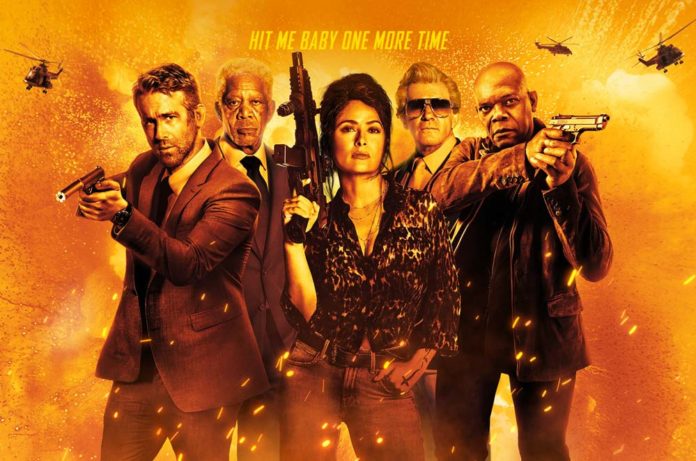 I must say that I never expected there to be a sequel to The Hitman’s Bodyguard (2017) as it didn’t exactly set the world alight critically. Personally I found it to be a perfectly serviceable action comedy that harkened back to the great buddy movies of the 80’s and 90’s.

Clearly it must have done well enough financially for Millennium films to greenlight a sequel, with The Hitman’s Wife’s Bodyguard bringing back the main principles from the first film with Ryan Reynolds and Samuel L Jackson once again starring as the bickering duo at the heart of the film and Salma Hayek tagging along in a more substantial role than she was given first time around.

Now, many critics online have complained that this entry in the series is worse than the last, with a stronger focus on crazy comedy than action. I don’t know what film they were watching as the sequel serves up another well done combination of exciting action scenes peppered with low brow comedy, pretty much in line with the original film.

Sure the film has its issues (like most Millennium productions), but these don’t ruin what is a fun time at the movies. Perhaps some reviewers have gone in expecting too much whereas I knew exactly what I would get from a film of this ilk.

The film opens with Michael Bryce (Ryan Reynolds) visiting his therapist. It turns out that things haven’t been going that great for Bryce since his last outing. His triple A rating has been stripped due to him saving hitman Darius Kincaid (Samuel L Jackson), and it seems unlikely it is going to be returned.

Bryce’s therapist encourages him to relax, suggesting he takes a sabbatical in Capri. All is going fine until his vacation is interrupted by Sonia Kincaid (Salma Hayek) who is in the midst of a firefight. Sonia has sought out Bryce as she needs his help to rescue her husband Darius after he has been kidnapped by a gang of mobsters.

Although they are able to rescue Darius, they end up being captured by Interpol agent Bobby O Neill (Frank Grillo) who coerces them into helping him stop Greek billionaire Aristotle Papadopoulos (Antonio Banderas) from destroying the European power grid, as Papadopoulos believes this will make Greece great again.

In order to stop Papadopoulos, Bryce, Darius and Sonia will have to put their issues aside, which gets increasingly difficult the longer they spend together.

Patrick Hughes is once again in the directing chair, making this his third Millennium film in a row after Expendables 3 (2014) and The Hitman’s Bodyguard. As shown in the first film, Hughes knows how to keep the pace moving, clearly recognising what type of film he is making.

There is a good balance between action and comedy, and although not all the jokes hit their mark, Hughes is able to rely on the star power and chemistry of his talented cast to overcome any script issues.

Some online reviews have complained that the action is poor, but for the most part it is well done, with no shortage of shootouts, fight scenes and car chases. Hughes has taken advantage of the R rating, as I lost count of the number of gory headshots during the action. Thankfully he didn’t decide to go down the shaky cam route with the majority of the action being clearly shot. On a few occasions the stunt doubling is noticeable, but mostly Hughes manages to cover this up.

Hughes is also able to overcome the cost cutting inherent of most Millennium productions, with many green screen being used throughout to cover for the fact that his leads were not on location. The first film had this same issue. It was quite noticeable in a number of scenes but it is to be expected with this type of production.

Scriptwriter Tom O’ Connor returns from the first film, this time joined by fellow writers Brandon and Phillip Murphy. If anything, having another two writers has just made this entry more crazy than before. Anyone looking for logic won’t find it here, as The Hitman’s Wife’s Bodyguard is even sillier than the last. However, it appears this is by design rather than a mistake.

Reminiscent of classic Cannon productions, the plot is completely ludicrous. I find it hilarious in this day and age that filmmakers still don’t seem to understand how computers work, where you have characters constantly tapping away on keyboards just to go on the internet. I don’t know about you, but I would just use my mouse or touchpad.

Or like here where they have a drill where by plugging in a USB drive to a laptop enables it to transfer a virus to the drill that will destabilize the entire European power grid and infrastructure. Any other film and my eyes would be rolling, but here I thought it just added to the overall tone of the film. I have seen some online reviews complain about how illogical this film is but will give the new Fast and the Furious film a pass, even when each of those films gets more ridiculous than the last.

Both Reynolds and Jackson work well together, although Jackson gets less to do in comparison to the first film. Still, for a man of 72 he still gets in on a great deal of the action, with him still being totally convincing as a total badass. Reynolds’ role is tailored to his strengths, with it being mostly played for laughs, but like Jackson still gets a chance to show off his action credentials.

Salma Hayek has a blast as the foul mouthed Sonia. Almost stealing the film from Reynolds and Jackson. She also gets to take part in a great deal of the action, the most impressive being a nightclub shootout, where she and Reynolds have to fight off a plethora of gangsters, all the time with Hayek having a bomb strapped to her wrist.

The fact that Hayek’s Sonia is trying to start a family with Darius is mostly played for laughs. It does come across as quite improbable considering that Hayek is now a woman in her fifties. This is a fact that seems to elude her, with her character going berserk when someone mentioned her age. Admittedly, it is hard to believe Hayek’s age as she is still absolutely stunning.

It was nice seeing Frank Grillo in a theatrical release, even if I was disappointed that he didn’t get in on the action. He still manages to have some fun. Partnered with Scottish interpreter Ailso (Alice McMillan), he gets to throw in some derogatory one liners at her expense. It’s good to know that in this day and age of political correctness, jokes about the Scots are still fair game.

Rounding out the main cast is Antonio Banderas and Morgan Freeman. Banderas has fun chewing the scenery as Greek Millionaire Papadopoulos. Sure, it may seem strange having a famous Spanish actor portray a Greek tycoon, especially when he doesn’t even try covering his accent, but Banderas makes for an enjoyable villain. I was glad that they had him share some scenes with Hayek, with the two of them bringing back memories of the classic Desperado (1995).

In regards to Freeman, he comes late in the proceedings, and as always, adds a bit of gravitas to the production. Some humour is mined from the fact he is Reynold’s father in the film, with Jackson’s expression upon his entrance being hilarious. Patrick Hughes should also be commended that he is able to make Freeman a realistic threat during his own action scenes, with the 84 year old actor appearing quite spry.

Perhaps I viewed The Hitman’s Wife’s Bodyguard through rose tinted glasses, as it is the first film I have seen theatrically in almost a year, but for the most part I can’t understand the critical drudging it has received. Sure it is no masterpiece, nor was it ever meant to be, but for a fun, brainless action movie you could certainly do a lot worse.

While the ending leaves things open for a sequel, the current Covid-19 pandemic may restrict the possibility of the movie making a profit. Still, I never thought the first film performed well enough to garber a sequel so you never know.

Reynolds doesn’t need to worry though, with him already having another two films in the can ready for release. Free Guy (2021) has already been pushed back 3 times but is apparently due this August. Additionally there is action comedy Red Notice (2021) which will be coming to Netflix nearer the end of the year.

Like Reynolds, Patrick Hughes also has a film due for release, The Man From Toronto (2022), which unsurprisingly has been delayed due to Covid-19. Another action comedy, it is scheduled for release at the start of 2022.