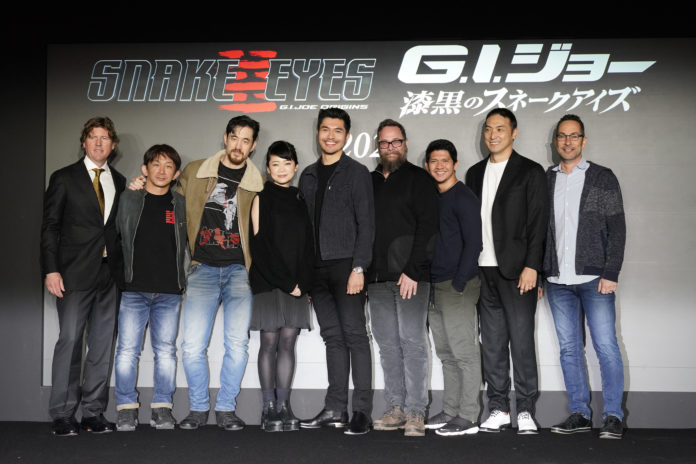 UPDATE: Like every other upcoming tentpole film, Snake Eyes has unsurprisingly pushed back its release date. Previously scheduled to open in October 2020, it is now set for release on October 22, 2021.

…and THAT, is a principal wrap on Snake Eyes lady’s and gents ❤️🐍 What a crew we had, Vancouver + Japan, you were unstoppable. Thank you for the dedication, this film is going to blow everyone’s socks off x

UPDATE: Kenji Tanigaki (Enter The Fat Dragon) will be bringing his talents onto Snake Eyes as the film’s stunt coordinator. Best known for being part of martial arts superstar Donnie Yen’s stunt team, he has worked on such action classics as SPL and Flashpoint.

As seen in the image above, Tanigaki recently joined Exective Producers Erik Howsam, Jeff Waxman and Director Robert Schwentke along with stars Andrew Koji, Haruka Abe, Henry Golding, Iko Uwais, and Takehiro Hira to attend the Snake Eyes start of Production in Japan event at the Hie-Jinja Shrine on January 10, 2020 in Tokyo, Japan.

UPDATE: Casting continues as Samara Weaving (Ready Or Not) is set to play counter-intelligence officer Scarlett. Scarlett is best known for using the crossbows as her weapon of choice.

UPDATE: Actress Haruka Abe (47 Ronin) has joined the cast of Snake Eyes in an undisclosed role.

UPDATE: According to The Wraps, actress Ursula Corbero (Money Heist) has been cast as none other than Baroness, the Cobra’s intelligence officer and lieutenant to Cobra Commander.

UPDATE: Martial arts star Iko Uwais (The Raid, Netflix’s Wu Assassins) is in talks to join the cast of Snake Eyes. Uwais will portray Hard Master, who is described as “a tough as nails teacher who instructs Snake Eyes and also happens to be a skilled swordmaster.”

Previously played by Korean superstar Byung-Hun Lee in 2009’s G.I. Joe: The Rise Of Cobra and 2013’s G.I. Joe: Retaliation, Storm Shadow is Snake Eyes’ old blood brother, in addition to the latest in a long family line of ninja assassins who eventually switches sides and became his greatest enemy.

UPDATE: According to The Hollywood Reporter Crazy Rich Asian star Henry Golding is in final talks to take the lead in Snake Eyes.

Also known for his stunt work on Deadpool and Deadpool 2, Smith will begin work on Snake Eyes this October in Vancouver, British Columbia, Canada.

UPDATE: Plot details has leaked (via That Hashtag Show) revealing that the spin-off prequel will follow a younger ‘Snake Eye’ “as a street fighter in Peru. Driven by the desire to avenge the death of his father, Snake Eyes is apparently a man on the move until he ends up in Japan, where he and his best friend, Tommy, aka Storm Shadow, will begin their training with the Arashikage Clan. The film will see at least 3 of the clan’s legendary masters as they train Snake Eyes and Storm Shadow as Hard Master, Soft Master and Blind Master are all set to appear. Also present at the Arashikage compound is the film’s female lead, Akita. In comic continuity, Junko Akita was an apprentice and lover of Storm Shadow; here she is the head of security and will be a love interest for Snake Eyes.

Of course if it’s a GI Joe movie, Cobra must somehow be present and in this instance their presence is made manifest in what appears to be a character created for the film: Kenta. Kenta is revealed to Storm Shadow’s brother who has long since left his family, the Arashikage, and joined with a rival ninja clan, the Kurayami. It is Kenta who attempts to lure Snake Eyes away from the Arashikage and into a terrorist plot being devised by Cobra. We won’t delve too deeply into spoiler territory here, but we can see what side of things Snake Eyes and Storm Shadow will take and this film certainly seems to set the stage for one of the great comic book rivalries.”

UPDATE: Producer Lorenzo DiBonaventura recently spoke to SLASH FILM and revealed that Ray Park (G.I. Joe, Accident Man) will not be returning as ‘Snake Eyes’ stating it is “because we are going to the origin story. As you know in the comic book, you saw his face. And it is, I’ll say, the formation of a hero. So you’ve got to see somebody and it can’t be Ray’s age, unfortunately.”

Park at 44 years old is still physically fit, but is unfortunately not ideal for a younger ‘Snake Eyes’ in an origin story.

Who would you cast as a young silent ninja? Comment below.

UPDATE: Paramount has their eyes on director Robert Schwentke (The Captain), who is in final talks to helm Snake Eyes. Schwentke is best known for launching the action franchise ‘Red’ starring ‘G.I. Joe’ alum Bruce Willis, the sci-fi actioner ‘R.I.P.D.’, and the second and third installment of the ‘Divergence’ series, ‘Insurgent’ and ‘Allegiant’.

With recent news that a third installment of Hasbros’ ‘G.I. Joe’ franchise is on the way, Paramount Pictures is looking to expand the universe with a spin-off film featuring the fan-favorite ninja commando Snake Eyes.

Evan Spiliotopoulos (Beauty and the Beast, The Huntsman: Winter’s War) is set to pen the script with Brian Goldner producing.

For those unfamiliar with the character, ‘Snake Eyes’ is a silent ninja who is an original member of the G.I. Joe Team, and is most known for his relationships with ‘Scarlett’ and his arch-nemesis ‘Storm Shadow’ played by Korean superstar Byung Hun Lee in the first two films.

There is no annoucement yet on weather or not martial arts star Ray Park (Accident Man) will return as ‘Snake Eyes’.