UPDATE: Check out the U.S. trailer for ASSASSINATION which is getting a limited release by WELL GO USA on August 7th, 2015!

Head on over to THIS LINK for showtime and location. 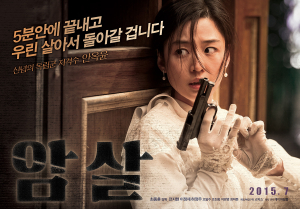 The film will see Jun re-unite with ‘The Thieves’ director CHOI DONG-HOON and co-stars LEE JUNG-JAE and OH DAL-SU.

‘Assassination’ is set in China and Korea during the 1930s, when the peninsula was a colony of Japan. Jun’s character is part of “a group of killers assembled by Korea’s resistance fighters, whose mission is to wipe out targets supporting the Japanese occupation.”

From Bruce Lee’s FIST OF FURY aka THE CHINESE CONNECTION to Donnie Yen’s IP MAN, we have all seen a number of films with the ‘vs Japanese occupation’ theme. Lets hope ‘Assassination’ gives us a fresher take.