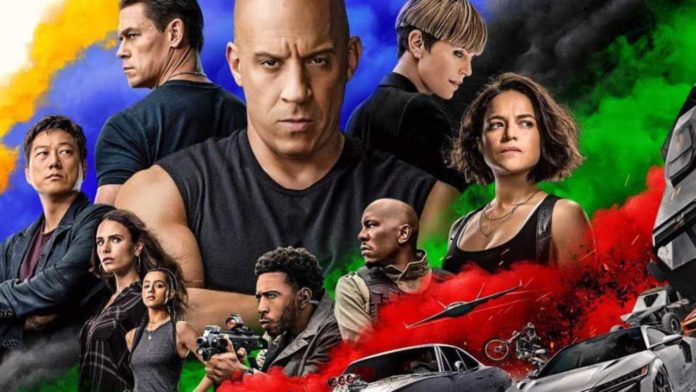 Back when I reviewed Fast and Furious Presents: Hobbs & Shaw (2019) I had commented on the upcoming F9: The Fast Saga as if it was just around the corner. Unbeknownst to me (and everyone else for that matter) that its release would be put back numerous times due to Covid, with Fast fans finally getting a chance to see the finished product this summer.

In my Hobbs and Shaw review I had spoken of my interest in the return of Justin Lin to the director’s chair having sat parts 7 and 8 out, with James Wan taking over for the troubled production of Furious 7 (2015) whilst F. Gary Gray stepped in for part eight in the franchise The Fate of the Furious (2017).

Even with their behind the scenes issues, both films turned out to be wonderfully entertaining entries in the franchise, with both directors doing a great job in mirroring the style that Justin Lin had laid out for the franchise with Fast Five (2011), where they intentionally moved the series away from street racing into more Mission Impossible styled action.

Having retired from saving the world, Dominic Terretto (Vin Diesel) is living the quiet life with his wife Letty (Michelle Rodriguez) and son Brian. It isn’t long before their tranquil existence is disturbed by the emergence of old friends Roman (Tyrese Gibson), Tej (Chris Bridges) and Ramsey (Nathalie Emmanuel), who inform them that Mr. Nobody (Kurt Russell) eventually managed to capture Cipher (Charlize Theron) only for their plane to crash somewhere in Central America.

Roman, Tej and Ramsey want Dom and Letty’s help in trying to find the downed plane. Dom is at first apprehensive about returning to action but finally reneges. Upon locating the plane they find onboard half of a device named Aries which has the capability of hacking any computer weapons systems in the world.

Only minutes after retrieving Aries, our heroes find themselves being set upon by a private army led by Jakob (John Cena), Dom’s estranged brother. It turns out Jakob is working in league with spoiled Billionaire Otto (Thue Ersted Rasmussen), with the two looking to retrieve the other half of Aries which has been located in Edinburgh, Scotland.

Now it’s up to Dom and his team to try and stop Jakob before it’s too late. Luckily for them they may have some unexpected help from a familiar face.

Having established the overall style of the series I wondered what else Lin could bring to the table. My main question was, can he top what has come before. I must say he certainly gives it a good try but F9 ultimately turns out to be one of the series’ weaker entities. Overall the film is still a lot of fun (sometimes in spite of itself), but it seems to be missing a lot of the ingredients that have made other Fast movies so enjoyable.

One of the major problems the film is unable to overcome is the absence of both Dwayne Johnson and Jason Statham, the two becoming major factors in the ongoing success of the franchise, even if Vin Diesel would disagree. Their non-appearance is felt throughout the film, with the new inclusion of John Cena only marginally making up for it.

Johnson and Statham aren’t the only ones missing in action, with this being the first entry of the series since 2 Fast 2 Furious (2003) to not be written by Chris Morgan. Now, many may criticise the quality of Morgan’s writing but he has always managed to bring a sense of fun and humour to proceedings, something that I thought was mostly missing in F9.

Other than an typically amusing turn from Tyrese Gibson, the film is mostly devoid of humour other than a few one liners here and there. I must say, it is admirable how straight faced the cast are able to play out proceedings, but considering that this is probably the most ridiculous entry of the series to date I was surprised how po faced it seems.

Justin Lin and Daniel Casey’s script feels like paint by numbers, only serving to get characters to the next action scene. While it was nice to get Sung Kang’s Han back, the explanation behind his return was ridiculous. They are now retconning a retcon.

They additionally add a good deal of flashbacks to explain the troubled history of Dom and Jakob, with Vinnie Bennett and Finn Cole portraying the younger iterations of the characters. While it is nice to be given a bit of background, their insertion does slow up the action. However these scenes do include the awesome Michael Rooker so they aren’t all bad.

I also wasn’t a fan of how they treat the Brian O’ Conner character in the film. I understand they want to keep the character alive and think that this is the best way to respect the late Paul Walker, but in many ways I feel they are actually doing him a disservice. Are we truly meant to believe the character that Walker played would let his wife and best friend go away to try and save the world while he stays at home and watches the kids.

At least the action is on point, with Lin showing that he certainly hasn’t lost his skill for large scale destruction. Like previous entries, the action takes place all over the globe, ranging from Central America, Tokyo and even Edinburgh. While the series has shot in Scotland many times, I think this may be the first time that it has actually been set there. I must say I did get a chuckle out of the stereotypical Scottish accents on display.

The opening chase scene where our heroes are chased through a minefield in Central America is the kind of grand scale action sequence many productions would save for their finale. As expected the action defies all laws of gravity with cars swinging off rope bridges or being picked up mid air by high powered magnets.

The only issue with the action is that it has become so fantastical and over the top that it somewhat robs it of any sense of peril. There is an ongoing gag throughout the film where Tyrese Gibson’s Roman questions if they actually are actually invincible as they all manage to survive life threatening ordeals with not even a scratch.

This is becoming a major issue with the franchise as a whole, as everyone appears superhuman, with them even returning characters from the dead. Nothing is finite in the series which makes it increasingly hard to care about the outcome as we know our heroes will survive and even if they don’t a small retcon in the sequel will correct that.

As expected, Vin Diesel’s Dom is still the focal point of the film, with Dom still going on about the importance of family even though he seems to have forgotten to mention he had a brother. A brother that must be said has good reason for disliking him.

I was surprised during the first half of the film how little physical action Diesel seemed to be taking part in, with him mostly sitting behind the wheel of a car. Even when he does finally get out from behind the wheel, his face off with Cena appears as if a good deal of stunt doubling and CGI was at play.

Going by Diesel’s own comments as well as others, it seems that this series has become something of a vanity project for him, with Dom becoming almost godlike, displaying the strength of Hercules. Diesel would like us to believe that he could pose as a possible threat to someone the size of Cena, and for the most part Lin makes the audience believe it too.

The fight between them is well staged, with them punching and throwing each other through walls and furniture, but it is disappointingly short and pales in comparison to the fight Diesel had with Dwayne Johnson in Fast Five.

Cena makes for a decent foil, with his similar acting style making it easier to swallow that he and Diesel are actually related. As expected he gets in on a fair amount of the action, with his standout being a one on one fight with man mountain Martyn Ford.

I did find it hard to swallow that Finn Cole was meant to be Jakob in his younger years. While there was no fault in Cole’s acting, I couldn’t see how this diminutive 20 something was meant to become the towering Cena.

Without the presence of Johnson or Statham, a lot more of the action is given to Michelle Rodriguez and Jordanna Brewster, with them having one of the film’s best fight scenes, taking on a number of gangsters in a Tokyo apartment. They are ably assisted by franchise newcomer Anna Sawai’s Elle who plays a more important part than initially anticipated.

As mentioned, Tyrese Gibson gives an amusing performance, with Roman essentially becoming the comic relief of the series. He works well alongside Chris Bridges and Nathalie Emmanuel who he shares the majority of his scenes with.

I did find it funny when in Edinburgh the derogatory comments Gibson levied at the place and its people. Like the recently released The Hitman’s Wife’s Bodyguard (2021) it would appear it’s perfectly acceptable to be xenophobic against Scottish people.

It was nice seeing Lucas Black, Jason Tobin and Bow Wow reprising their roles from Tokyo Drift (2006) even if they aren’t exactly given much to do. Maybe there are plans for them further down the line in the upcoming sequels.

Kurt Russell and Helen Mirren also return, but their roles are essentially extended cameos. The same is true for Charlize Theron’s returning Cipher, who is treated like Hannibal Lecter by being locked in a glass cage for her handful of scenes.

Clearly there are bigger plans for Theron’s character moving forward, with her being a much more interesting villain than Thue Ersted Rasmussen’s forgettable Otto, with him pretty much playing the same disposable villain type that Joaquim de Almeida and Djimon Honsou have played in previous entries.

Ultimately I think most Fast fans will still get a lot of enjoyment out of this latest installment, even if it isn’t the best the series has to offer. On the plus side, it is one of the first blockbuster films of the summer, one which people can actually see in the cinema which should at least be celebrated,

Make sure to stay for the expected mid credits sequence which helps set in motion a possible plot point of the already planned part 10. I look forward to seeing how this develops.