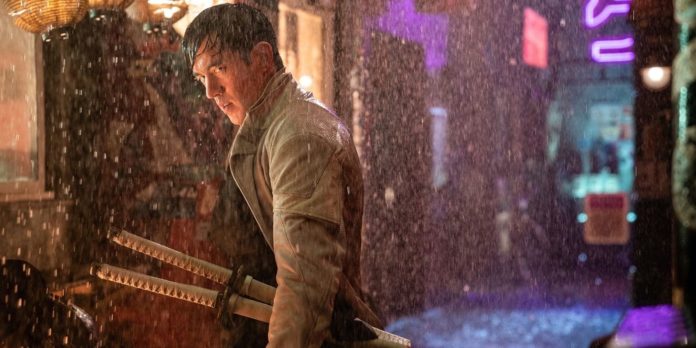 MAAC: First of all, you did an excellent job as Storm Shadow man. Awesome!

MAAC: Oh yeah! I love G.I. Joe and Storm Shadow is one of my favorite actually.

Andrew Koji: Are you happy? Do you think I’ve done him justice?

MAAC: You did an awesome job! Excellent.

MAAC: So we all know Storm Shadow was previously played by Byung-hun Lee in the last couple G.I. Joe films. What was it like to take on this role and how did you try to make it different from Lee’s performance?

Andrew Koji: A lot of this is about rebooting, reinventing. So I didn’t look at his performances because I didn’t want him to be influenced. I just went from the ground up, man. I just went from doing all my homework that I could, you know, and (Director) Robert Schwentke was advocating for studying Japanese cinema, films and performances. I went back to the Kurosawa’s and before that, the old ninja films that they made back in the day. So I wanted to start from the ground up and just really go “Who is this guy?”

Then a lot of it was talking to fans. I’ve managed to find one, James Liao who is an avid fan in particular. And he loved Storm Shadow and I just remember talking to him. I just voice recorded him. And I was going “Tell me what you think he’s feeling in this scene” and “What do you think he’s feeling and saying in this part?” As he was explaining to me, he almost became Storm Shadow himself. Some of that dialogue ended up in the final film. So it was more about treating it like any other character. Do your homework. Prepare. And then I tried to attack this one from all angles, really. So yeah, I gotta make sure it’s right.

MAAC: Can you tell us about your experience working with action choreographer Kenji Tanigaki? All the fans recognize him from his work with the legendary Donnie Yen. What was it like to work with Kenji on this film?

Andrew Koji: Yeah, Kenji is a lovely, lovely, funny, dude. He’s always on. I think during filming in Mammoth studios in Vancouver, he’d always be on those Segway things. He would be zooming back and fourth on those Segway and going off to choreograph things.(Laughs)

But yeah, he was very collaborative and he’ll respond to how much the actor wants to put in. It was all a big conversation and experimenting, you know. How can we find and make this really different? And I think one of the main things was that I wanted to change up from something like Warrior and Ah Sahm. Tommy Arashikage (aka Storm Shadow) is a master. He doesn’t waste movement. He’s not as brash and cocky like Ah Sahm. He’s more focused, and when he fights it’s more about the stillness and the silence and he’s waiting for you and he’s watching you. He doesn’t even look at you in the eyes because the eyes tell lies. So he’s kind of watching your juggler and seeing how you move and that’s when he’ll go in.

MAAC: Speaking of Warrior. You’ve worked with Joe Taslim on Warrior and we all know him from The Raid. And now you got to work with Iko Uwais on this project. Can you tell us about your experience working with him?

Andrew Koji: It is surreal. Iko is a funny, lovely guy. You see him as the badass that he puts on screen but he’s just a regular, lovely, fun loving dude. He’s a very humble guy, lovely person. It was surreal man, just because I had long since given up this idea. I was just wanting to act since around 20 years old. But before that I was fascinated with martial arts and martial arts cinema. And so when I saw The Raid, I don’t remember how old I was, but Joe Taslim and Iko stood out to me. I thought these guys are amazing. The film obviously rejuvenated martial arts cinema in a way. So the fact that somehow I’ve ended up working with both of them. Yeah, I’m very honored. They’re very talented and lovely human beings.

MAAC: That’s really great! With this being Henry Golding’s first foray into the action genre, did he hold his own during your fight scenes together?

Andrew Koji: Yeah, he did. He did. I mean, he needs to keep up a little bit with me.(Laughs)

But yes, he did. He dove in and did as much as he can. It’s sort of like with Warrior, I had to go from zero to 100. Very, very quickly. You train for a month and a half, two months. As a martial artist, that’s still not that much time really. It’s a lifetime’s dedication. So it’s tough. I think he did an admirable job.

MAAC: Well, Andrew, thank you so much for your time. But before we let you go, I want to congratulate you on the renewal of season 3 of Warrior. We are definitely looking forward to that and of course Bullet Train as well.

Andrew Koji: Thank you so much, man. We’ll have to go all in on Warrior season 3 for you!

MAAC: We actually spoke with Jason Tobin a few weeks ago and he can’t wait to get back at it with you on season 3.

Andrew Koji: Yeah, I miss him. We’re all gonna be a couple years older. That’s so crazy you know. It’d be good to go back. Thank you very much. Take care!

MAAC: Thank you so much, Andrew.