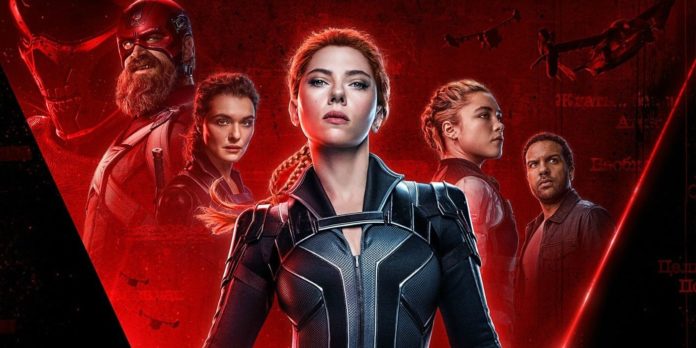 Considering she was first introduced way back in Iron Man 2 (2010), it has amazingly taken fan favourite Natasha Romanoff (Scarlett Johansson) over ten years before being awarded her own solo vehicle in the MCU.

The release of Cate Shortland’s Black Widow is something of a bittersweet affair, not only due to it being the first MCU movie to be released straight to streaming (simultaneous cinema showings are available in certain areas) but also because it is ultimately a disappointment.

Set between the events of Captain America: Civil War (2016) and Avengers: Infinity War (2018), Black Widow fills in the blanks of what Natasha Romanoff was doing during this time. We are shown her life as a child, with the movie opening in 1995 where she is living with her surrogate family who are secretly Russian sleeper agents.

Escaping to Cuba, Natasha is separated from her family and sent to the mysterious Red Room for training by Russian General Dreykov (Ray Winstone). From there we fast forward 25 years later where Natasha is on the run for violating the Sekovia accords.

Whilst hiding out she is sent a parcel by her estranged sister Yelena Belova (Florence Pugh) which leads her to Budapest. This brings about a tense reunion for the pair, with the two having to team up to uncover a conspiracy linked to their past.

Facing off against enemies old and new means they are going to need help, with the two having to seek out the help of their surrogate parents, super soldier Alexei Shostakov (David Harbour) and retired Black Widow Melina Vostokoff (Rachel Weisz).

While a fairly solid action movie, Black Widow is ultimately a second tier Marvel release and certainly not the classic sendoff that one of the MCU’s most iconic characters deserves.

To be fair, it is a well produced actioner with finely choreographed action scenes. Director Cate Shortland certainly keeps the pace moving, and considering this is her first time helming an action movie, she shoots the action scenes with a sure sense of style (although I’m unsure how much this may be due the 2nd unit employed).

The majority of the action is more grounded than some previous MCU movies, favouring down and dirty martial arts, shootouts and car chases more akin to the Bourne Identity than Avengers: Endgame. A Budapest car chase is a definite delight and one of the film’s better realised action scenes. Of course the action still has its fantastical elements, with our characters taking much more punishment than is humanly possible.

It is only during the over the top finale that the laws of physics disappear, with the action falling straight into fantasy territory, which jars somewhat with the action that has come before. It also doesn’t help that no matter how big and explosive the finale is, it fails to live up to the quality of any of the film’s earlier action scenes.

Like many films of the MCU, there is an over reliance on CGI, some of which isn’t exactly the best of quality. This has always been an issue. Maybe it is down to scheduling but there are always some ropey effects shots inserted in what is otherwise quality work. It is especially noticeable during Romanoff’s first confrontation with Taskmaster with the effects work employed for an explosion being surprisingly poor.

I felt the overall movie started to take a dip in quality around the halfway mark, with the introduction of possibly the MCU’s weakest villain to date who comes in the shape of Ray Winstone’s Dreykov This is probably the poorest performance of Winstone’s career, with his attempts at a Russian accent being laughable.

Still, it isn’t all Winstone’s fault with him having very little to play with. Dreykov is extremely one dimensional with his motivation being paper thin. To be honest, I’m still not one hundred percent sure what his ultimate goal was. Sure he is training and brainwashing Widows, but his actual endgame isn’t made clear, well at least not to me.

However, there is a poorer developed character than Winstone’s. That plaudit goes to the film’s treatment of Marvel villain Taskmaster, who here is given such a massive overhaul from his original iteration to become unidentifiable. I thought Kevin Feige would have learned his lesson from fans’ displeasure over their treatment of The Mandarin in Iron Man 3 (2013), but personally I think this is possibly worse.

Screenwriter Eric Pearson, working from a story by Jac Schaeffer and Ned Benson, turns one of Marvel’s more iconic villains into what feels like a low rent Snake Eyes clone. The changes they have made to the character seem mostly unnecessary, turning a character with the potential to be a main villain into a throwaway henchman.

At least Pearson manages to inject some humour into proceedings but his script definitely is below par when put alongside the other films he has worked on within the MCU i.e. Thor: Ragnarok (2017).

Still, even with some script issues the film still has its advantages. Scarlett Johansson is once again solid as Romanoff, throwing herself into the middle of the action. Standouts are her one on one fight with Florence Pugh’s Yelena. In fact, most of her scenes with Pugh standout, with their sisterly rivalry being one of the more interesting dynamics of the film.

Pugh certainly holds her own in both the dramatic and action stakes. It is clear the producers have plans for Pugh moving forward, with it being more than likely her taking on the Black Widow mantle somewhere down the line.

As well as Johansson and Pugh, there’s also David Harbour who almost steals the show as Alexei Shostakov a.k.a. Red Guardian. While mostly played for laughs, Harbour gives his character genuine heart, adding in some pathos to a character who should have been Russia’s answer to Captain America instead of the washed up convict he has become.

My main gripe with the character is that he isn’t given his own kick ass action scene. Even when he gets involved in the action during the finale he is merely a punching bag for Taskmaster. This seemed a wasted opportunity, especially when his comic book counterpart is as powerful, if not more than Captain America.

Rachel Weisz is slightly wasted but as always manages to shine no matter the role. It would have been nice for her to get more involved in the action but she does well with what she’s given. She at least handles the more dramatic/emotional scenes with considerable skill.

Honestly, the more dramatic scenes between the made up family unit of Johansson, Pugh, Harbour and Weisz probably work the best in the film. This is probably due to the fact that director Cate Shortland is more known for this type of fare, having directed weighty drama’s such as Somersault (2004) and Lore (2012).

To be honest, there is nothing in Shortlands back catalogue that would make me think she was a suitable choice to helm this film, and in some regards I’m still not 100% sure she was the right choice. However she still gets mostly good performances from her cast (bypassing Winstone) and proves that she can at least handle a larger scale film than what she is used to.

Of course all of this is just my opinion. No doubt others will disagree which is fine, as I would still recommend them to view the film as it’s part of the ongoing MCU. I would just advise to perhaps lower your expectations (unlike I did), that way you will hopefully get more from it.

It’s not all bad for the MCU, as the recent Loki (2021) has been going from strength to strength and the upcoming Shang-Chi and the Legend of the Ten Rings (2021) is shaping up to be a great martial arts fantasy. There is also Eternals (2021) and Doctor Strange in the Multiverse of Madness (2022) amongst a host of other Marvel productions for us to look forward to.