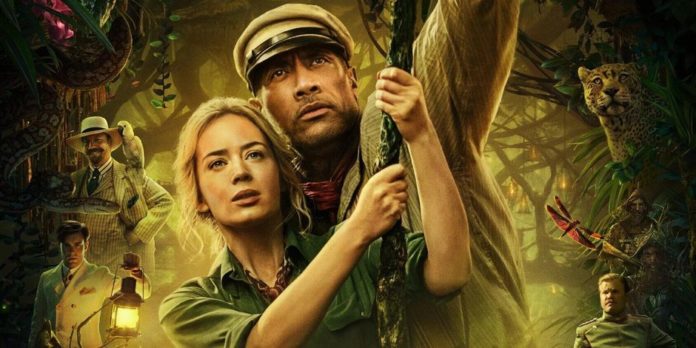 While Disney continue to court controversy over their handling of the release of Black Widow (2021), they have forged ahead with their latest blockbuster Jungle Cruise, which like Black Widow has also found itself victim to a simultaneous cinema and streaming release.

It has taken some time for Jungle Cruise to reach the screen, not only in part to Covid-19 delaying its release. The film has actually been in pre-production since 2004, where it was developed after the success of Pirates of the Caribbean: The Curse of the Black Pearl (2003). Clearly it went into development hell like many of these big budget movies do.

It was announced at one point that it would star both Tom Hanks and Tim Allen, but this iteration of the film was not meant to be, with it then being redeveloped into a vehicle for Dwayne Johnson. Even from there it hasn’t been plain sailing, with the release being put back a full year before finally going to Disney+ and in theaters.

I must admit, I had low expectations for Jungle Cruise, but in a way this is to the film’s favour. Unlike Black Widow, it didn’t come as part of an ongoing franchise that it would have to compete against. In many ways, partly to do with these lowered expectations, I enjoyed Jungle Cruise a great deal more than Black Widow’s final farewell.

Of course this is in not to say that the film is perfect. The film does have a number of issues that stops it from being an overall success but it gets the most important part right of any adventure film, a sense of fun.

Like most modern made adventure movies, it is heavily influenced by Raiders of the Lost Ark (1981), with some of the African Queen (1951) thrown in for good measure. There are even touches of Werner Herzog’s Aguirre, the Wrath of God (1972) which was surprising as I was initially unaware of what the plot entailed other than the barest minimum.

Based on Disney’s theme park ride of the same name, Jungle Cruise covers the exploits of Dr Lily Houghton (Emily Blunt), which along with her brother McGregor (Jack Whitehall) are searching for the Tree of Life, rumoured to be situated in the Amazon Jungle. Legend has it that one petal from the tree has the power to cure all ills.

The key to locating the tree is enclosed in a recently acquired arrowhead that Lily steals from the Royal Society. From there they flee to the Amazon in the hope of finding the Tree. But before they can find it they will need a guide. Their guide comes in the form of Frank Wolff (Dwayne Johnson), a riverboat guide struggling to make ends meet, who ends up conning his way into becoming the leader of their expedition.

Their journey isn’t all plain sailing though, as not only do they have to deal with the machinations of the demented Prince Joachim (Jesse Plemons), who is also searching for the tree but deal with the immortal Conquistador Aguirre (Edgar Ramirez) who requires the tree to free himself from the clutches of the Amazon itself.

It is clear that director  Jaume Collet Serra is no stranger to action, having helmed some of the best of Liam Neeson’s non Taken (2010) efforts such as Unknown (2011) and Run all Night (2015). Jungle Cruise is certainly the largest production he has worked on to date, with a reported budget of $200 million.

Even with a run time of over 2 hours he keeps things moving at a good clip, with his talented cast getting involved in a handful of exciting set pieces that will keep pulses racing. The best of these take place in and around the Brazilian port Frank operates from. Incorporating a foot chase, hand to hand fighting and culminating in some large scale destruction courtesy of Plemon’s submarine, it is definitely one of the films best action scenes as well as a taste of what is still to come.

The only issue with some of the action is the use of CGI. I don’t mind CGI in action scenes, and for the most part it is off a high quality in Jungle Cruise, but like many recent Disney productions (looking at you Black Widow), the effects work is sub-par. The worst offender is when they use a de-aging effect on Dwayne Johnson during a flashback. Not only does it look terrible it was totally unneeded.

However, the issues that I mentioned previously aren’t really to do with the action or CGI but more to do with the somewhat formulaic script and slightly one note characters. Although screenwriters Michael Green, Glenn Ficarra and John Requa do make some attempts to make their characters appear more 3 dimensional than is expected.

This is most apparent in Jack Whitehall’s character. Whitehall has terrific fun as Lily’s effete brother McGregor, having some of the film’s best lines. Some viewers online (or even those who haven’t viewed it) have complained about Disney being seemingly afraid to implicitly state how a character is gay, instead having his character imply it by telling Frank a story. However, I found it refreshing that the writers were able to include this in what is an otherwise family adventure film. Not only that, the fact McGregor is gay isn’t dwelled upon and isn’t what truly defines his character.

In terms of Dwayne Johnson, he essentially plays what audiences have come to expect: Dwayne Johnson. And that’s fine as his persona fits in perfectly with this type of film, with his charisma and action chops shining through. In terms of the action there isn’t anything on the scale of Fast Five (2011) or Hobbs and Shaw (2019), but he still holds himself well.

He even manages to strike up some chemistry with Emily Blunt, who it may seem is an unlikely pairing at first, but the two of them seem to make it work with their bickering romance being reminiscent of Michael Douglas and Kathleen Turner in Romancing the Stone (1984).

I was somewhat surprised in Blunt’s character, with her initially being quite annoying. I do feel this was intentional though, further emulating the Romancing the Stone like relationship, although Johnson’s Frank must have the patient of a saint to put up with some of her behaviour.

On the villain side we have the always great Jesse Plemons as Prince Joachim, who is also searching for the Tree of Life and doesn’t care what he has to do to find it. Plemons is hilariously over the top, with him seemingly incorporating German director Werner Herzog’s accent into his performance. I suppose this is fitting considering the inclusion of Aguirre as the film’s other antagonist.

Unfortunately Edgar Ramirez is mostly wasted in his role as the doomed Aguirre, with the overuse of CGI overshadowing what could have been a worthwhile performance. It reminded me of Javier Bardem’s role in Pirates of the Caribbean: Dead Men Tell No Tell (2017), where it seemed the CGI just got in the way. I don’t think it’s any coincidence that both these films are Disney productions.

It appears Hollywood still doesn’t know what to do with Ramirez, with him usually wasted in roles that are beneath his talents. I would want anyone who has only seen his American films to seek out the terrific mini-series Carlos (2010) from director Olivier Assayas to get a true feel of what he is capable off.

Talking of wasted talent, there is also Paul Giamatti who appears briefly as harbour master Nilo but is totally underused. I was hoping he would reappear as the film progressed but other than a brief showing this was not to be.

I must say, I did enjoy the score by James Newton Howard, with it being a fitting accompaniment to the on screen action. I especially liked his incorporation of the Metallica song Nothing Else Matters which he unexpectedly uses during the opening sequence and later, where Frank explains the backstory of Aguirre. It is surprising how well it works considering the genre of film Jungle Cruise fits under.

At the end of the day, Jungle Cruise isn’t going to be anyone’s favourite film of the year but it is still a fun time at the movies and will entertain any unassuming cinema (or streaming) goers. It also works in whetting the appetite for Jaume Collet Serra and Dwayne Johnson’s next collaboration, Black Adam (2022). You can probably guarantee that it will top their work here.