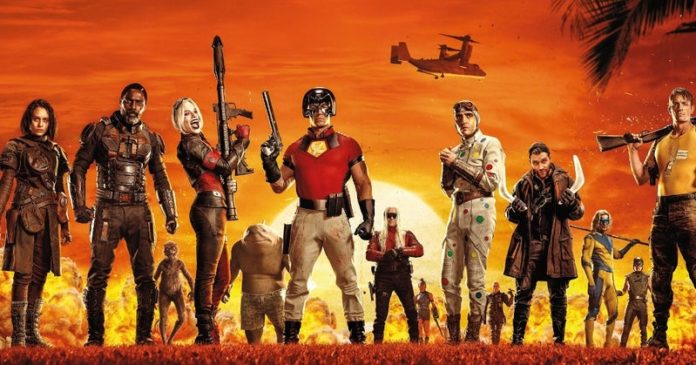 Released to cinemas a week earlier in the UK, James Gunn’s The Suicide Squad is finally showing Stateside with a similteanous cinema and streaming release. Early trailer teased that Gunn’s take on the property would be a major improvement on its predecessor, David Ayer’s Suicide Squad (2017).

Perhaps it’s doing Ayer’s original a disservice to compare them, as Ayer has notoriously went on record stating that his take on The Suicide Squad was ruined by studio interfernce and that what finally ended up on the screen was nowhere close to his vision.

Still, it is impossible not to compare the two, with Gunn’s film working somewhat a semi-sequel to Ayers film, sharing a number of the same characters and cast members. However, make no mistake, that is the only real similarity as this entry of the franchise is an altogether different beast, filtered through with the same irreverent vision Gunn brought to the Guardians of the Galaxy (2014) but with added blood and F bombs.

Their mission is to infiltrate the island of Corto Maltese to destroy Jötunheim, a Nazi-era laboratory that houses “Project Starfish”, a secret government experiment. As expected, things don’t exactly go to plan, with the team being ambushed, leading to the deaths of a number of the squad. Now it is up to the remaining team members to reunite and complete their mission. To do so they must find scientist Dr. Gaius Grieves (Peter Capaldi), who has been secretly working on “Project Starfish” and coerce him into assisting them.

It’s no surprise that Gunn has gone and turned in one of the DCU’s more unique films, filling the screen with the expected humour and crazy action he has brought to his previous work. Even when working with a $180 million budget he hasn’t lost those sensibilities he honed whilst working for Troma.

Gunn has reportedly claimed that he was given carte blanche to bring his vision to the screen, which quickly becomes apparent by its literal use of swear words and the amount of blood and gore he employs during the action scenes. Clearly the director is having fun and that fun is imprinted all over the film.

And to think Gunn might have not gotten the job until Disney unceremoniously sacked him after decade old tweets began circulating online. He was quickly snapped up by Warner Brothers and began developing their Suicide Squad sequel after a number of false starts.

At one point the likes of Mel Gibson were being courted to helm the sequel, with Gavin O’Connor even being hired to write and direct at one point before leaving the production, apparently frustrated over Warner Brothers development of Bird of Prey (2020) which supposedly had many similarities to his take on The Suicide Squad. His version was rumoured to feature the first appearance of Dwayne Johnson’s Black Adam who would feature as the main villain, with Joe Mangianallo’s Deathstroke also set to appear.

While it would have been great to see what O’Connor would have brought to the series, I think his take on the property may have had some of the same issues as Ayer’s original. One of the main problems with the first film was that it was overly serious. Sure it had some funny dialogue but it was lacking that sense of fun required for a film of its type.

That isn’t the issue here as Gunn fills the screen with humour. This isn’t to say the films is an out and out comedy. He is careful to give his characters depth and emotion, with even those who you may initially find ridiculous i.e. Polka Dot Man, being developed more than expected.

The action scenes are all terrifically staged, with a mixture of shootouts and hand to hand battles, with our anti-heroes even having to square off against a Kaiju.

The opening battle on the beach of Corto Maltese is brief but gives a taste of what’s to come, with Gunn proving that you really shouldn’t get too attached to certain characters as they could be dispatched in an instant. Although I expected certain characters to die I was surprised by the carefree abandon that Gunn takes in killing off his characters.

This is by far Margot Robbie’s best outing as Harley Quinn, overshadowing the extremely disappointing Birds of Prey. As usual she is the wild card of the team, and the only member that is clearly insane. Gunn gives her one of the film’s best action scenes, with her escape from her captors seeing her facing off against countless soldiers in a well choreographed shootout come fight scene. Gunn’s use of colour and animation to show the mental state of Harley is also a nice touch, with her victims blood being replaced by tweety birds and animated flowers.

Although The Suicide Squad is essentially an ensemble, Idris Elba’s Bloodsport is ostensibly the lead. Elba is a new addition to the cast, replacing Will Smith’s Deadshot from the first movie after he decided not to reprise the role. It was initially thought Elba would be playing the same role as Smith, but it was decided that he should play someone different in the chance that Smith chose to return to the franchise further down the line.

In some respects the film version of Bloodsport is somewhat similar to Deadshot, with both being perfect shots who are only joining the squad to give their daughter a better life. Thankfully, Elba does enough in the role to distinguish the character from Deadshot. Elba’s charisma shines through, with Bloodsport being one of his better Hollywood outings.

I found it refreshing that the relationship he has with his daughter wasn’t the typical sugar coated type. When she informs him she is in trouble with the law, he is more disappointed that she got caught than the fact she committed a crime. Still, it is clear he cares for her when he joins the squad.

Almost stealing the entire film is John Cena’s Peacemaker, who gives a pitch perfect performance as the most contradictory member of the team. Peacemaker is ridiculous in the lengths he will take for there to be peace, ironically killing anyone who would jeopardize it. Cena plays the role entirely straight, seemingly oblivious of how absurd he appears. Gunn was clearly a fan of what Cena brought to the role, with Peacemaker getting his own show which will be coming next year.

Other than Margot Robbie’s Harley Quinn, the only other original cast member to play a lead role is Joel Kinnamen’s Rick Flag. Like the first film he is mostly the straight man, playing the most normal member of the team, although unlike the first film he gets the chance to inject some humour and personality into his character. Flag is increasingly more likeable than he was in the first film.

I also got a kick out of Peter Capaldi’s very Scottish take on The Thinker. He gives the squad a few choice put downs which I found hilarious. Probably best known for Doctor Who in the U.S. it was nice to see him in yet another fantasy role, albeit one far removed from the heroic doctor.

Shoutouts should also go to Daniela Melchior as Ratcatcher 2, here making her English speaking debut. She brings much needed heart to proceedings, with her character being the emotional lynchpin the squad needs. Similarly, David Dastmalchian brings unexpected emotion to his role as Polka Dot Man, making one of the most ridiculous DC characters quite a moving and tragic figure.

Even Gunn’s handling of King Shark is more sentimental as expected. Voiced by the legendary Sylvester Stallone, Shark is a clear scene stealer getting a number of standout scenes to himself that shows the sadness and loneliness this human/shark hybrid must feel. I must say, I wasn’t expecting to feel sympathy for a character like King Shark, but that’s exactly what Gunn has achieved.

There are other Gunn regulars viewers should keep their eyes peeled for, with the likes of Nathan Fillion, Michael Rooker and Sean Gunn all making an appearance, even if their screen time isn’t as long as I would have liked. Also appearing in smaller roles are Mayling Ng, Pete Davison and Jai Courtney, reprising his Captain Boomerang role from the first film. I was slightly disappointed in how little Courtney appears as he was one of my favourite characters in Ayer’s original, but considering how many characters are involved in the film I shouldn’t complain.

The Suicide Squad is the kick in the ass that the DCU needs. Fully embracing its R rating, Gunn has made one of the franchise’s best features to date. With this and Zack Snyder’s Justice League (2021), it is clear that Warner Bros should be focusing their attention more towards adult audiences rather than trying to make everything PG-13.

Now I’m not saying an R rating automatically makes for a good film, but when done properly it can make all the difference, especially when dealing with a property like The Suicide Squad. It will be interesting to see how well the film does financially. Hopefully it proves to be a success as Gunn has recently stated he has further plans to work with DC.

I would urge anyone to see The Suicide Squad in a cinema if at all possible (as long as its safe to do so). It really deserves to be seen on the largest screen possible.

Gunn hasn’t rested since completing The Suicide Squad, with him already having directed five episodes of the previously mentioned Peacemaker television show. He will next be going off to direct the eagerly awaited Guardians of the Galaxy Vol.3, which I am sure will be yet another success for him.