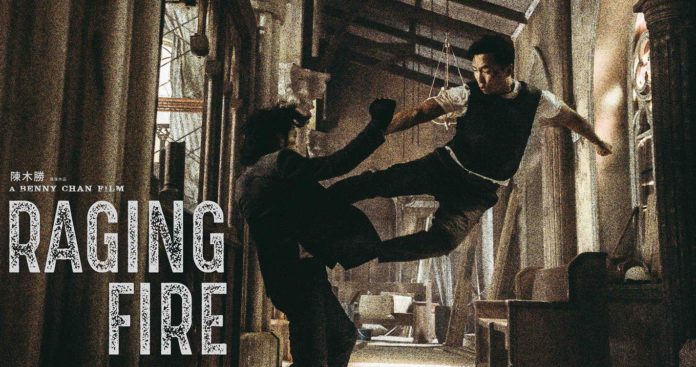 For many martial arts movie fans, Benny Chan’s Raging Fire will no doubt be the most anticipated film of the year. Already opening in China to great reviews, it is due to be released stateside thanks to the good people at Well Go USA. Filled to the brim with bone crunching fight scenes, explosive shootouts and high speed car chases, Raging Fire proves to be one of the best action films of the year.

Donnie Yen plays hardboiled detective Shan who is renowned for his dedication in closing dangerous cases. Due to his self-righteous attitude he finds himself ostracised by the higher ups who don’t like the fact that he is unwilling to turn a blind eye to certain crimes. This attitude comes back to bite him with the return of old colleague Ngo (Nicholas Tse), who after being sent to prison for manslaughter comes back with a vengeance. Ngo and his team plan to take out anyone and everyone they feel wronged him, with Shan being directly in their path.

There is a slight tinge of sadness over the release of Raging Fire. This marks the final completed film of legendary director Benny Chan before his untimely death at the age of 58 due to nasopharyngeal cancer. To say his death is a terrible loss is an understatement. Not only was his death a great loss to his friends and family but also to movie goers, with him having directed some of the best Hong Kong action movies of the last 4 decades, with the likes of Moment of Romance (1990), New Police Story (2004) and Call of Heroes (2016) amongst them.

Additionally, Yen and Chan had collaborated years before on the popular TV series’ The Kung Fu Master (1994) and Fist of Fury (1995), so it was nice the two got to team up once more before Chan’s passing.

Even though he was ill during the production of Raging Fire, the completed film finds him firing on all cylinders, once again showing off his skills at helming large scale action. His work here is somewhat reminiscent of his earlier actioner Big Bullet (1996) with its mixture of high octane gunplay and character drama.

Having written the script alongside Ryan Ling and Tong Yiu-ling, Chan gives his leads a bit more character development than is typical of Hong Kong action movies. I’m not saying he’s changing the wheel here, but it was nice to see scenes of Yen’s life outside of the station. We get glimpses into his home life, with him having a pregnant wife ready to give birth any day. Of course, you ultimately realize that the writers will revert to cliché and put her in peril later in the film, but at least it was a change from the usual lone brooding cop who only has his job to keep him company.

The villains are also given a bit more depth than usual, with them once being good guys until circumstances moved them into a life of crime. Throughout the film we are treated to a series of flashbacks that shows us what led them to become criminals. They seem to have forgotten everything they once were, willing to kill anyone who gets in their path.

Anyone who has seen previous Benny Chan movies will know the man likes his explosions, and Raging Fire certainly has its fair share, mostly during the bullet strewn climax which finds Yen and his men squaring off against Tse’s robbers. This sequence is a real standout in a film already with jaw dropping action. Somewhat Inspired by Michael Mann’s Heat (1995), the shootout takes place throughout the traffic filled streets of Hong Kong with countless civilians getting harmed in the crossfire. It is both bloody and bombastic and one of my favourite action scenes of the year so far.

As well as the finely choreographed destruction of the finale, a shootout come fist fight through a Hong Kong slum is another winner, with the scene culminating Yen squaring off against the underrated Ben Lam. While the two had previously starred in Flash Point (2007), the opportunity for the two to face off never arose, with the last time the two went up against each other being Yen’s directorial debut Legend of the Wolf (1997).

On a side note, anyone impressed by Lam should check out his solo vehicle Angry Ranger (1991) if they have the opportunity. Produced by Jackie Chan it gives Lam a chance to shine in a starring role rather than typically being support. While the plot is cliché ridden, it has a number of gritty and hard hitting fight scenes that make it worthwhile.

Like the best of his modern day actioners, Donnie Yen not only stars but was also action director. In front of the camera he gives the role his all, with him throwing himself straight into the action. He takes part in numerous painful looking action scenes where he ends up bruised and battered. Yen would have been 56 at the time of production and it’s remarkable to see that he hasn’t really slowed down from when he first came on the movie scene. His fight scenes have the energy and power of a man half his age.

It’s not all fighting for Yen, he even gets a chance to show off some emotion here, with his sadness over the death of his friend being portrayed well. He also conveys the anger he feels over what is essentially a betrayal from someone he once considered a friend.

In terms of his work behind the scenes as action director, there is a lot more gunplay here than his other modern day action films. There’s a good balance between the shoot outs and fights, with Yen choreographing a number of crowd pleasing scenes. The previously mentioned fight with Ben Lam is a highlight but pales in comparison to the finale, where as expected he goes up against Nicholas Tse. While maybe not on par with the legendary fight between Yen and Wu Jing in S.P.L, the fight between the two is fantastic, with the two seemingly moving at lightning speed.

Yen is assisted in the action by Ku Huen Chiu and Kenji Tanigaki. I could certainly see the influence of Tanigaki as some of Tse’s moves being reminiscent of his work in Rurouni Kenshin (2012). At least his work here can be clearly seen, unlike the Hollywood hack job that was recently carried out on his choreography for Snake Eyes (2021).

Donnie Yen isn’t the only past collaborator of Chan’s to appear in Raging Fire. One of Nicholas Tse’s first leading roles was in Chan’s Gen X Cops (1999). The two would team up further on New Police Story (2004), Invisible Target (2007) and Shaolin (2011), not including his cameo appearance in Rob-B-Hood (2006).

His role in Raging Fire is probably the best he has been given in a Chan movie, with Tse giving a suitably intense performance. Ngo is very much in line with Tse’s villainous role in Shaolin, but ramped up to eleven. He has very little redeeming features, with him being a completely ruthless son of a bitch. He is willing to kill whoever gets in his way, even if they are his friends.

Tse has played bad guys before, but Ngo is probably the worst. It’s good to see Tse embrace his dark side and I would like to see him play similar roles going forward as of late he has mainly been appearing on cooking programmes.

Also making an impression in smaller roles are the likes of Patrick Tam, Qin Lan and Kenny Wong. Martial arts fans should also keep a look out for Donnie Yen protégé Kang Yu who has shared the screen with Yen on numerous occasions, most memorably going toe to toe with him in Big Brother (2018).

As well as those, Hong Kong movie veteran Ray Liu shows up for an extended cameo, even getting in on the action during the violent opening. Strangely, he doesn’t seem to have aged in the past 30 years. It is hard to fathom that he is now 64 years old. He isn’t the only veteran Hong Kong star to show up, but I’ll leave those as a surprise.

Raging Fire is easily one of the best action films of the years, and although it has some minor issues such as some inferior CGI, it will be hard to top. It is definitely a film that deserves to be seen on the big screen wherever that is possible. It is a fitting legacy to Benny Chan’s career as well as whetting the appetite for Donnie Yen’s upcoming appearance in John Wick: Chapter 4 (2022).